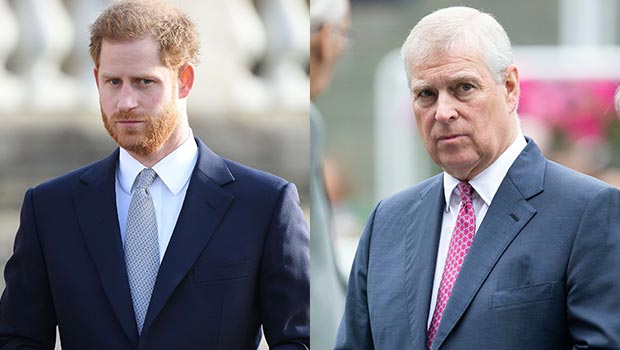 Prince Harry finally broke his silence about the sexual abuse allegations against his uncle Prince Andrew that involved ties with Jeffrey Epstein. The Duke Of Sussex, 38, blasted Andrew’s “embarrassing scandal” in his upcoming memoir Spare, bringing up the fact that his uncle’s security was not removed despite Harry and Meghan Markle losing theirs after “stepping down” from royal duties.

“Despite being involved in an embarrassing scandal, accused of having sexually abused a young woman, nobody had suggested removing his security,” Harry wrote in the book per the New York Post on Jan. 8. Notably, Prince Andrew was linked to the late Epstein, who died by suicide in prison after being convicted of sex trafficking with Ghislaine Maxwell. Through the scandal, Prince Andrew maintained his security — however, was relinquished of his Duke of York title as well as military titles in Jan. 2022. Around the same time, he reached a settlement with accuser Virginia Roberts Giuffre — but terms were never made public. He’s since denied allegations made, but said he believes Giuffre was a “victim of abuse.”

“People may have a lot of grievances towards us, but sexual offenses weren’t one of them,” Harry then added of his and Meghan’s decision to step back from their roles as senior royals. At the time, the couple had temporarily relocated to Vancouver Island, Canada before making the choice to settle in Montecito, California — about an hour out of Meghan’s hometown of Los Angeles.

In Spare, which is being released by Penguin Random House, Jan. 10, Harry also says he didn’t believe the Royal Family would remove his security due to what had happened to his mother Princess Diana. Diana’s youngest son described being in a “climate of hatred” directed at himself and Meghan, who he wed in 2018.

After losing security, Harry issued a public statement saying that he could no longer afford police protection. “Prince Harry inherited a security risk at birth, for life. He remains sixth in line to the throne, served two tours of combat duty in Afghanistan, and in recent years his family has been subjected to well-documented neo-Nazi and extremist threats,” the statement, issued in January 2022, read. “While his role within the Institution has changed, his profile as a member of the royal family has not. Nor has the threat to him and his family,” it also stated.