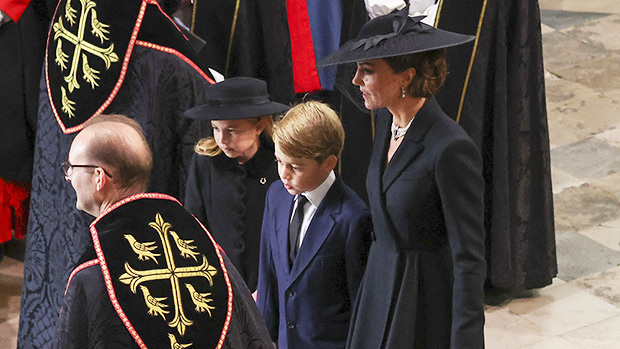 The Royal Family came together to mourn Queen Elizabeth II with her official funeral on Sept. 19. Of course, the Queen’s great-grandson, Prince George, 9, was in attendance to honor his great-grandmother (George’s younger brother, Prince Louis, 4, was too young and did not attend). The future King was on his best behavior for the event, which took place 11 days after Her Majesty’s death on Sept. 8. He looked like the perfect young gentleman in his navy blue suit as he walked into the ceremony alongside his mom, Kate Middleton, and younger sister, Princess Charlotte. Charlotte was all grown up, as well, in her black coat and matching hat. Once The Queen’s coffin entered the building, George joined his father, Prince William, to walk behind it down the main aisle.

George, Charlotte and Louis had started school just one day before The Queen’s death, and looked adorable in the official photos heading to Lambrook. George and Louis twinned in their school outfits, with each of them holding mom, Kate’s, hands as she walked them inside. Meanwhile, Charlotte was too cute in her blue dress and she held hands with dad, Prince William, for the entrance.

The Queen’s death means the line of succession has moved up, putting George one step closer to the throne. William’s father, King Charles III, became King immediately following The Queen’s passing, and, as Charles’ oldest son, William will be next to take the throne. George follows his father in the line of succession, which means he will become King after Prince Williams’ death.

The Queen was 96 years old when she died at Balmoral Castle in Scotland on Sept. 8. Just two days before her death, The Queen made her final public appearance, where she officially invited Liz Truss to become the U.K.’s new Prime Minister. In June, she celebrated her Platinum Jubilee, marking 70 years on the throne. Throughout 2022, The Queen has faced some health issues, including a battle with COVID in February. However, she continued to make public appearances throughout the year when she was healthy enough to do so.