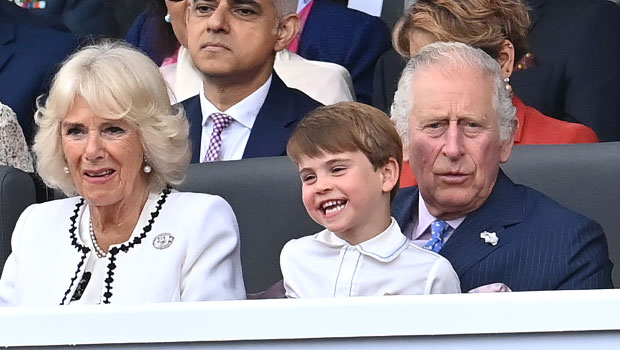 Prince Charles proved a proud grandpapa during the Platinum Jubilee celebration at Buckingham Palace over the weekend. The future king of England, 73, was spotted bouncing his grandson, Prince Louis, on his knee while they took in all the extravagant festivities in honor of his mother, Queen Elizabeth’s, 70 years as monarch. Seated next to his wife Camilla Parker-Bowles, Charles was all smiles as he held the royal 4-year-old close.

The youngest of Kate Middleton and Prince William’s brood looked to be having quite the splendid time at the bash, as he reacted to the activities with adorable, animated expressions. He even stuck out his tongue and held up his fingers towards his mum, who hilariously tried to put a stop to his antics immediately. His siblings, Prince George and Prince George, sat beside him and tried their best to stay composed. Prince William flanked the family, so perhaps the eldest kids were keener to behave! Overall, the gorgeous royal family appeared quite pleased to be watching the soiree from the front row!

In February, while congratulating the Queen on her Platinum Jubilee, Prince Charles said he was “deeply honored” that his mother wished his “darling wife” to take the title of “Queen Consort” when he becomes King. The move was welcomed by the Royal family as there had been suggestions Camilla might use the title of “Princess Consort” due to remaining public tensions over the tragic 1997 death of Charle’s first wife Princess Diana.

“On this historic day, my wife and I join you all in congratulating Her Majesty The Queen on the remarkable achievement of serving this nation, the Realms and Commonwealth for seventy year,” Charles wrote in his message, before referencing the Queen’s wish for Camilla. “We are deeply conscious of the honour represented by my mother’s wish. As we have sought together to serve and support Her Majesty and the people of our communities, my darling wife has been my own steadfast support throughout.”

In the Queen’s statement released on February 5, she confirmed her desire for Camilla to take the title of “Queen” after her death, writing, “And when, in the fullness of time, my son Charles becomes King, I know you will give him and his wife Camilla the same support that you have given me; and it is my sincere wish that, when that time comes, Camilla will be known as Queen Consort as she continues her loyal service.”