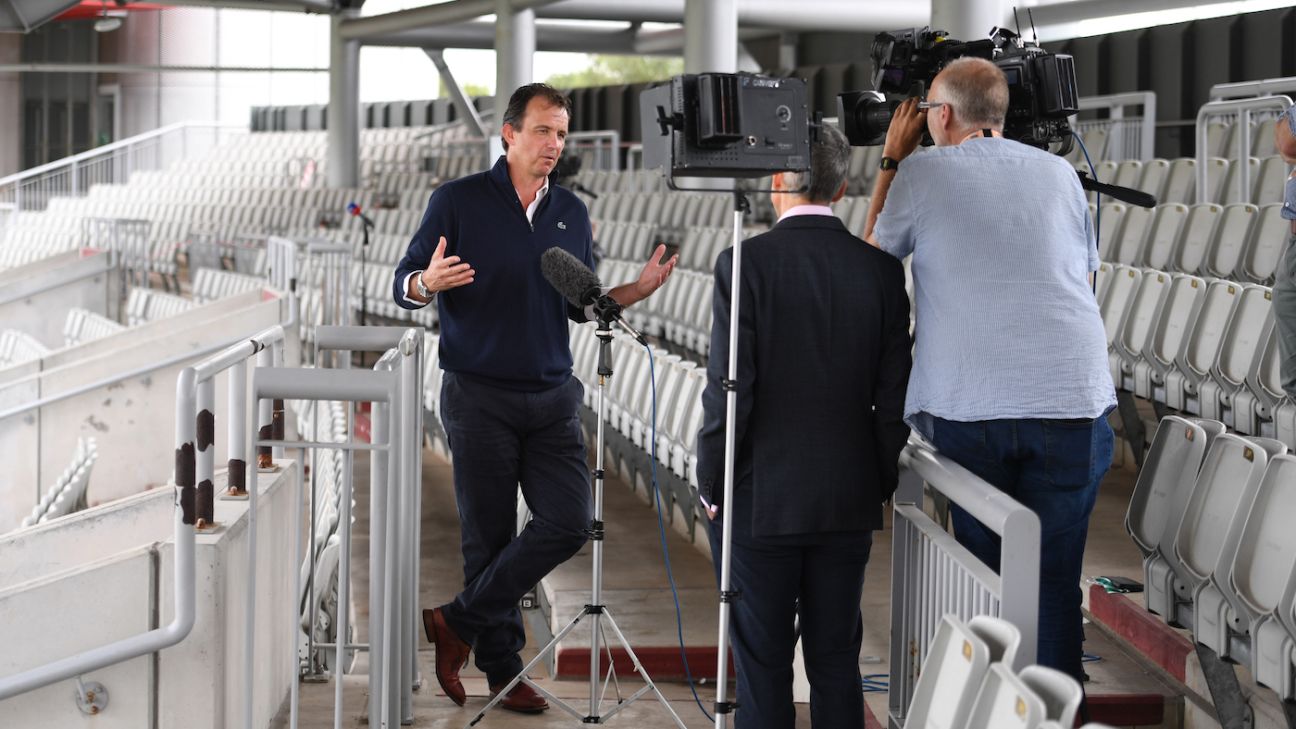 Does anyone remember Chris Dehring? Those of a certain age might raise an eyebrow of recognition at a name that, in the years leading up to the 2007 World Cup, was the ubiquitous, plausible face of West Indies cricket – first as the man who spearheaded the WICB’s successful bid, then as the Managing Director and CEO of the ICC’s rather less successful staging of the tournament itself.

It took barely 24 hours after that tournament’s farcical finish, in near total darkness in Barbados, for Dehring to disappear off the face of the game. Overnight, his mobile phone appeared to take a dive for Davy Jones’ Locker, pre-empting that of Rebekah Vardy’s agent, as he moved onwards and upwards to his next executive calling – a five-year chairmanship of Cable & Wireless Jamaica, as it turned out.

You get the sense from Tom Harrison‘s furtive departure from his seven-and-a-half year tenure at the ECB that a similar evaporation is on the cards. It’s not beyond the bounds of possibility that he might yet find his way back into a role within cricket – a sport that he played professionally as a young man and about which he does care deeply, contrary to the impression that he’s often given off. After all, there’s always room in this sport for someone who can land a good rights deal.

But after the controversies of the past few months, it’s hard to believe he’ll have any interest in a third innings in the game. In keeping with the traditions of the modern uber-executive, whatever gratitude there might have been for Harrison’s service has long since been traded in for a golden handshake – specifically his share of the ECB’s £2.1 million bonus pot, which (awkwardly) also happens to be just £100,000 less than the current level of the board’s once-flush reserves.

For the bottom line will always be the bottom line when it comes to appraising Harrison’s legacy. Even after his “we’re-all-in-it-together” gesture of a 20% pay cut during the pandemic, the ECB’s top man was still paid more than half a million pounds in 2020, and that figure rose north of £700,000 during the board’s years of plenty in the lead-up to the 2019 World Cup. No matter how weighty his responsibilities – and that era since 2015 has thrown up an abundance of crises that have required his first-hand intervention – it is still a sickening sum of money to be siphoning off from the sport, and a distracting one as well, given how much his final pay-cheque has overshadowed his dying days in the job.

The issue of remuneration cuts both ways, of course – it wasn’t so long ago that Giles Clarke, the last of the ECB’s blazer-breed who predated the onset of Harrison’s suits and shirt-sleeves, would seek to justify every one of his autocratic whims by pointing out that, technically, he wasn’t paid a penny during his tenure as chairman (although his expenses account took quite the pounding).

At the apex of cricket’s culture war sits the ongoing racism scandal – a catastrophic blow to the sport’s public image, and one that has been especially humiliating to Harrison in his final months in the role

Is it preferable that English cricket’s senior executive is a professional in the most literal sense, and an exorbitantly paid one as well, given the sums that he in turn should expect from the deals he brings in? Probably … even allowing for the dysfunction that he leaves behind him in the boardroom, where since October there has been no chairman on hand to unseat him and, until this past fortnight, no structure beneath him to oversee the most fundamental cricket-focused aspect of its existence. This speaks to a wider truth, that the ECB on Harrison’s watch has become too unwieldy to discharge its basic duties to the game. And for that he has been roundly complicit.

Tellingly, there was no mention in Harrison’s farewell press release of the most divisive aspect of his reign – his zealous driving-through of the Hundred, a competition that may have made sense on the boardroom notepaper on which it was brain-stormed, but less so when unleashed as a fourth format in an already overwhelmed summer schedule.

Instead of easing the burden on Tests as English cricket’s bread-winner, the Hundred’s existence has hastened their nosediving standards by driving four-day cricket out of the summer’s prime months. And if anyone knows of the whereabouts of 50-over cricket – the format that England ghosted on the morning of July 15, 2019 after a passionate four-year affair – approximately 4.5 million casual viewers on Channel 4 might be moderately intrigued to find out.

Therein lies the oddity of Harrison’s seven-year reign. It contained around its mid-point one of the greatest glories any administration could ever hope to oversee – two, in fact, if you include the magnificently “disruptive” achievement of England’s women on the same ground two years earlier. Given the chaos of his early weeks in the job in 2015, with humiliation at the preceding World Cup coupled with the unresolved saga of Kevin Pietersen’s sacking, Harrison clearly deserves some credit for setting the game’s sights on a home World Cup, a notion that his forebears in 1999 never came close to contemplating

But ultimately it was the players, not the administrators, who delivered that trophy with a display of unforgettable tenacity when the stakes were at their highest. It’s easy to forget now, but until the euphoria of that run-out in the Super Over against New Zealand, the mood music of English cricket had been a gut-clenching, gnawing dread. While Eoin Morgan’s men kept their eyes on the prize as best they could, the board was already deep into a furiously silent and NDA-littered game of tug-of-war with the counties as the Hundred spluttered unconvincingly into existence.

Harrison’s board won the argument in the end, but in breaking the counties’ centuries-old hold on the sport, it seems they broke too the ECB’s very raison d’etre. Its purpose (not always realised, mind you) used to be to draw together the various disparate strands of the game at every level, and create – at the very top of its pyramid – an England team that could win the big series, and thereby perpetuate a level of interest into each coming generation.

Ever since the ECB committed its original sin of selling the sport to the highest bidder, however, it’s not been quite that simple. Harrison wasn’t complicit in that decision, of course – and his finest hour in the job, the £1.1 billion rights deal in 2017 that brought free-to-air TV, ever so tentatively, back to the game, was an important first step in righting the wrongs of the past.

However, his fixation with revenue streams, over and above the human side of sport – and specifically with establishing the Hundred as a failsafe for the dreaded day when international cricket ceases to pay the bills – has fostered an air of rancour and barely suppressed civil war that has only served to hasten that date in the first place.

“It is about giving more people the opportunity to be part of cricket’s future” was Harrison’s oft-repeated mantra, most particularly in the lead-up to the competition’s soft-launch in May 2019, when it seemed the ECB’s preferred route to this new market was to apologise loudly and offensively about everything that the game’s existing fans held dear, and trample over generations of softly-sold affection to access the take-it-or-leave-it types at Mumsnet – for whom such well-meaning but ultimately under-delivering initiatives as All Stars Cricket were less about inculcating a lifetime’s love of the sport, and more about an hour’s childcare during the summer months.

The disdain was felt across the game – most particularly by those young enough to have been active cricketers around the time of the 2005 Ashes, and who remember both the nationwide euphoria that accompanied that summer’s Ashes, and the decade of silence that followed it. Instead of showing gratitude to a generation whose own kids are now propping up the sport’s participation levels, their fandom has been taken for granted at every turn, and their faith in the game eroded by avoidable insults – particularly on social media, where the silence that greeted the start of this year’s county season was at stark odds with the blow-by-blow updates from a distinctly underwhelming Hundred draft.

And at the apex of this culture war sits cricket’s ongoing racism scandal – a catastrophic blow to the sport’s public image, and one that has been especially humiliating to Harrison in his final months in the role.

On the one hand, the explosion of testimony from Azeem Rafiq in the first instance, and scores of others thereafter, is a vindication of Harrison’s zealous belief that the county system was not sufficiently appealing to those outside of its auspices – way back in 2015, he hired a cultural education specialist to instil in the ECB leadership a basic understanding of the game’s most populous demographics, and three years later, the South Asian Action Plan was launched to bridge the disconnect with the communities that provide some 30% of the sport’s recreational players, but just 4% of the professional game.

It’s hard to deny he recognised the issues before they had gone mainstream – and in 2020, when the Black Lives Matter movement exposed historic grievances in the game’s already withered Caribbean heritage, Harrison’s response was honest and heartfelt.

And yet, when push has come to shove on the public stage – most particularly during his desperately uncomfortable appearances before the DCMS select committees – Harrison has been reduced to a stuttering, management-speak cipher. The buzzwords with which he has ruled a succession of boardrooms hold no sway in the cut-and-thrust of parliamentary inquiry, and he was similarly scorched by Mehmooda Duke’s resignation as Leicestershire’s chair last November – Duke, the only minority-ethnic female in such a role, was understandably reluctant to be paraded as proof of the ECB’s hard-won EDI credentials.

There are aspects of Harrison’s legacy that may take time to reveal themselves fully. The strides taken in the women’s game are clear to see, for all that the England team itself is at another crossroads, and if nothing else, the configuration of the Hundred as an equal opportunities competition (if not yet equal pay…) is the most obvious means to ensure year-on-year “growth” – the capitalist dream. After all, given the current levels of investment in the format, a sport that barely had a professional footing a decade ago has nowhere to go but up.

And then there’s the stewardship of the Covid pandemic – not merely the navigation through the summer of 2020, an impressive display of on-the-hoof crisis-management (albeit tainted by the redundancies at the end of it), but the long-term attempts to manage the health and well-being of England’s players. The human cost of the bubble lifestyle is not yet fully realised, but in setting out to mitigate the impact of the players’ attempts to “keep the lights on”, Harrison tried to show he cared.

Ultimately, however, leaders can only be judged by results. And as he leaves office with the game failing by every measure that has ever exercised public opinion – be it matters of money, morals or pure sporting endeavour – there’s really no way of saying he has left the game better than when he found it.