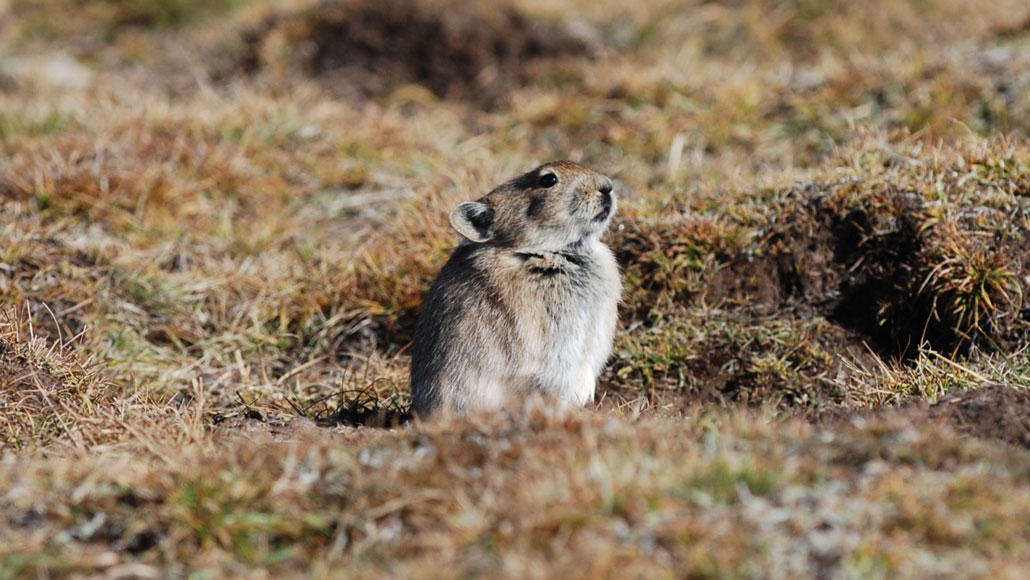 Winter on the Qinghai-Tibetan Plateau is unfriendly to pikas. Temperatures across the barren, windy highlands routinely dip below –30° Celsius, and the grass that typically sustains the rabbitlike mammals becomes dry and brittle. It would seem the perfect time for these critters to hibernate, or subsist on stores of grass in burrows to stay warm, like the North American pika.

Instead, plateau pika (Ochotona curzoniae) continue foraging in winter, but reduce their metabolism by about 30 percent to conserve energy, researchers report July 19 in the Proceedings of the National Academy of Sciences. Some pikas also resort to unusual rations: yak poop.

Camera data from four sites confirmed that pikas regularly brave the cold to forage. “Clearly they’re doing something fancy with their metabolism that’s not hibernation,” says John Speakman, an ecophysiologist at the University of Aberdeen in Scotland.

Speakman and colleagues measured daily energy expenditure of 156 plateau pikas in summer and winter, and implanted 27 animals with temperature sensors. While many nonhibernating animals keep warm in winter by using more energy, these pikas did the opposite (SN: 1/22/14). On average, pikas reduced their metabolism by 29.7 percent, in part by cooling their bodies a couple degrees overnight. The animals were also less active, relative to summertime levels.

But at sites with yaks, pikas were more abundant but even less active. That puzzled the researchers “until we found a sort of half-eaten yak turd in one of the burrows,” Speakman says. Eating excrement can cause sickness. But with few options, yak poop could be an abundant, easily digestible meal that “massively reduces the amount of time [pikas] need to spend on the surface,” he says.

The researchers caught pikas scarfing scat on video, and DNA evidence from stomach contents solidified that this behavior is common. Whether dining on dung has downsides remains to be seen, but clearly, not being too picky pays off for pika.