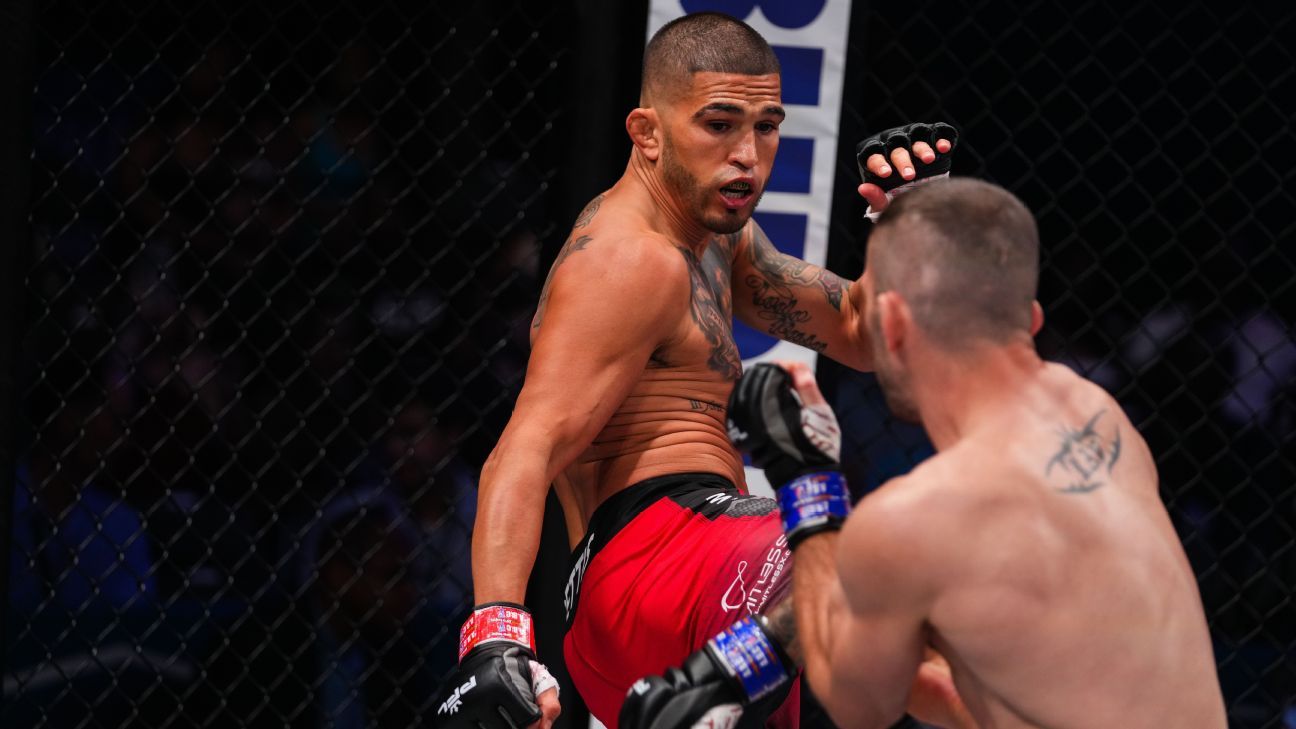 The PFL playoffs kick off this week, beginning with semifinals in the lightweight and light heavyweight divisions on Friday (ESPN and ESPN+, main card at 8 p.m. ET and prelims at 6 p.m.).

The main event inside Hulu Theater at Madison Square Garden in New York will be a rematch of a fight from just six weeks ago, as former UFC champion Anthony Pettis takes on Stevie Ray. Ray pulled off the upset in their June meeting with a modified body lock. Even with the loss, Pettis enters the playoffs as the top seed in the lightweight division.

Also on Friday’s card, top-seeded light heavyweight Robert Wilkinson takes on Delan Monte. Wilkinson looked impressive in two fights during the regular season and will try to carry that momentum into the playoffs.

With spots in the $1 million finals on the line, here’s how I see Friday’s fights playing out.

Coming off an upset win over Pettis at PFL 5 in June, Ray will be looking to have a repeat performance in the rematch. Ray needs to get the fight to the mat if he wants to get back-to-back wins against the former UFC champion. But I don’t see that happening this time around. In the first fight, Pettis looked fantastic in Round 1, as he outstruck Ray from distance and was leading the action the entire way. Look for Pettis to keep the fight standing to get the win and advance to the final. Prediction: Pettis to win.

In a battle of teammates, Silveira will have to beat a fellow American Top Team fighter, Akhmedov, in the first round of the playoffs. Akmedov has finished both of his last two opponents, while Silveira enters the matchup as an alternate. He got a highlight-reel knockout over Marthin Hamlett in his last fight. Akmedov is explosive and physically strong, but over the years we have seen his cardio fade as fights enter the later rounds. I like Silveira here. He is the more technical striker, the better wrestler, and has the cardio to push the pace for all three rounds. Look for the Challenger Series product to get the win and move on. Prediction: Silveira to win.

Aubin-Mercier, who is known for his wrestling, has been using his striking and lateral movement lately to frustrate his opponents. However, if he doesn’t wrestle against Martinez, he will find himself in a bit of trouble. Martinez is an aggressive fighter. He is constantly moving forward and has an endless gas tank, which could cause problems for Aubin-Mercier. I am going with the underdog here. Martinez showed tremendous toughness in his fight against Clay Collard and almost got the finish. I also believe his striking output may give Aubin-Mercier enough problems to take him out of his game plan. Prediction: Alex Martinez to win.

Wilkinson has looked tremendous this season. After two dominant wins during the regular season, he is getting a great style matchup in the first round of the playoffs. Monte is a tough and aggressive striker, but he tends to leave himself open to get hit and he doesn’t have a good ground game. Wilkinson, who will be the better striker, will need to avoid the power of Monte and take the fight to the ground. From there, Wilkinson can likely get a submission. Prediction: Wilkinson to win inside the distance.

Kayleb Wagner broke Derrick Henry’s rushing record. Can he get an FBS scholarship?

Teofimo Lopez won, but is he a threat at 140 pounds? Maybe not just yet