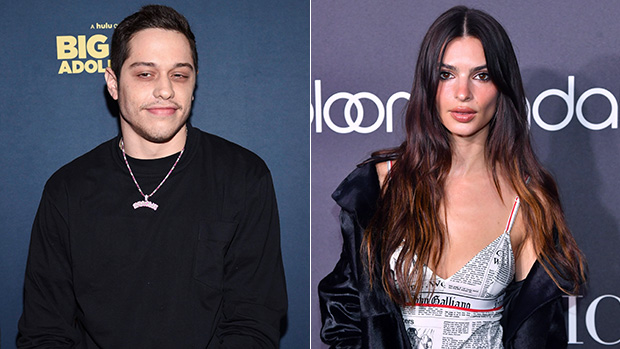 Pete Davidson and Emily Ratajkowski had a very public date night at Madison Square Garden on Sunday, Nov. 27. The hot new couple sat courtside for the New York Knicks game. There was no hiding the fact that they were together, as they chatted to one another when cameras panned their way. The two were seated next to Ben Stiller and his wife, Christine Taylor, for the NBA game, as seen in a video shared to Twitter.

NOT PETE DAVIDSON AND EMILY RATAJKOWSKI SITTING COURTSIDE FOR THE GRIZZLIES/KNICKS GAME 👀👀👀👀 pic.twitter.com/APyUdOmJtO

This was Pete and Emily’s first public outing since news broke that they were seeing each other in mid-November. Just days after the reports surfaced, Pete and Emily were spotted together for the first time. He was photographed arriving at her home in New York City, but he drove away when paparazzi began snapping photos of him. Emily emerged from her house and called for a ride once Pete departed. She was then seen entering his place in Brooklyn, and a video showed them embracing one another after she got inside safely.

However, things appear to still be fairly casual between the two, as Emily was also recently spotted out with DJ Orazio Rispo, who she was rumored to be dating before Pete. The two were most recently seen together in New York City on Nov. 21. Meanwhile, Emily and Pete attended a Friendsgiving event together ahead of Thanksgiving, as well.

Emily is recently single after splitting from her husband, Sebastian Bear-McClard, who she shares a one-year-old son with. The two broke up in June and she filed for divorce in September. Pete is actually friends with Sebastian, who produced a previous movie that the actor starred in. Meanwhile, Pete ended his nine month relationship with Kim Kardashian in July.

“Kim has known Emily for some time and she approves of her dating Pete,” a source recently told HollywoodLife EXCLUSIVELY. “She thinks it’s cute and is happy that he found someone that is more his speed and on the same wavelength as him.”