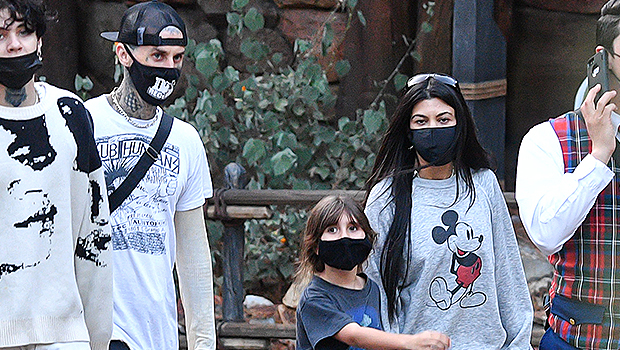 Penelope Disick looks so grown up in this cute new video that Travis Barker shared for her ninth birthday on July 8.

This video might just be the cutest thing we’ve ever seen. On July 8, Travis Barker took to his Instagram Story to share a heartfelt tribute to girlfriend Kourtney Kardashian‘s daughter, Penelope Disick, on the little girl’s ninth birthday.

In the clip, which you can see below, Penelope is playing with Travis’s drums, as Kourtney looks on. The Keeping Up With the Kardashians star appears to be in awe of her daughter’s talent, and we can’t say we blame her.

After watching the clip ourselves, we think it’s quite possible that Penelope may grow up to become a rockstar just like her potential future stepfather. But even if she doesn’t, she seems quite fond of Travis.

That was further proven in late May, when Travis and Kourtney took her three kids, whom she shares with ex Scott Disick, to Disneyland. Mason Disick, 10, Penelope, and Reign Disick, 5, were pictured having fun with Travis’ son Landon Barker, 17, and daughter, Alabama Barker, 15, as they bonded with Travis.

The blended family appeared to have a blast together as they hit up Splash Mountain, spun in the Tea Cups, zoomed around on the Big Thunder Mountain Railroad, and rode the King Arthur Carousel together in Fantasyland.

And in early April, Travis and Kourtney were spotted taking Penelope on a dinner date, which is super cute. Even though they’ve been super focused on each other since going public with their romance in February, they still find time to include their kids and make them feel special. And this new birthday tribute is no different.

We can’t wait to see how the rest of the Kardashians celebrate Penelope’s birthday. It’s a big day for her and she deserves all the love coming her way.

Qatar unlikely to establish ties with Israel unless Palestinian conflict is...