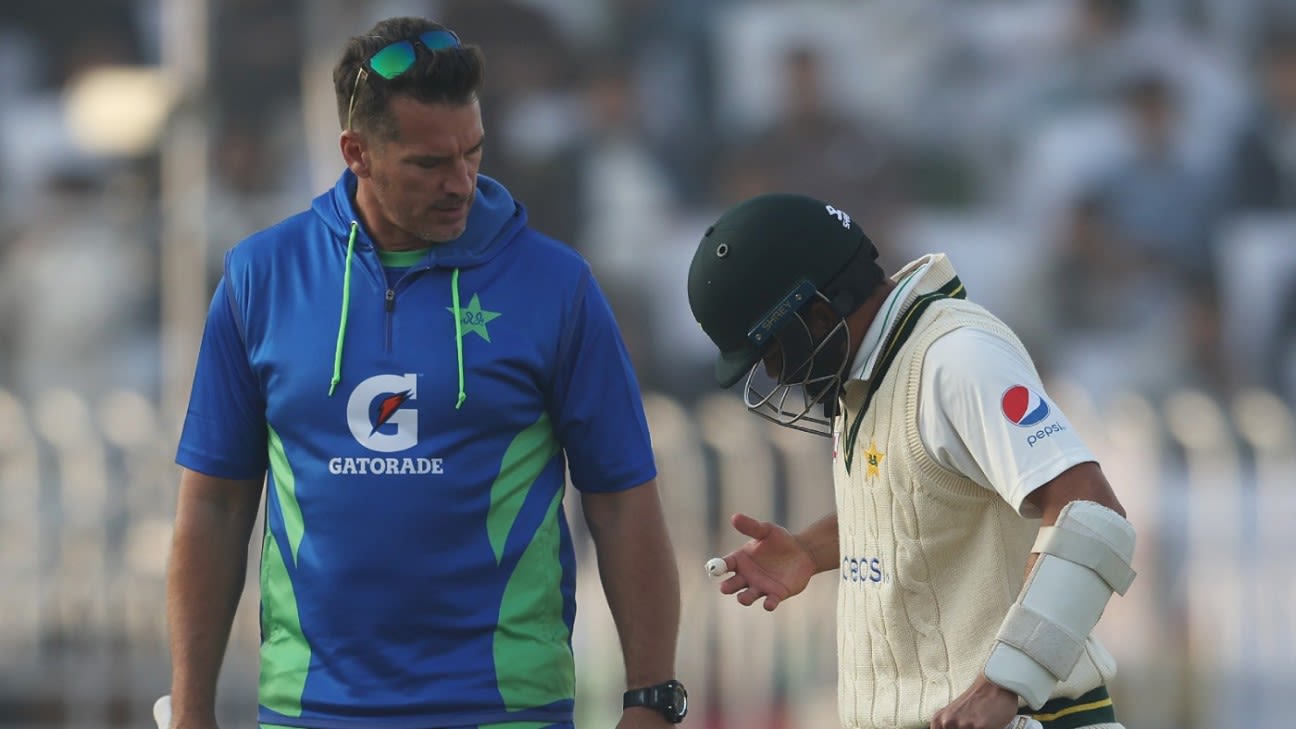 The PCB has appealed against the ICC’s decision to award a demerit point for the Rawalpindi pitch used for the first Test against England last month.

That surface was eventually declared “Below par” by match referee Andy Pycroft, the second successive Test pitch at that venue to have been given that assessment. At the time, Pycroft said: “It was a very flat pitch which gave almost no assistance to any type of bowler. That was the main reason why batters scored very fast and both sides posted huge totals. The pitch hardly deteriorated during the course of the match.”

That was the second demerit point for Rawalpindi in the year, after being given one for the Test against Australia in March. If a ground gets five points in five years, it can face a suspension from hosting international cricket for 12 months.
The appeal was one of the first actions of the new PCB administration, led by Najam Sethi, who replaced Ramiz Raja late last month. And it underlines the stark contrast of this new management with the assessment of Ramiz, who was PCB chairman at that time of the Test, of that surface. He told reporters then: “It is embarrassing for us, especially when you have a cricketer as chairman. This is not a good advert for cricket. We’re a better cricketing nation than this.”

Sethi took over as the head of an interim management committee now running the board on December 22, nine days after the ICC announced the sanction. On December 26, the PCB officially appealed the decision.

Ramiz and the ICC were not the only ones critical of the Rawalpindi wicket. Former England batters Nasser Hussain and Michael Atherton, on the broadcast commentary team, both criticised it and after the match, the Pakistan captain Babar Azam expressed his unhappiness with the pitch as well.

“Yes my input was there in the preparation of the pitch and we made it clear what we wanted but we didn’t get that because of the weather or whatever reason… we wanted a track with some turn for the spinners,” Babar had said.

The Test ultimately produced a thrilling result – and likely one of the greatest wins in England’s history – after the visitors scored a record-breaking 506 runs on the first day. Their 657 in the first innings came from 101 overs, and in reply, Pakistan made 579 runs from 155 overs. That there was a result was ultimately down to England scoring at 6.7 runs per over during the course of the Test and a widely-praised declaration from captain Ben Stokes that allowed Pakistan a sporting – given the nature of the pitch – tilt at the target. Jack Leach took the last wicket of a game in which yielded the third-highest aggregate of runs ever in a Test and the highest in over 80 years. Leach took the wicket minutes before the game was likely to end because of fading light.
The Rawalpindi Test against Australia provided no such spectacle, with nearly 1200 runs scored for the loss of only 14 wickets. Australia took only four wickets through the game and registered, collectively, the second-worst bowling performance of all time.
Their captain Pat Cummins was clear that the surface had been made to “nullify” their pace attack and knowledgeable enough to say the Test pitch was very different to that made for domestic first-class games at the venue – a charge that has often been made about the Rawalpindi Test pitch. Ramiz all but acknowledged Pakistan’s ploy at the time, given they were missing fast bowlers of their own.

Match referees make their assessments based on watching the match and the results, which can lead to subjective verdicts but it also makes the appeals process even trickier. With major international cricket now using Hawkeye data, it would be easier to base judgements on the information from each ball compared with previous Tests at that venue and beyond.

The exact basis of the PCB’s appeal is not clear though one official with knowledge of it said there were “multiple reasons, supported by data, videos, reports” and a “long list” of other reasons.