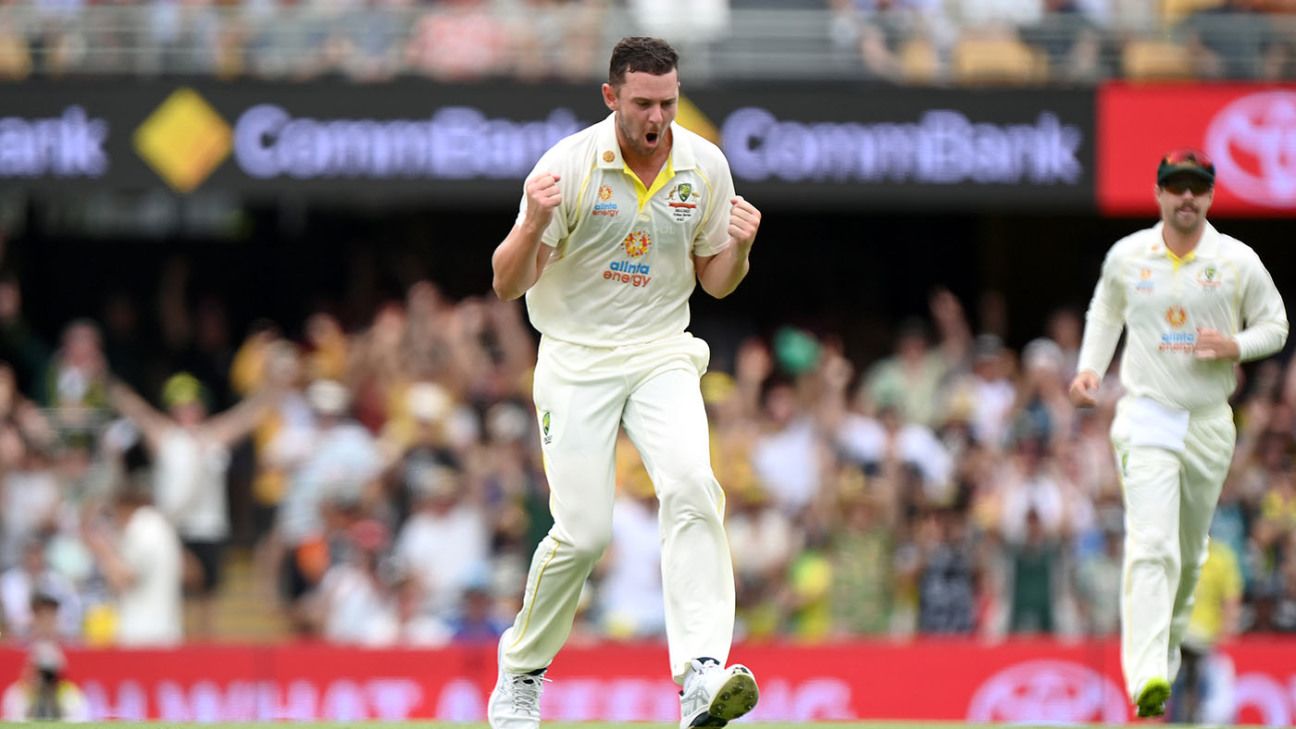 Pat Cummins took an early lead in the head-to-head with his opposite number, Joe Root – the No. 1 men’s Test bowler and batter in the world – on the opening day at the Gabba with Australia delighted they were able to follow the “blueprint” which has previously brought them success.

As soon as Root walked out, Cummins brought himself on – removing Mitchell Starc from the attack after he had taken a wicket with the first ball of the series – but never got the chance to bowl at the England captain as Josh Hazlewood found the edge with a perfect delivery that was full enough to draw Root forward.

Both sides pointed out that it was just one innings out of 10 Root might play this series, although Australia were able to acknowledge that from a position of much greater strength, but such is the weight that Root carries in this England order that it was one of the day’s significant moments.

“It’s only the first innings of a five-Test series but it’s a huge reason why we were able to knock them over for 147,” Cummins said. “Walk into lunch having them four down, that’s big, by the time the ball gets softer you are already into the batting line-up. One of a number of the batters who were big wickets, after his year and being captain it’s probably a little bit bigger but it’s only the first time he’s batted this series.”

Root has not scored an Ashes hundred since Trent Bridge in 2015 and his trip to Australia in 2017-18 was a story of unfulfilled promise as he passed fifty five times. Hazlewood now has Root eight times in 14 Tests and Cummins seven times in 11.

“Josh and Pat have almost brought that blueprint from the previous Ashes over in England where they seemed to have their plans down pat to Joe,” Mitchell Starc told Seven during the rain delay. “Fantastic to get off to the start we did and have him for nothing.

“Hopefully that continues throughout the series, but those two have carried that blueprint on from four or five Tests in England to now at the Gabba. To stay on top of the opposition captain is a big one and we’ve certainly started off in that fashion today.”

Although Cummins missed out on an early bowl at Root, he was able to claim the next-best thing when Ben Stokes edged to third slip shortly after the first drinks break. Stokes, playing a first-class innings for the first time since March, had lined the ball up well during his brief stay, got one boundary away through the covers and hit mid-off a couple of times before playing one from round the wicket he might have left on length.

“It’s nice when they don’t get a good look, face too many balls,” Cummins said. “They are a huge part of their batting line-up. Thought Joshy Hazlewood, that’s the blueprint to bowl to Joe Root, high quality relentless bowling and nice to get Stokes’ wicket. Everything went to plan today.”

Ollie Pope, who was part of England’s best partnership of the innings alongside Jos Buttler, was not reading too much into a lean opening day for Root in a year where he has 1455 runs.

“He’s on the back of an amazing summer, sometimes you play and miss, sometimes you nick them,” he said. “Wouldn’t say it dents the confidence of the team at all. Joe’s an amazing player and he’ll come back strong. We don’t look into that much, it’s nice when the captain gets runs but we have enough quality around him to score the bulk of the runs we need.”

One of the other big talking points of the day came from England’s selection. It was already known that James Anderson would sit out this Test, but Stuart Broad was also sidelined which meant for the first time since 2016 neither was in the line-up – and the first time in an Ashes Test since the MCG in 2006-07.

“Not sure if you asked anyone a couple of days ago if that was going to happen that anyone would believe you,” Starc said. “To take 300 Tests and over 1000 wickets out of their side is pretty interesting. Glad I don’t have to pick any side let alone that, or tap those two on the shoulder to say they aren’t playing but we certainly enjoyed conditions out there.”

It meant England’s attack had eight Tests of experience in Australia – four apiece from Stokes and Woakes – and they might have liked the first opportunity on the sporty Gabba pitch.

“I thought either one of those two would play in every game,” Cummins said. “Probably surprised but they have plenty of other bowlers to step in. It’s a big day for those bowlers on Thursday.”