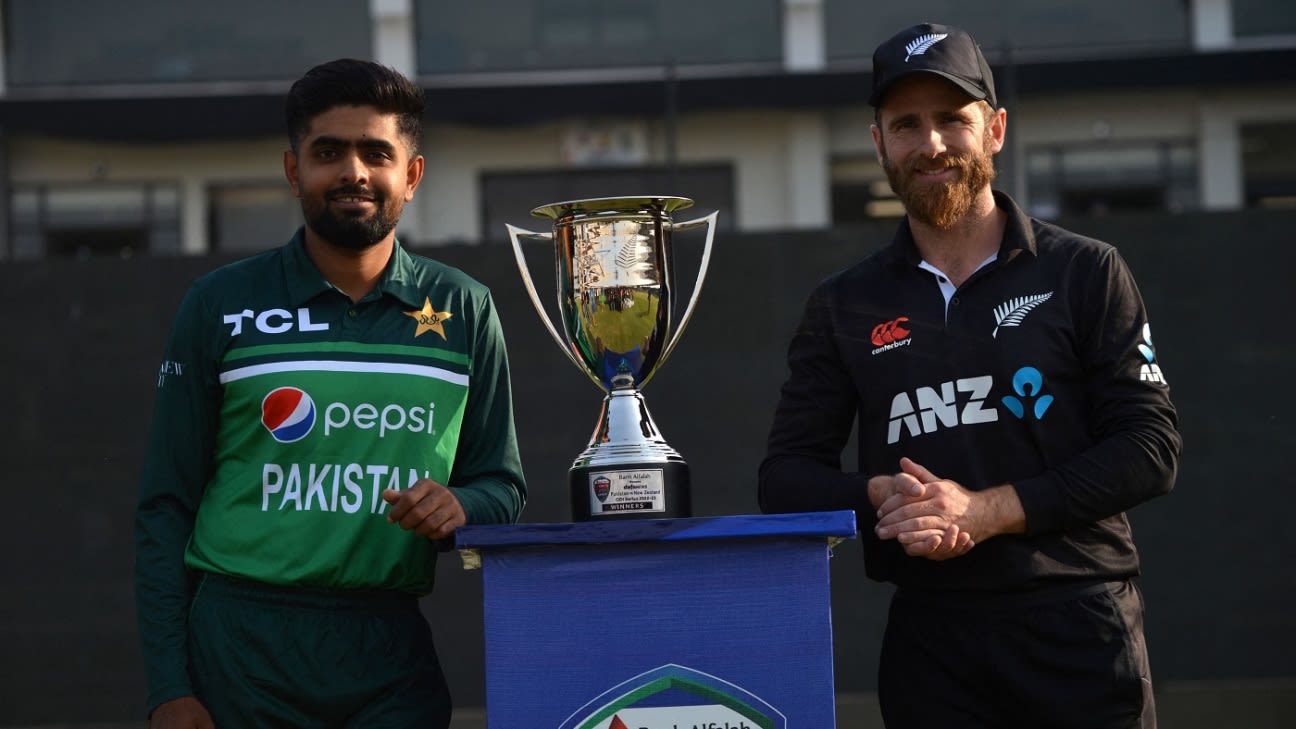 Very little seems to ride on the ODI series these days, something especially true for this three-match rubber between Pakistan and New Zealand. Both sides have qualified for the World Cup later this year, and hosting the limited-overs matches as the dessert rather than hors d’oeuvre makes it feel insubstantial.

That is especially true of Pakistan, who will end a difficult home season with these three games – one that has been dominated by red-ball woes. They last played ODI cricket in Rotterdam, of all places, a three-match series against Netherlands in August. It’s the format they have performed most consistently in over the last 12 months, winning eight out of nine matches, though a patchwork of games thrown in every few months makes it difficult to work out any sort of pattern. With this being a World Cup year, though, expect the format to take on greater relevance in the next nine months or so.
New Zealand’s ODI record is similarly impregnable, though their games too have been dotted about the calendar at odd intervals. Softer opposition in this period has doubtless helped that record, with nine of New Zealand’s ten wins coming against the Netherlands, Ireland, Scotland and the West Indies. A 3-0 reversal in a series against Australia provided a reality check, though they did bounce back with a win over India, and would have most likely made it two wins had rain not intervened.

They head to India for a white-ball series following this one, which means they can draw a touch more context out of this series than Pakistan. That is particularly true in a year where the World Cup will be held in India, so a dry run to the subcontinent in January might serve them rather well when October comes around.

In the spotlight: Haris Sohail and Henry Shipley

Haris Sohail last played an ODI in October 2020, and on the face of it, his recall wasn’t an obvious choice. Pakistan have won most of their ODIs over the past year, and Sohail doesn’t provide the firepower they require in the middle order towards the end of the innings. With Babar Azam and Imam-ul-Haq tending to take the game deep, Khushdil Shah and Mohammad Nawaz have fulfilled that role of late. A total of 129 runs in four matches in the recently concluded Pakistan Cup does not stand out as an obvious marker demanding a call-up. But Sohail does have international experience and pedigree, and if he can beef up a middle order that has at times looked porous in comparison to the top three, he might be able to bring in something Pakistan actually need in the ODI side.
Henry Shipley is tall, and can move the ball. That isn’t the start of a nursery rhyme as much as it is an open invitation to compare a New Zealand fast bowler to Kyle Jamieson. The Canterbury bowling allrounder has been called up to the white-ball squads for the ODIs in Pakistan and India. The nearly two-metre tall fast bowler will be relied upon to extract bounce from what are expected to be flat surfaces in Karachi, but don’t expect him to just be used as a middle-overs enforcer. He has at times taken the new ball for Canterbury, and managed to get swing and seam. Even if there’s likely going to be less of that in the south of Pakistan than on the South Island of New Zealand, he brings something to the visitors’ that Pakistan are unlikely to be familiar with.

A fresh pitch is expected for the first ODI. It’s expected to be comfortable and sunny, a high of 19 degrees Celsius. No rain is expected.

Pakistan have a new vice-captain in Shan Masood, which likely brings him into the XI as a middle-order batter. Haris, too, is expected to feature in the team.

Doug Bracewell has been named as Matt Henry replacement for the ODIs in Pakistan and India, but he won’t be available for Monday’s game. New Zealand head coach Gary Stead confirmed that Bracewell would arrive in Karachi on Wednesday.

“It’s the first series of the year and we want to start well. New Zealand is one of the best sides in the world and have a good mix of senior and junior players. These matches will be good.”
Pakistan captain Babar Azam is expecting a hard-fought series

“We’ll have to assess the conditions in front of us. It’s the first time playing ODI cricket here for all of us. It’s a tough challenge against a very strong Pakistan side.”
Kane Williamson acknowledges the novelty of this challenge for a side playing in unfamiliar conditions