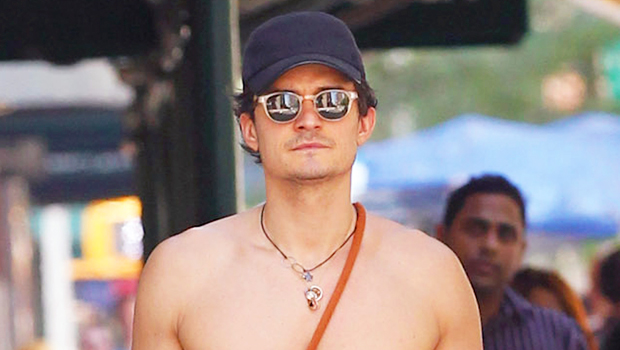 Orlando Bloom showed off his new chest tattoos from a film set. The actor, 45, took to Instagram on Thursday, May 12 and shared a mirror selfie of himself shirtless proudly sporting abs and some new ink on his chest. The tattoos, which seem to be for his new movie, Red Right Hand, include two eagles that are inked on his pec muscles. The Lord of the Rings star also donned a mustache and beard as he smiled while capturing makeup artist Brittany White getting him ready for filming.

Orlando shared more photos in the post from his time in New Castle, Kentucky, which is where the upcoming thriller film is currently in production. In one image, Orlando showed off a small tattoo under his ear that’s written in black ink and says “you, family, survival.” He wore a blue and gray cap and a white T-shirt in that photo.

The British actor also posed with an adorable small dog on a bench outside Buddy’s Place diner. He finished out his post by capturing a sunset in the town and an owl in a tree during nighttime, as he whistled at the bird before it flew away. “some set bits n bobs #bts & n 🦉,” Orlando wrote in his caption.

Orlando is working on his new movie that also stars Andie MacDowell, Scott Haze, Garrett Dillahunt, Mo McRae, and Brian Geraghty. He’ll be away from his fiancee Katy Perry and their 1-year-old daughter Daisy Dove, as well his son Flynn, 11, who he shares with ex-wife Miranda Kerr. Orlando and Katy, 37, have been engaged since February 2019 but their wedding plans have been thwarted due to the COVID-19 pandemic.

Although their wedding plans haven’t gone through as intended, Katy and Orlando are still living such a happy life together with their baby girl.