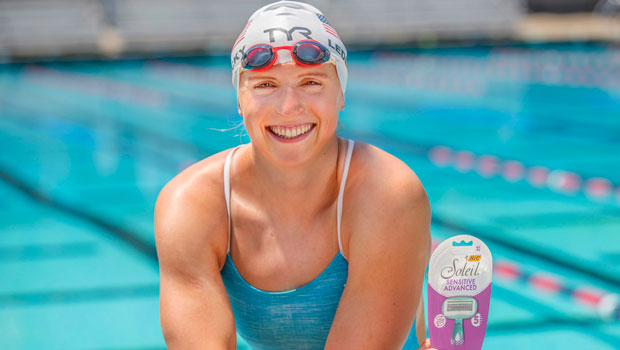 Katie Ledecky speaks to HollywoodLife about the upcoming 2021 Tokyo Olympics, her partnership with grooming brand BIC, and more!

Katie Ledecky‘s relaxation rituals probably aren’t that different from yours. The Olympic swimmer, 24, and face of grooming brand BIC Soleil Sensitive Advanced “Game On” campaign spoke exclusively to HollywoodLife about the campaign and upcoming 2021 Tokyo Olympics, revealing that her non-Olympic relaxation moments stem from TV and pizza.

“I have gone through a lot of TV shows like everyone else in the past year and some of my favorites are Blue Bloods and Curb Your Enthusiasm,” the five-time Olympic gold medalist said. “Those are recurring and still coming out with seasons which is fun.” When asked about her favorite cheat meal, she cited a big ol’ pizza.

“I haven’t had a big pizza in a pretty long time; that is something I had after my last race in Rio, so I am sure that will be one of my go to meals after Tokyo.”

Katie, full name Kathleen Ledecky, made her Olympic debut at the 2012 London Olympics at the age of 15, competing as the youngest athlete in the U.S. Olympic delegation. To state that the swimmer made a splash would be an understatement, as she won four gold medals during her Olympic debut and broke a world record during the women’s 800-meter freestyle.

Along with the five Olympic gold medals, Katie also holds 15 World Championship medals, making her the most-decorated female swimmer in history. In sum, she is a pretty big deal — so no, retirement is not on the horizon just yet. “I don’t have a retirement plan,” Katie told HL. “I know that I’m going to continue swimming beyond this summer.”

“Going to the next Olympic cycle 2024 I know will be my next big goal,” Katie continued. “And then I know that after 2024, I’ll have to evaluate where I’m at in life — where I’m at with my swimming career, where I’m at with all my other interests and make a decision on whether I’ll go through 2028.”

She added: “I am very tempted by the idea of the 2028 Olympics being in Los Angeles.” With the upcoming Olympics initially delayed due to COVID-19, the swimmer revealed how she trained, explaining that she prepped in a neighbor’s 25-yard pool during the first three months of the pandemic.

“After about three months, our normal training facilities opened back up at Stanford.” she said. “We’ve been following a lot of protocols and doing everything we can keep each other healthy, but we’ve still been able to push each other, and make sure that we’re really working towards being at our best to this summer.”

On top of eating and sleeping well, Katie said her training routine is also dependent on getting that smooth shave. Enter: her partnership with BIC. “Shaving is a big part of any swimmers routine when it comes to the big meets,” Katie said. “I’ll be bringing my Bic Soleil Sensitive Advanced Razors with me to the big meets… Our partnership is about inspiring confidence in everyone, and really trying to make an impact.”