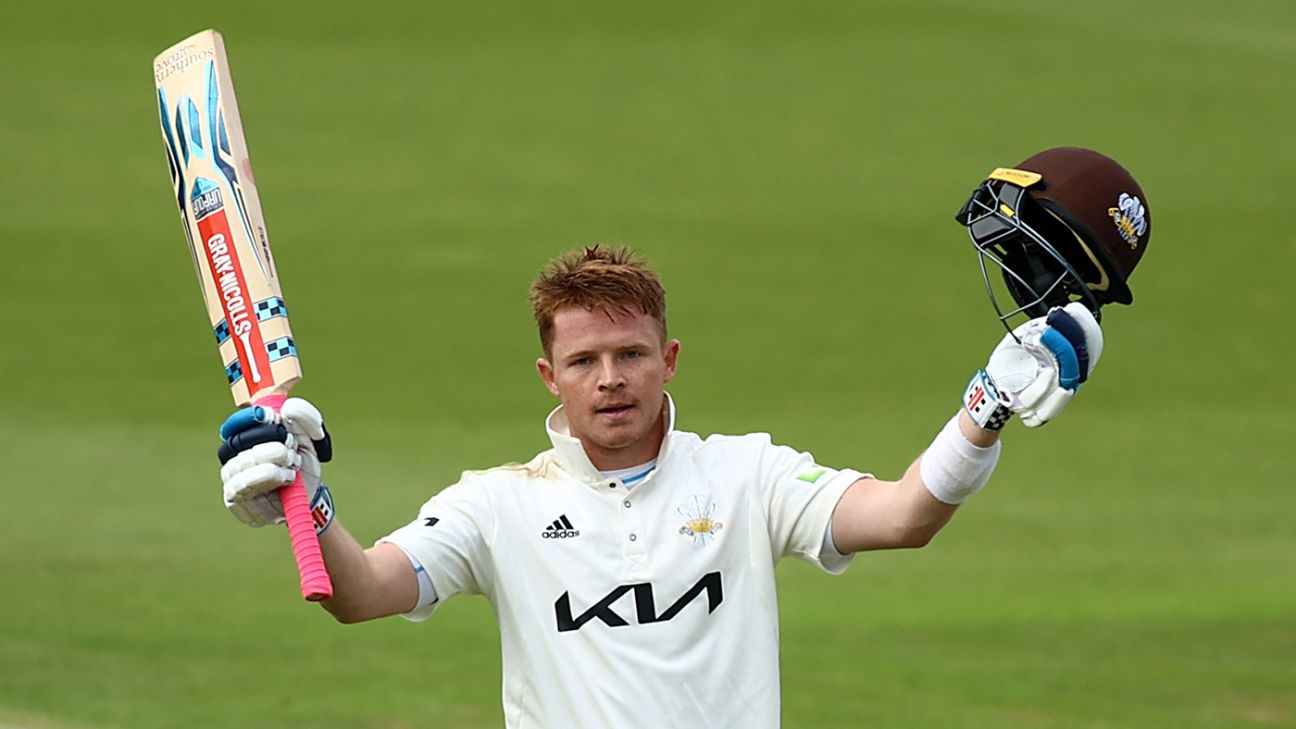 To celebrate the 90th birthday of Surrey legend Micky Stewart, the Kia Oval changed its name to The Micky Stewart Oval for this penultimate fixture of the County Championship season against Yorkshire. On Day one, however, Ollie Pope reminded everyone that this was his house.

For the time being at least. Just as cricketers pass through the game, so it is they merely occupy the places they call “home” during their careers. But a blissful 136 from 131 deliveries, a 10th first class century at this famous ground (15th overall) has put Surrey that little bit closer to adding Championship title number 21 to the mantlepiece, as they ended Tuesday on 292 for 6 while 85 miles away second-place Hampshire had already been skittled for 57 by Kent. The challengers were 108 behind after the first innings of the match meaning they can only take 19 points from this round. Surrey, meanwhile, still have the full 24 up for grabs.

They say the worst thing you can do when you’re leading is to look over your shoulder. But few begrudge those that do. And though Surrey came in with an eight-point cushion , it was only natural to cast a few glances towards the Ageas Bowl. However, when Pope is in this kind of mood, all eyes are on him. This was as typically him as you could get: on the front foot from ball one when he advanced down to Steven Patterson, late cuts on tap, and impish invention to get him from 90 to 100 with a ramp off Jordan Thompson for six, then a reverse sweep off Dom Bess’ first delivery for four.

Among the 18 boundaries was a palpable Big England Player energy from one who has grown into an international role as a No. 3, even if he knew he’d be returning here at No. 4 given Hashim Amla has a far greater claim at first drop. He didn’t mind all that much.

A first summer under Ben Stokes and Brendon McCullum has seen Pope assume greater responsibility, and with that was a clear desire not to shirk duty as a returning England Test cricketer, especially after notching a first home century this summer. He was one of three for Surrey, alongside Ben Foakes and summer debutant Jamie Overton, who was back after recovering from a foot injury sustained on July 27 against Warwickshire. Yorkshire, by contrast, had no real belief they would be able to call upon Joe Root for the run-in.

It certainly wasn’t all Pope, and the part of Jordan Clark (55 not out) is certainly not over. The 142 for the sixth wicket was six more than the five stands before it, and Clark, along with Overton (9*) are the last two Surrey could reasonably expect to pick up at least two of the three remaining batting bonus points.

The situation at lunch was far more even, both here and further down south. At the time, Surrey were 82 for 3, bruising a little from the departure of opener Ryan Patel, whose dismissal brought about the end of the opening session. Meanwhile, a confusingly under-strength Kent batting card was 35 for 5, reaffirming to the division leaders that they were best served focusing on what was within their control.

Patel’s 41 was diligent, impressively unperturbed by the loss of his captain Rory Burns for a 13-ball duck and then Amla (14) around half an hour before the interval. Like those two, a twitch outside off stump brought about a catch in the cordon. For Yorkshire and Ben Coad, who had his second, it tilted the balance back to equal after Jonny Tattersall had won the toss and chosen to bat first.

Perhaps the only time the dial shifted unquestionably in their favour came with Patterson’s two dismissals in three deliveries. The first the more important with the returning Foakes snared low by Tattersal after skewing an edge between bat and pad. The second was still of note given Cameron Steel’s diligent 48 in the first innings of last week’s draw at Wantage Road, but an unnecessary fish outside off stump gave Tom Kohler-Cadmore a third catch at first slip.

At 136 for 5, there was a distinct possibility of things going badly awry. But Pope and Clark’s stand was the kind that both sped up the game and reasserted a season’s worth of dominance. Three figures between them came up in just 20.1 overs, at which point they seemed to make a conscious effort to pick up the remaining batting bonus points on their own.

Both uppercut Yorkshire debutant Ben Mike over the cordon for sixes, thus prolonging what has been a long and expensive wait for a Championship wicket. The 24-year-old’s last – Nottinghamshire’s Liam Patterson-White on June 14 for former club Leicestershire – has subsequently been followed by 336 runs in 50.2 overs.

At the other end of the control spectrum was Patterson, who managed to finally get Pope over-balancing onto the off side to take out his leg stump, moving him to 487 career dismissals. The gasps around the ground said it all, as did the congratulatory pats from Yorkshire fielders.

An innings that did not look like ending did just that, its worth underlined by the fact the other six of the seven batters so far had only managed 142 of the 278 between them. And perhaps there is a sense of regret in the home dressing room that 350 could have been ticked off before day two if Pope had remained. Nevertheless, Clark continued, improving the percentage of “the rest”, moving to a 18th score above fifty before bad light at 4:46pm eventually became stumps.

By the time the umpires Alex Wharf and Russell Warren came out for a cursory look 25 minutes later, Hampshire’s score of 39 for 4, having dismissed Kent for 165, was greeted by a smattering of cheers. An addendum at the end of this announcement brought news of Hampshire losing a fifth. The microphone was back in action on to alert those still remaining of wickets six, seven, eight, nine and 10 before confirmation play was officially abandoned. Even with their players in the changing room, Surrey were marching on to glory.