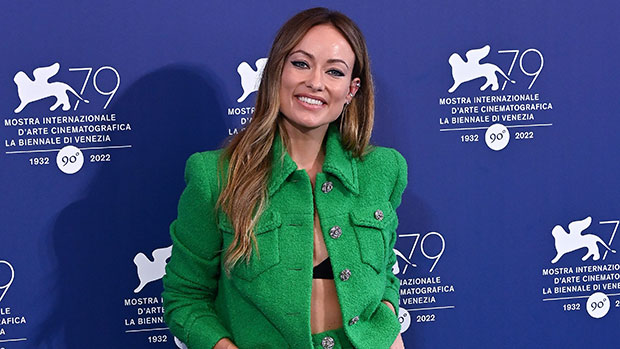 Olivia Wilde, 38, was a gorgeous sight to see while promoting her new film Don’t Worry Darling! The director and actress stepped out on the red carpet of the Venice Film Festival to pose at a press conference for the flick, and wore a black bikini top under a green tweed blazer and a matching long skirt with black boots. She had her long wavy hair down and showed off epic makeup that included dark eyeliner that brought out her bright blue eyes.

In addition to Olivia, some of the movie’s stars attended the press conference. Harry Styles, who has a main role in the film, wore a white tank top under an ivory blazer with black stripes, a loose blue and white scarf around his neck, and black pants. Gemma Chan wore a gray ruffled crop tank top and metallic gold flared out pants, while Chris Pine wore an ivory button-down top under a black blazer and red pants.

Shortly after the press conference, the cast headed out to the official premiere in other epic outfits. Olivia donned a ruffled yellow down that was reminiscent of a flamenco dancer style, and Harry wore a suit reminiscent of the style of the 1970s. Florence Pugh, who plays a main role in the film, was also in attendance, and wore a black off-the-shoulder dress with silver sparkles and sheer material. Gemma went with a flattering metallic silver dress with floral prints and Chris wore a brown blazer over a white top, a brown bow tie, and white pants.

Before the Venice events, Olivia and Florence had been facing online rumors of a feud between them after Shia LeBeouf, who was originally supposed to play the part Harry took over in the film, made headlines for disputing an insinuation Olivia made in an interview. After seemingly hinting she fired him, Shia publicly stated he quit the film due to not getting enough rehearsal time, and even released a video Olivia allegedly sent to him asking him to come back to the production as she talked about unresolved tension between him and Florence, whom she referred to as “Miss Flo.” After a journalist asked if there was a “falling out” between her and Florence, who wasn’t at the press conference, Olivia praised the actress.

“Florence is a force, and we are so grateful that she’s able to make it tonight despite being in production on Dune. I know, as a director, how disruptive it is to lose an actor even for a day, so I’m very grateful to her, to Denis Villeneuve for helping us,” she said. “And we’re really thrilled we’ll get to celebrate her work tonight. I can’t say enough how honored I am to have her as our lead. She’s amazing in the film.”

“As for all the endless tabloid gossip and all the noise out there, I mean, the internet feeds itself,” she continued. “I don’t feel the need to contribute. It’s sufficiently well nourished.”