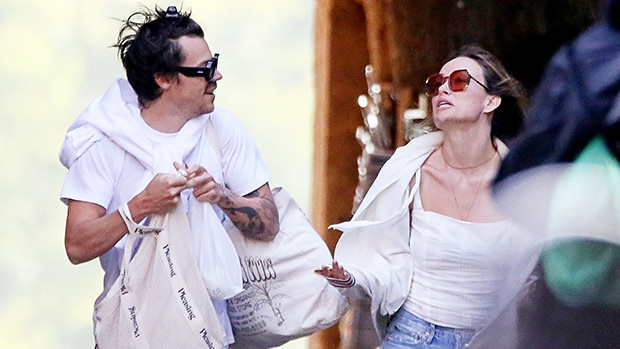 Olivia Wilde and Harry Styles are definitely going from strength to strength! The two lovebirds took their red-hot romance international, once again, as they were spotted enjoying an Italian getaway on Thursday, May 12. The Book Smart director, 38, looked deep in conversation while walking alongside her beau, as the “Watermelon Sugar” hitmaker, 28, couldn’t take his eyes off her! How sweet!

Rocking a set of daisy dukes, a white tank top and baggy oxford, Olivia looked every inch the movie star relaxing on a holiday. She kept her trademark brunette tresses long and loose, as she opted for minimal makeup, allowing her natural beauty to shine. Harry, meanwhile, sported a striped pair of shorts, while he showed off his fit physique in a white tee. The adorable couple was twinning in white sneakers and sunglasses, making the pair ultimate relationship goals.

The Italian getaway is the first sighting of the couple together since Olivia was served custody papers from her ex-fiancé Jason Sudeikis in the middle of a ComicCon presentation in April. A source confirmed to HollywoodLife that the contents of the envelope were documents pertaining to Olivia and Jason’s kids Otis, 8, and Daisy, 5, and also revealed that Jason allegedly was unaware where his former fiancée would be served.

Despite the legal drama, Olivia and Harry looked like they didn’t have a care in the world while vacationing in Italy, which comes as no surprise as they clearly love travelling there, with a similar trip taken last year in July. While hanging out on a yacht and snorkeling off the Island of Giglio near Tuscany during the trip, the couple couldn’t keep their hands off each other, packing on the PDA whenever they had the chance.

The pair have been getting more and more involved after meeting on the set of the upcoming film Don’t Worry Darling, which Harry starred in, and Olivia directed. They first sparked romance rumors after they were seen holding hands while attending a wedding together in Jan. 2021. Since then, the actress and former One Direction bandmate have enjoyed a slew of romantic outings together. Olivia has even been spotted attending Harry’s concerts!

Harry Styles’ Grammy Wins: How Many He’s Won & For What