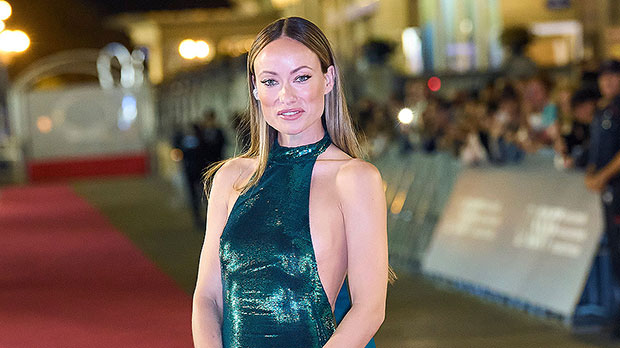 Olivia Wilde, 38, proved she knows how to fix a shoe malfunction in a quick manner during her latest public appearance! The actress showed up to the San Sebastian Film Festival in Spain to promote her new film Don’t Worry Darling in a green halter-style sequined gown and it got caught in her matching Gianvito Rossi Metallic green leather pumps at one point, causing her to almost tumble, when she posed on the red carpet. She immediately fixed the mishap when an assistant helped her take off one shoe to untangle the dress before she put it back on and went on to confidently pose for photographers with a smile.

The beauty had her long hair down and parted in the middle with her look and wore natural-looking face makeup. She also rocked one earring and added her signature black eye makeup, which gave her just the right amount of glamour. Her memorable red carpet moment was captured by fans waiting on the sidelines to catch a glimpse of the talented movie star.

Olivia’s latest appearance comes after she made headlines in a casual outfit during an outing in Los Angeles, CA last week. She showed off a white tee, a pair of Daisy Dukes, and cowboy boots that brought out a cool cowgirl style. She also wore a black baseball cap and aviator style sunglasses as her long hair, which appeared to be wet, was down.

Olivia’s professional and casual outings have been in full force as she stays busy with promotion for Don’t Worry Darling, which she directed and stars in. She has attended various events over the past several weeks, including the Venice Film Festival, and although her beau Harry Styles, who is also in the movie, was also there, they didn’t interact or pose alone together on the red carpet. A source told us they chose not to spend moments alone on the carpet because they didn’t want the focus to be on their relationship.

“They intentionally decided to keep the focus off their relationship by not walking the carpet together because they don’t want to distract any more from the movie,” the insider EXCLUSIVELY told HollywoodLife. All is well though. “[They are] very much a united front; look at what they chose to wear. It’s no accident that they’re both in Gucci,” the source added.