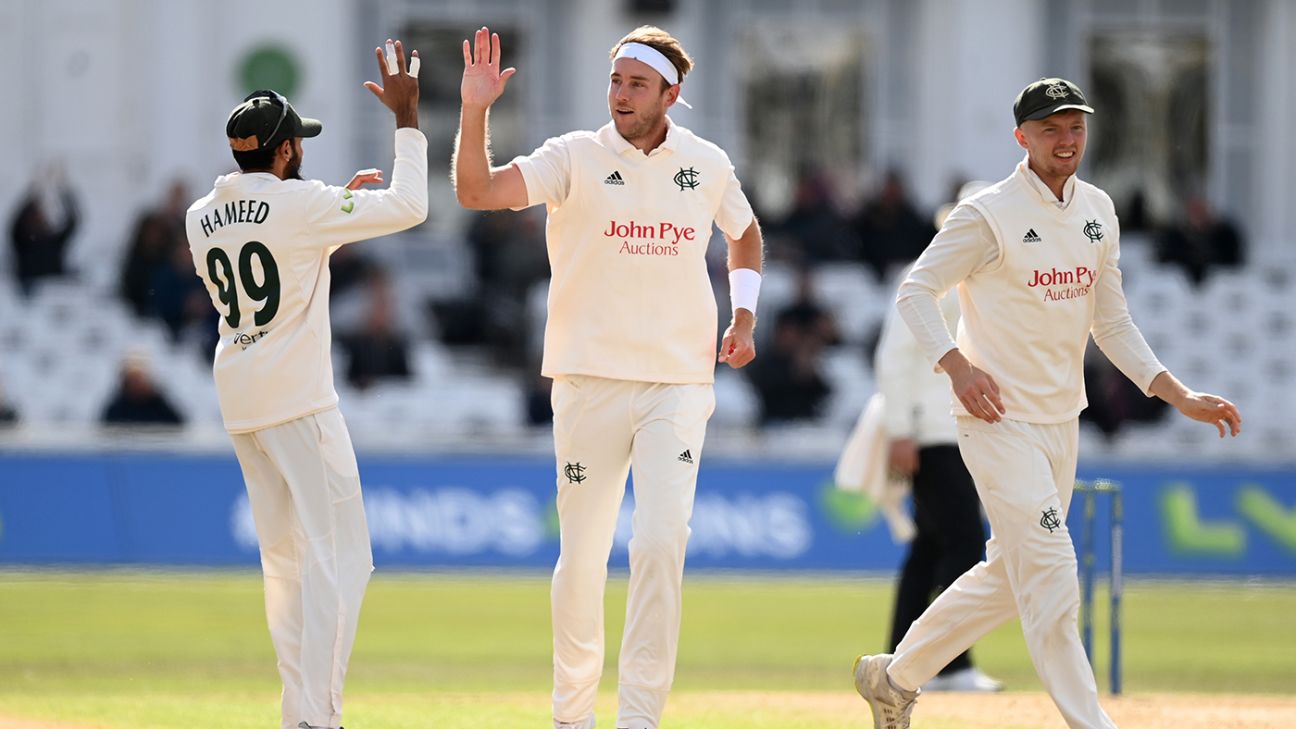 Nottinghamshire secured promotion to Division One of the LV= Insurance County Championship and are effectively Division Two champions already, although their supporters will have to wait until the final day of the season to see it mathematically confirmed.

They bowled Durham out for 207 just 10 overs after lunch in reply to their mammoth 662 for 5 declared. Yet they eschewed the chance to win the title with a flourish – and perhaps a day to spare – by not enforcing the follow-on, to the bemusement of some spectators.

In the event, after bad light kept the players off for the best part of an hour, Nottinghamshire declared their second innings on 121 for 2, with Haseeb Hameed 49 not out, and Joe Clarke on 48.

It left Durham, now 576 behind, with 14 overs to face when they re-emerged, of which eight were possible before the light closed in again.They finished 14 for 2, having lost lost Sean Dickson, caught at third slip fending at Stuart Broad for a duck, and nightwatcher George Drissell leg before to Luke Fletcher for six.

The reasoning behind Nottinghamshire’s decision to bat a second time was the subject of much speculation.

What was known is that it had been supposed that only a win in this match would ensure Nottinghamshire finished ahead of nearest pursuers Middlesex to be champions, but the seven bonus points they took from the first innings changed the equation, meaning a draw would be enough.

As well as guaranteeing that Nottinghamshire finished in the top two, those points meant that provided they did not lose this match, they would be champions even if Middlesex took maximum points from their match at Worcester.

That outcome would leave both sides level on points, wins and defeats in the Division Two table, but with Nottinghamshire ahead on the head-to-head – the third tie-breaker in the competition rules. Both matches between the sides this season ended in draws, but Nottinghamshire gained more bonus points.

With a lead of 455 and Durham a key batter short after David Bedingham dislocated a shoulder in the field, Nottinghamshire were odds-on to win by an innings and quite possibly before the end of the day.

That cannot now happen, although at least spectators will be able to witness the last-day denouement at no cost, the club having announced that tickets for Thursday would be free.

Earlier, two down for 53 and still 609 behind overnight on first innings, Durham were in dire straits at 155 for 6 at lunch.

Scott Borthwick, who struck three positive early boundaries despite protecting a broken finger, cut Fletcher straight into the hands of backward point. Drissell looked capable of hanging around but then gave a tame catch to midwicket.

Nic Maddinson went on the attack, smiting three sixes off Liam Patterson-White’s left arm spin. Yet his violent innings ended with a tentative push at a ball from Broad, giving first slip a regulation catch. New batsman Chris Benjamin was snapped up at short leg in the next over, giving Patterson-White his second wicket.

It left Durham in a sorry state, which worsened immediately after lunch when Ben Raine was leg before to Dane Paterson. Jonathan Bushnell batted nicely for his 37 in only his fourth first-class match before he nudged the spinner to slip.

Matthew Potts decided on the Maddinson approach and Patterson-White conceded two more sixes, but after two boundaries in a row off Paterson matched Maddinson’s 40, Potts holed out to deep wicket, ending the Durham innings and giving Nottinghamshire a third batting point, securing promotion. Paterson finished with 3 for 50, Patterson-White 3 for 72.

After Nottinghamshire’s decision to bat again, Potts picked up his 58th wicket of the season as Ben Slater edged to first slip, before Matt Montgomery fell for nine following his first-innings 178, giving a similarly straightforward catch to second slip.

Bad light – the bane of late September cricket – descended at 4.35pm, which meant Nottinghamshire probably would not have had time to bowl Durham out again in any event. The loss of overs prompted the Nottinghamshire declaration, which among other things denied Clarke his last opportunity to score that elusive first hundred of the season.