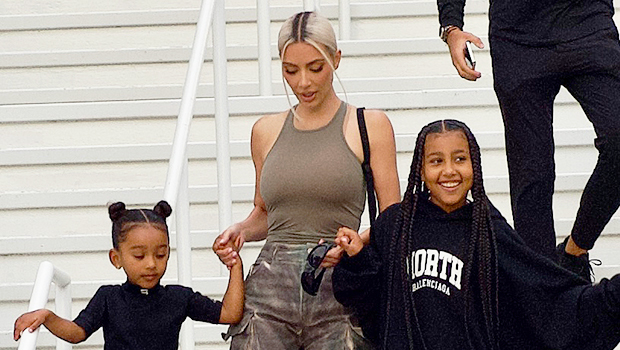 Sisterly bonding! North and Chicago West sweetly gave each other a hand while styling one another’s edges in a sweet TikTok video that North, 9, posted on her shared account with her mom, Kim Kardashian. The girls seemed like they were having a good time helping each other with their hair, and they both complimented one another’s skills!

The cute clip showed the two speaking to the camera before giving close-up looks into their styling for one another. At the start of the clip, North asked her younger sister, 5, what was their plan for the day, and Chicago responded. “What are we doing today?” North said. Both girls similarly sported braids with purple and pink colors in them. North sported a charcoal Aaliyah t-shirt, while her younger sister wore a white onesie.

Chicago seemed very excited, as she responded, “I’m going to do your edges!” North mimicked her sister for a cute moment. “And I’m going to do your edges!” she said. The clip then alternated between the two styling one another’s hair. Chicago did North’s first, and the older West sister was a super supportive older sibling, saying that she really liked the way it was turning out. She then did her sister’s hair, and Chicago said that she “loved it!”

At the end of the video, both girls adorably showed off the results and North told her sister to “Say bye to your channel,” and the two giggled and waved.

North often features her sister in her sweet TikTok videos, and she’s shown that she loves teaching Chicago new skills, like when the two girls made milkshakes with their younger brother Psalm, 3, earlier in January. Back in December, North also dressed up Chicago in her clothes to transform her younger sister into her for an adorable trend. While she often helps and shares with her sister, North has occasionally pranked her younger sister for some funny clips, like when she used a filter to distort her face to her younger sister’s surprise!