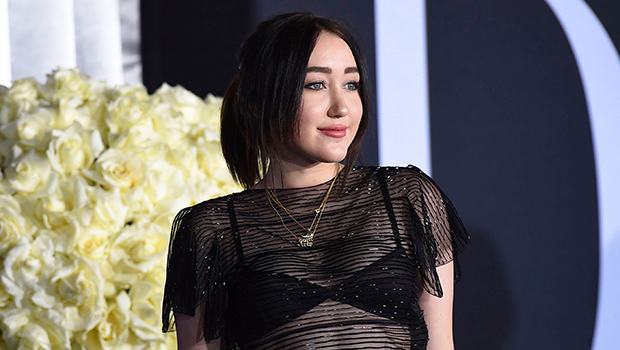 Noah Cyrus left very little to the imagination at Paris Fashion Week 2023. The 23-year-old singer took to Instagram on Monday, Jan. 23 to show off her very sexy and nearly see-through baby blue Arturo Obegero dress she wore for the Spanish label’s fashion show today, as seen here. The simple, yet whimsical dress began with a wrap feature around her neck and elegantly draped over her curves to the ground. The second photo in Noah’s carousel offered a closer look at the dress — and a glimpse of her bare chest — as she stared out the window with a dreamy view of the Eiffel Tower in the background.

Noah paired pointed-toe boots with the dress and added some sparkle with dangling crystal earrings. She showed that the bleached eyebrow trend is still in and rocked it with her natural makeup look. Her long, brown locks were straightened and flowed gracefully down her sides, mimicking the gorgeous dress.

Just one day earlier, the younger sister of Miley Cyrus showed off a similar look at the Ludovic de Saint Sernin runway show. As seen above, she wore a coffee brown dress that was also translucent and offered the slightest view of her dark string underwear underneath. The dress hugged her beautiful figure — tighter than the blue dress — and also flowed to the ground. She wore it with super tall black heels and a fur coat.

Like her sister, Noah has never been scared to show some skin and often wears sheer ensembles. She even rang in her 23rd birthday on Jan. 8 with a photo of herself flashing the camera (she covered up her chest with a star to keep things appropriate). You can see her birthday images here.

Noah isn’t just comfortable getting nearly naked in the fashion world — she has gotten very raw and vulnerable with her fans as of late. In May 2022, she released a single from her debut album, The Hardest Part, called “Mr. Percocet”, which talks about her former dependence on pain medication. “in 2018 i was introduced to using prescription pills (downers like xanax and percocet) as a way to socialize and party and fit in with the people i was surrounding myself with. as time went by it became a crutch for my anxiety and depression and i became completely addicted to the pills i was taking and lost any hope i had left to live,” she wrote in the caption of an Instagram post promoting the song’s music video.

“i’m happy to say i’ve made a lot of progress and put in a lot of work to be here making music and living my life happily for the first time in what seems like forever,” she continued. “it has now been over a year since i ditched the prescription downers at the end of Dec 2020. as i look back now i see how worrisome my behavior was, especially throughout quarantine. i was putting myself out there publicly in a way that was completely filtered through the haze of substance abuse. i guess telling everyone this is a way to provide some context for what’s been going on and to thank you for sticking by me. hopefully the music off of this album and my honesty can provide some solace to people going through similar stuff.”

When the album dropped in Sept. 2022, Noah thanked her fans for their support and revealed that making the album “saved” her.