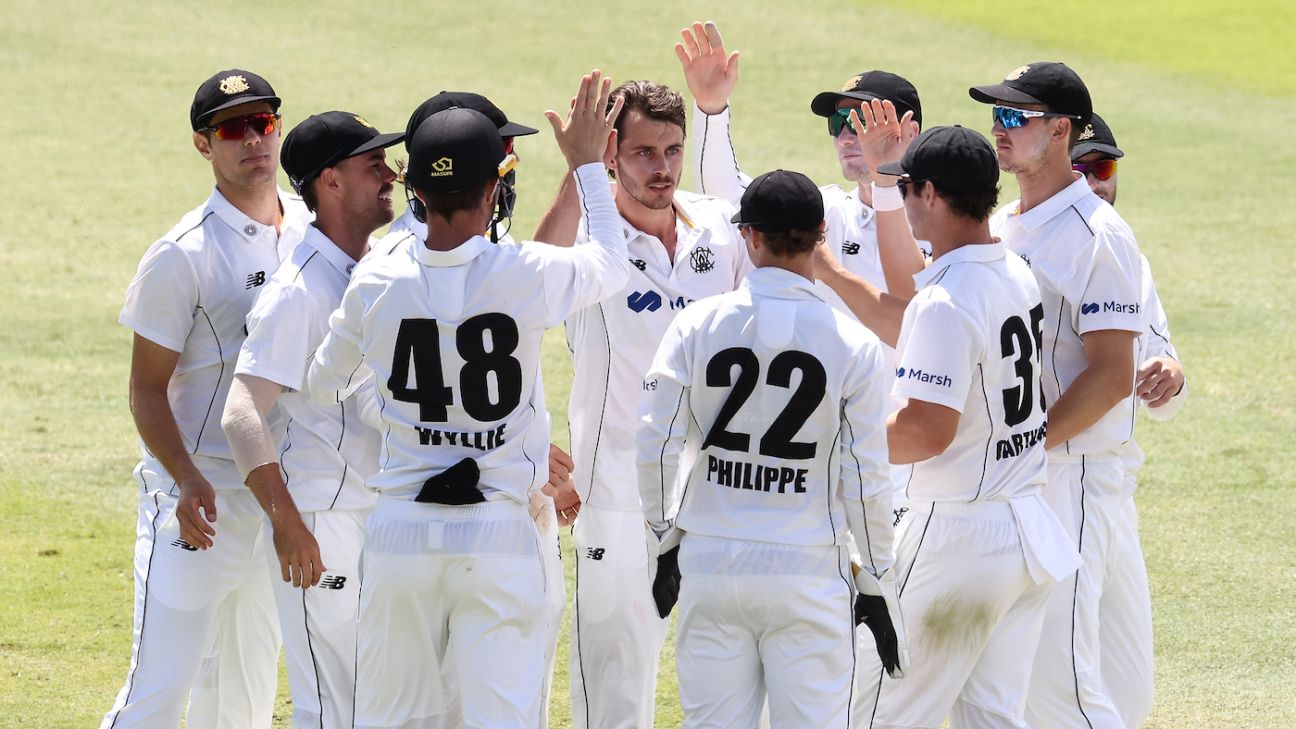 Lance Morris‘ eye-catching start to the Sheffield Shield season continued as defending champions Western Australia stormed to a commanding eight-wicket victory over New South Wales at the WACA in Perth on Wednesday.

Morris, the 24-year-old quick, backed up his career best 5 for 36 in the first innings with 4 for 46 in the second to lead a well-balanced attack, which maintained a stranglehold over NSW, who were dismissed for only 180 and 162 in a match lasting just three days.

Consistently hitting speeds around 145kph, occasionally peaking above 150kph, Player-of-the-Match Morris lived up to his growing reputation as arguably the fastest bowler in the country. His accurate line-and-length bowling was a standout, but he had plenty of support with fellow quicks Joel Paris and Matt Kelly also among the wickets, and so too emerging allrounder Aaron Hardie and offspinner Corey Rocchiccioli.
After they had played their part, WA needed just 85 runs for victory, and cruised to the target in the 25th over in the perfect start to their Shield defence, having memorably ended a 23-year drought last season. WA’s first innings of 258 was dominated by 18-year-old Teague Wyllie, who became the youngest player to score a Shield century since Ricky Ponting.
“Our bowlers deserve credit and we never let them build partnerships,” WA captain Sam Whiteman said. “He (Morris) has worked hard on bowling a good length. It was a reward for him for him for the way he contained and built pressure.”
NSW, however, were unable to put up much of a fight with only two batters compiling half-centuries in the match – one being 22-year-old wicketkeeper Baxter Holt, who made an attractive 54 in a lone hand in the second innings.

While a smattering of grass was evident, the pitch was not a minefield and seemingly played better on Wednesday than the previous two days as NSW capitulated amid a slew of rash strokes.

“I thought the wicket rewarded the batters who put time in and stayed patient,” NSW captain Kurtis Patterson said. “For whatever reason, we got pulled away from being patient at different parts of the game. We need to be much better at that.”

Trailing by 78 runs after the first innings, NSW’s task of clawing back into the contest was made more difficult when star batter Jason Sangha was subbed out of the match with concussion suffered during training before the day’s play.

Their prospects of setting WA a challenging target improved when openers Dan Hughes and Blake Nikitaras defied sharp new-ball spells to build a 48-run partnership amid sunny but cool conditions.

Morris worked up a head of steam and conjured vicious pace forcing a rushed Nikitaras into several unconvincing hooked shots. But 22-year-old Nikitaras’ luck ended late in the first session when he was adjudged caught behind off a terrific seaming delivery from Hardie although the batter trudged off disappointed with the decision.

His wicket triggered a collapse, with Hughes falling in the next over to a brute of a delivery from Morris, and then shortly afterwards, Patterson was caught behind as NSW slumped to 57 for 3.

NSW’s downfall was complete on the stroke of lunch when Moises Henriques fell loosely to Kelly. The long break failed to revitalise them, with Matthew Gilkes, who had replaced Sangha, trapped lbw by Morris before NSW finally offered resistance under increasingly gloomy conditions through Holt, who unleashed several reverse sweeps to blunt Rocchiccioli.

But he lacked support with the tail throwing their wickets away, including Nathan Lyon, who holed out on the stroke of tea.

Fittingly, Morris wrapped up the innings to end Holt’s counter-attack and then led his team-mates off the ground leaving WA’s new bowling coach Tim Macdonald understandably grinning from ear to ear.