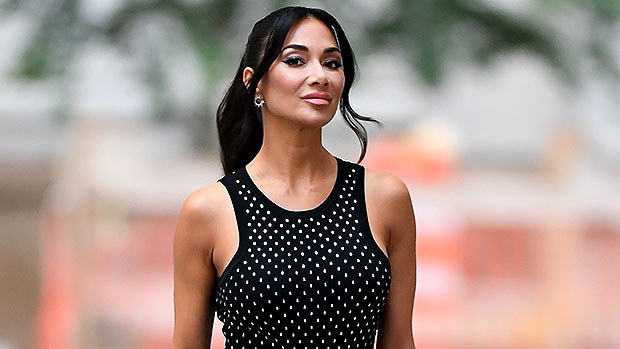 Nicole Scherzinger stepped out looking like a billion bucks in Los Angeles on Friday, Nov. 11 as she prepared to film the next season of The Masked Singer. The Pussycat Dolls member, 44, rocked a fabulous leopard print dress, looking absolutely incredible as she posed for her life outside a television studio, as seen in photos here.

The outing comes after the former reality star enjoyed a sensational summer bopping around a few gorgeous European locales, enjoying the scenery and relaxing in a plethora of bikinis. In August, she was in Mykonos, where she basked in the Mediterranean climate while rocking a patriotic two-piece featuring red, white and blue stripes. While in Spain, she took in the glorious sights while donning a halter neck blue bikini with a gaping cutout on the chest. When she stopped by the party island of Ibiza, Nicole added a pretty patterned sarong to her bikini collection, and it looked absolutely fabulous.

Accompanying the bronzed-toned beauty on her escapades has been her current beau, Thom Evans, a former rugby star. The pair made their relationship official in January 2020 after meeting on The X Factory: Celebrity where Nicole was a judge and Thom was competing as part of singing trio Tristar. When they celebrated their one-year anniversary, Thom took to his Instagram to share a sweet message, writing, “In a year that’s been filled with so much uncertainty, you have been my shining light.” Nicole replied, “You are my rock. I thank God for you every day. I love you so much.”

Before Thom, Nicole was partnered up with Bulgarian pro tennis player Grigor Dimitrov. Grigor was the first Bulgarian to earn a top 10 ranking and the first to earn more than $1 million in his career. Although they seemed to be going strong for a few years, the pair reportedly split in July 2018. She has also been linked to Harry Styles, British race car driver Lewis Hamilton and comedian Dane Cook.

Nicole Scherzinger’s Boyfriends: A Timeline Of Her Dating History