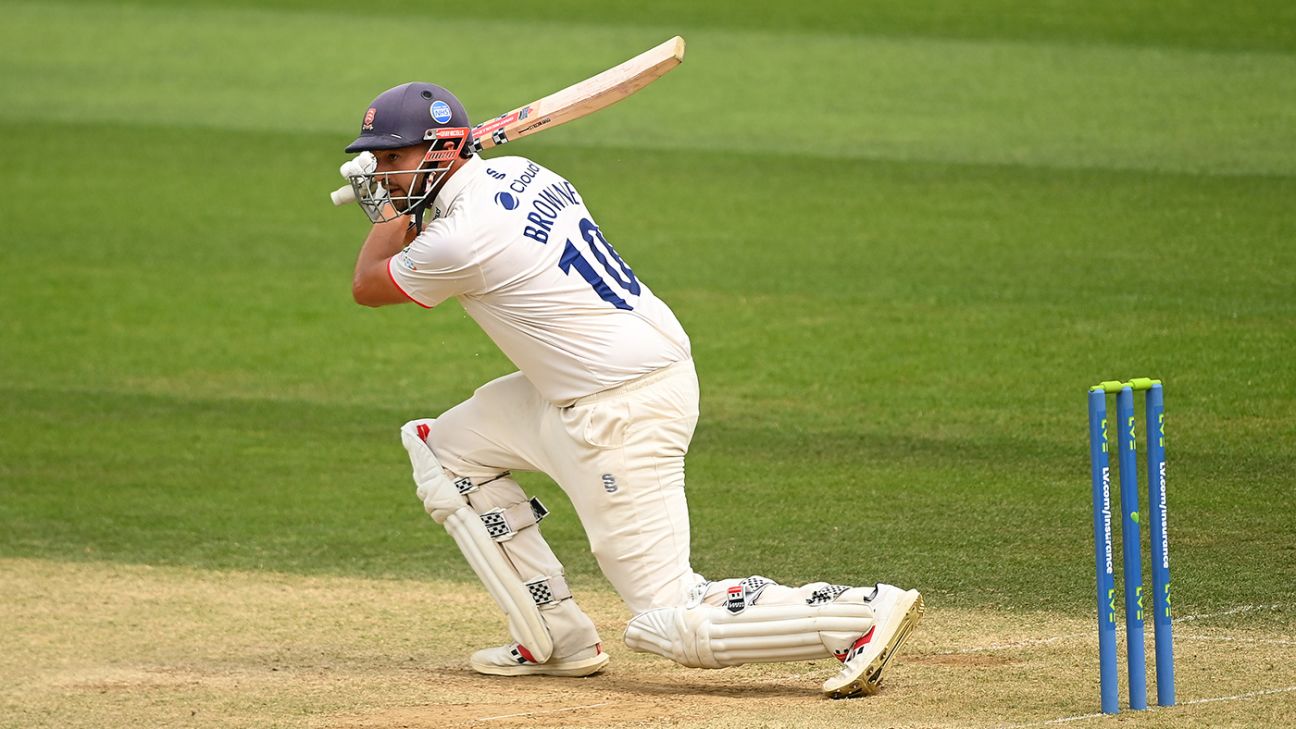 Comparisons are odious, and they have been since John Lydgate, a 15th century monk and poet once based in these parts, first uttered something approaching the phrase nearly 700 years ago. But odious or not, with the South Africa Test series approaching it was hard to ignore the match-up between Jack Leach and Simon Harmer.
Leach ground away for 39 overs without taking a wicket as Essex built a first-innings total beyond 500. By the time he turned one really sharply, Nick Browne was 203 and the ball ran away for a leg bye. Over ten-and-a-half hours, Browne, amassed an unbeaten 234, the worthiest and most consistent of efforts from a batter who knows his own limitations and is comfortable with them. It was his fourth double hundred in the Championship and the 20th in this season’s Championship – already the most since 2016.
When Somerset replied, and Harmer was introduced for the ninth over, it took him only four balls to take a wicket that had eluded Leach for the best part of two days. His first ball to Tom Lammonby turned sharply, enough to get into his head. The fourth delivery, a length ball, ran straight on to strike his off stump. Lammonby had gone the way of many before him. He was lost in confusion, front foot splayed way out to the leg side, maybe a pull, then maybe a late cut, then nothing at all. Harmer strolled out to the off side to be joined by grinning teammates. It was his 45th first-class wicket of the season, only Ollie Hannon-Dalby ahead of him.

There is a confidence about Harmer, a spin bowler devising sequences to befuddle his opponent. There was little sense of that from Leach, England’s premier spinner, good enough to have played 26 Tests, but often in a holding role. Not helped by bowling in the first innings of the match, he largely plugged a defensive line and rarely hunted out the rough to the left-hander outside off stump even though Browne was his major adversary. Browne took him for only three off-side boundaries and ticked over now and then with a leg-side single.

Out on the boundary, if some Twitter jousting between a group of Essex supporters and Craig Overton was to be believed, Overton had identified this Chelmsford surface as “a Harmer pitch” on the opening day. In essence, it is, although it lacks pace and bounce, and Matt Renshaw and Tom Abell appeared to put things into perspective, both countering Harmer calmly enough, and picking off the seamers. Then from nowhere, just before the close, a ball flew spitefully past Renshaw’s outside edge. They negotiated the second day, gratefully, at 99 for 1.

Just the thought of what might be to come had been enough to put Overton in mildly acerbic mood when he bit back at his Twitter taunters: “You forgot I was moaning about the fact [we] were changing in a marquee, have no showers and also portaloos for toilets at a first-class ground”.

Chelmsford has always been a cramped, if characterful, ground comprised in part by curious wooden huts, fulfilling a variety of purposes, although now quite a few of them appear to be closed. Add the racism allegations that will bedevil the county until the results of their independent enquiry are published – that enquiry began last November and should be published before the year is up – and John Stephenson, the chief executive, has quite a task ahead in charting a way forward. Some of the most prominent criticism has come from Jahid Ahmed, who played seven first-class matches between 2005, and who ultimately came to the conclusion that Essex felt like: “a white man’s world where brown people were outsiders”.

As Browne batted staunchly on, adding another 107 to his overnight 127, a marquee rung to speeches and laughter to mark a 75th birthday celebration for David Acfield, a former Essex offspinner, chairman and president, and one of five Board members who were forced to resign in May during the racism affair. Acfield, apparently, will still have a committee room named after him.

His birthday was marked by many of his fellow Essex players from the most successful, and entertaining, period in their history. As they exchanged old stories for the umpteenth time, Browne provided a constant backdrop. Their day was three-day cricket, played adventurously, but fortunately the red wine did not flow so freely that they appeared on the boundary edge demanding that he hit out for a quick declaration.

Browne is powerfully built, but he has been primarily used over his career as a Championship specialist. He has his own speed limiter built in, set just below 50 runs per 100 balls. On the rare occasions he did try to go big, a couple of thick edges persuaded him to banish the thought from his presence. But the nearest he looked to losing his wicket was on 205 when Harmer played the ball in front of square and hurried him through for a tight single. He did accelerate, but only marginally – his bedding-in 50 took 124 balls, followed by 104, 95, then 94 – but his tenacity never wavered.

Tom Lammonby found some value in the day with a career-best 3 for 35 (he had only previously taken six first-class wickets), the best of them the removal of Paul Walter’s off stump when he seamed one back slightly through the gate. Matt Critchley fell trying to run a wide one and Adam Rossington, who played with gusto for his 32, slog-swept him to deep midwicket.

The innings then came to a halt as Browne and Harmer ground on, Harmer having seven from 49 balls at one point. In the marquee, some famous old players might have been a little impatient. But Harmer was probably just timing the declaration for his own needs, awaiting signs that the ball was ready to turn. Leach will hope that Somerset bat well enough to give him another opportunity on a wearing pitch, but he will be lucky.