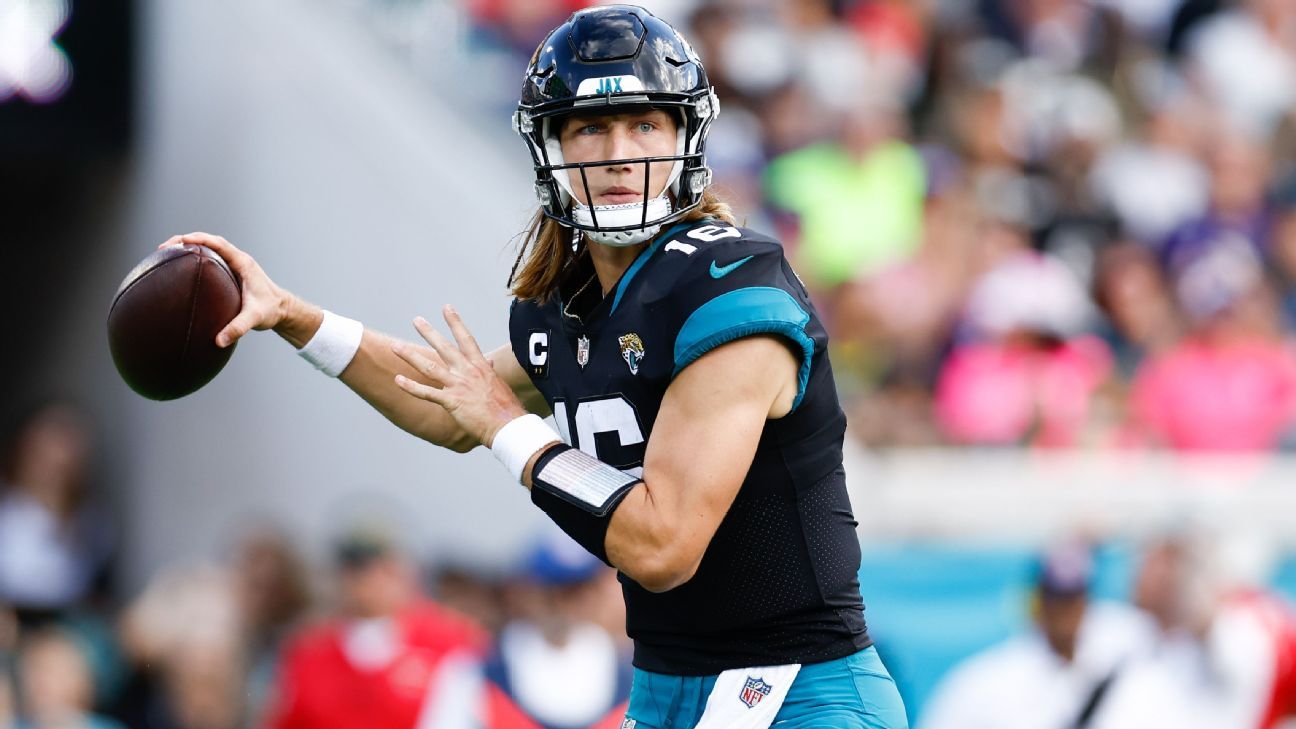 Week 18 of the NFL season brings us all sorts of playoff scenarios, from who’s in and who’s out to seeding. Games without postseason implications can be particularly difficult to navigate because it can be a guessing game of which teams will or won’t play starters or how long they will play.

So what is worth looking at from a betting perspective? And which are the best plays to help you make smart wagering decisions?

Note: Lines are from Caesars Sportsbook unless otherwise indicated.

The Tennessee Titans and Jacksonville Jaguars meet Saturday night to decide the winner of the AFC South (8:15 p.m. ET on ESPN/ABC/ESPN+). The Jaguars (-6.5, 40) are winners of four straight, while Tennessee is on a four-game losing streak and dealing with injuries across the board. Who do you see winning this game and earning the division title and fourth seed in the AFC playoffs?

Fortenbaugh: Beer-money bet on the Titans. With nine days or more to prepare for a regular-season game, Mike Vrabel is 9-1 straight-up and 9-1 ATS while beating the closing point spread by close to 15 points per game. Derrick Henry is back, and Joshua Dobbs has another week to figure out the Titans’ playbook. I think this will be a competitive game.

Fulghum: I like the Jaguars to close this thing out, win the game and the division. I don’t love laying the number, but I do love the over 40. Trevor Lawrence is playing incredible football and gets a great matchup vs. a depleted Titans defense that was already one of the league’s easiest to pass against this season. On the other side, Henry is freshly rested to handle a massive workload against a team he has traditionally dominated in the box score.

Schatz: I like the Jaguars in this game and would lay the points as well. Our DVOA ratings have a big gap between the Jaguars (15th in weighted DVOA, which gives less strength to early games) and the Titans (26th in the same metric). And that’s without considering that Dobbs will be making only his second NFL start. ESPN Stats & Info has the Jaguars 10th in the league in pressure rate, and they should be able to pressure an inexperienced quarterback such as Dobbs. Meanwhile, Lawrence has grown into one of the top 10 quarterbacks in the game, and the Titans’ defense is 28th against the pass compared to second against the run. The Jaguars should put this game in Lawrence’s hands and win easily.

Marks: I have the Jags winning the matchup but the Titans covering. I also like the Titans +3.5 in the first half. I will also play the under at 40. The Titans are a solid first-half team and utilized last week to rest up and get healthy for this all-or-nothing matchup. Dobbs will be under center, which will make the Jags respect the passing game more so than they would with Malik Willis at the helm. The under has hit 11 of 16 times in Titans matchups, and their defense should be ready to roll. For the Jags, unders have hit five times in seven home games this season. For props, I like Zay Jones over 4.5 receptions (-121) and 53.5 receiving yards (-131), considering he has bonus incentives heading into the game.

Snellings: I’ll take the Titans with the points. The Jaguars have played much better of late, but it just feels like the Titans are that veteran team that knows how to win tough games. I expect this one to be physical and ugly, with the Titans rested and relatively healthy after their “bye” last week. Even if Lawrence finds a way to pull it out at the end, I expect it to be close.

Doug Kezirian expects the Eagles to “put up some numbers” in their game vs. the Giants this Sunday.

The last spot in the AFC playoffs comes down to the New England Patriots, Miami Dolphins and Pittsburgh Steelers. It’s win-and-in for the Patriots at Buffalo (-7, 42.5). The Dolphins, potentially without their top two QBs, are a home underdog vs. the Jets (-1, 38.5) and need a win and Patriots loss. Pittsburgh (-2.5, 40.5), once 2-6, can get in with a win over the Browns and losses by the Patriots and Dolphins. How do you see any of these games ending up, and who will grab that No. 7 seed?

Schatz: Despite the presence of Skylar Thompson as the quarterback for Miami, our playoff odds simulation at Football Outsiders gives the Dolphins the best chance of winning the seventh seed, at 40%. Personally, I favor the Steelers to get in. It’s hard to know the current psychological state of the Bills, but if they are prepared for this game, the fact remains that they are a much better team than the Patriots and it’s a particularly bad matchup for New England. The next domino would be the Jets and Dolphins, and I do think the Jets’ defense has a strong chance of shutting down Thompson. The Miami defense has been better since Bradley Chubb arrived, bringing more pressure, but Mike White should do enough to win. At that point, the Steelers just need to beat Cleveland, which has been much worse on offense (surprisingly) since Deshaun Watson took over at quarterback. If I had to lay money, I would stay away from the Bills spread because of the emotional unknowns, take the Jets -1, the Steelers -2.5 and the Bills on the money line.

Marks: Steelers -2.5, under 40.5. Lots of motivation here for the Steelers to win with an opportunity to make it to the postseason and for Mike Tomlin to avoid his first losing season. The Steelers’ defense has improved since T.J. Watt returned, having allowed 250 yards or fewer in three straight games and ranking second in INT rate. The Browns’ offense has struggled with QB Deshaun Watson, but the defense is allowing only 13.4 points per game since his Week 13 return. Cleveland also could be without OT Jack Conklin (ankle) and CB Denzel Ward (shoulder).

There’s still time to sign up for ESPN Fantasy Basketball! Play for free

What is your favorite player prop for the weekend?

Fulghum: Derrick Henry over 21.5 rushing attempts (-125). As I said earlier, I expect a heavy dose of Henry. The Titans likely cannot win this game leaning on Dobbs and the passing game. Mike Vrabel knows this. Henry is rested after sitting out Week 17 and is ready to touch the ball 25-plus times.

Schatz: Let’s give some love to breakout Titans tight end Chigoziem Okonkwo (over 23.5 yards). The Jaguars rank 31st in DVOA against tight ends and 27th in yards allowed per game (adjusted for opponents). The over/under on Okonkwo is just 23.5 yards (-137), and he should be a good security blanket for an inexperienced Joshua Dobbs. Okonkwo has only 34 yards total the past two weeks, but he went over this total in seven straight games before that, including Week 14 against Jacksonville (45 yards and a touchdown).

Marks: Zay Jones over 4.5 receptions (-121). Week 18 is all about incentives. Jones has an opportunity to make $250K to $500K more in his game against Tennessee. The vulnerable pass defense is where you attack the Titans, and opposing QBs average 40 passing attempts a game. Trevor Lawrence will be featuring one of his favorite targets on Saturday night.

Tyler Fulghum explains why he’s laying the points with the Packers vs. the Lions in Week 18.

What is your favorite bet for the weekend’s games?

Fortenbaugh: Browns-Steelers under 40 points. Don’t look now, but Cleveland’s defense has finally come around, as that unit is surrendering an average of just 14 points per game over the team’s past six outings. The same cannot be said about the Watson-led offense, which is averaging a disappointing 16.8 points per game in the quarterback’s five starts. You know T.J. Watt and the Steelers’ defense will bring it, so I see this game being your typical AFC North grind fest.

Fulghum: Green Bay Packers -4.5 vs. Detroit Lions. Aaron Rodgers is 28-4 at Lambeau Field in December/January regular-season games. In a must-win situation with a playoff spot on the line, I believe the Packers finish out the 5-0 close to the season needed to qualify for the postseason and they do so with a cover. The offense is generally healthy, the defense is playing its best football of the year and the Lions’ offense is nowhere near as efficient on the road as when at home at Ford Field.

Schatz: Please give me under 43 in the Minnesota Vikings–Chicago Bears game. I don’t need to give you stats here, just a name: Nathan Peterman. I know, you’re probably thinking “take the over, Peterman will throw two pick-sixes,” but interceptions rarely turn into pick-sixes no matter how memorable those plays are. It’s more likely that the Bears just don’t score many points and the Vikings run out a lead to keep their score down as well. Don’t forget they are playing outside in cold Chicago instead of indoors in Minneapolis.

Marks: New York Giants +14 at Philadelphia Eagles. The Giants have secured the sixth seed and are expected to rest many of their starters, but their backups are pretty solid. QB Tyrod Taylor and RBs Matt Breida and Gary Brightwell can handle the load just enough to cover. The Eagles will be without OT Lane Johnson (9-22 SU without), and QB Jalen Hurts, who is expected to start, will be playing with an injured shoulder. Eagles win, but Giants cover.