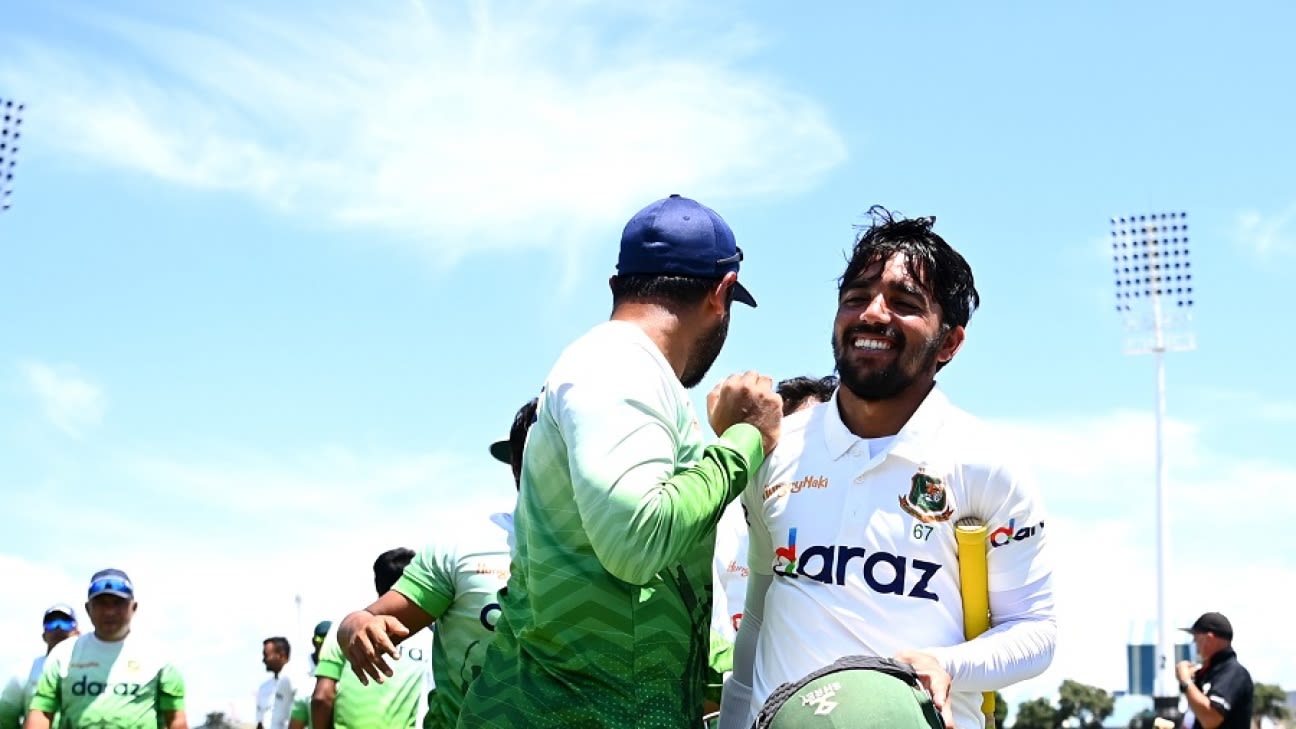 The visitors put together a team effort that provided world cricket with one of the greatest upsets in Test history. It also radically changed the mood of a dressing room that was in a a ten-game slump.
That Bangladesh out-bowled New Zealand was perhaps one of the highlights of this Test win. Ebadot Hossain took 6 for 46 in the second innings, with his second spell split over the fourth evening and fifth morning. He broke a crucial third wicket partnership between Will Young and Ross Taylor, before taking three wickets in seven balls. Next day, he removed Taylor and Kyle Jamieson to complete the first five-for by a Bangladeshi fast bowler in eight years.
Bangladesh had several performers in the game too. Newcomer Mahmudul Hasan Joy was quite tenacious during his 228-ball 78. Captain Mominul Haque top scored in the first innings, and ensured there were no hiccups in the chase. Najmul Hossain Shanto and Liton Das playing freely after the initial graft showed Bangladesh’s young batters could change gears.
Mehidy Hasan Miraz was an unsung hero, bowling long spells, and scoring 47 crucial runs after the top six batted very well. Yasir Ali, like Joy, was playing his second Test and made a critical contribution, as did Shoriful Islam with his first innings bowling and second innings catch at midwicket to dismiss Jamieson. Bangladesh dropped four catches in all but made sure they caught the others at least.

New Zealand will have some areas to worry about. Their much-vaunted fast bowling group didn’t quite attack the stumps as they would have wanted. Tim Southee and Jamieson had a difficult outing. Rachin Ravindra toiled but it was quite clear that they missed Ajaz Patel’s confidence.

Batting-wise, the collapses in both innings is cause for concern. Perhaps they are missing Kane Williamson but the likes of Ross Taylor, Tom Latham, Henry Nicholls and Devon Conway are a fine combination to have in a batting line-up.

Expect New Zealand to hit back in Christchurch. Bangladesh are, again, the underdogs despite winning the first game. People at home are really pleased that they could beat such a great home team. And more success may yet be on the horizon if, as Mominul said, they can stick to what they do best and be positive about it.

Will Young struck twin fifties in the first Test and was proficient scoring both sides of the wicket. He seems to be the answer if someone is looking for New Zealand’s batting future. But he would be hurting from the way he got out in both innings. His second innings dismissal was a crucial point in the game, as it opened up one end for Bangladesh.

Mominul Haque won the praise of many senior figures in Bangladesh cricket for his tenacity during tough times, and for motivating a young team to a great win in Mount Maunganui. Mominul’s contribution with the bat was also significant, top scoring with 88, ensuring they got out of tight spots and thrived.

There was some talk of resting either Southee or Trent Boult even after the first Test defeat but it still seems unlikely. They do have Matt Henry in the squad.

The first-innings average score at Hagley Oval over the past five years is 263. New Zealand have lost only one Test in their last eight at this venue, since 2016. Weather forecast has dry conditions for the first three days, with showers likely on the fourth and fifth.