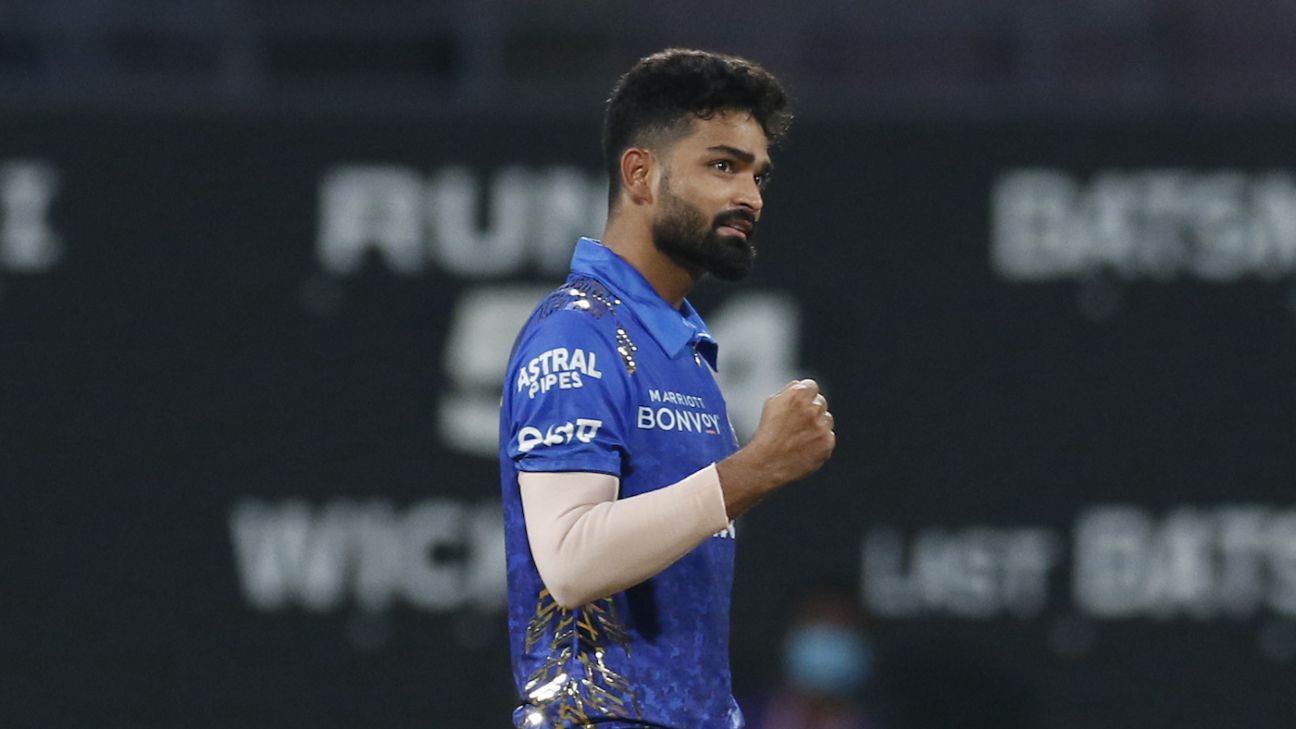 Nine games in, Mumbai Indians have their first win of IPL 2022, giving a perfect 35th birthday gift for the captain Rohit Sharma. That the win came against Rajasthan Royals, touted to go all the way on current form, should come as a massive boost. That it was set up nicely by a debutant who kept the marauding Jos Buttler honest for much of his knock, must be encouraging.

In the second over, Daniel Sams reprieved Buttler as he misjudged the trajectory of his pull. Sams ran in from deep square and quickly realised he had overrun the ball and back-pedaled. But it was too late. What should’ve been a wicket resulted in a boundary. Jasprit Bumrah, who had dismissed Buttler four times in eight innings, missed out on a fifth.

Off the third, Tim David, brought in for Dewald Brewis, made a right royal mess of a straightforward offering at deep point. This time, it was Devdutt Padikkal who was reprieved. An uppish cut burst through his hands at deep point and went to the boundary. Sams, the bowler, looked on in disbelief.

Shokeen and Kartikeya make an entry

Bumrah. Ishan Kishan. Tilak Varma. Rahul Chahar. Hardik Pandya. Krunal Pandya – in no order, these are some names Mumbai have unearthed over the years through their vast scouting network. Hrithik Shokeen, the offspinner, and Kumar Kartikeya, the left-arm spinner, are the latest entrants to the uncapped club.

Shokeen is in only his third game. He comes across as a thinking bowler who isn’t deterred by batters looking to take him on. Getting rid of that fear, experienced bowlers will tell you, is half the battle won. He deceived Padikkal in flight and did him in with his drift as he only managed to skew a lofted hit to long-off in the fifth.

Soon after, Kartikeya got into the act. A left-arm all-variety bowler who slips in an excellent wrong’un, he has a deceptive carrom ball along with his other bag of tricks – including the traditional left-arm orthodox, a seam-up and a split-finger knuckleball – and he impressed with his accuracy and control straightaway, delivering three straight overs in which he conceded just one boundary and dismissed Sanju Samson second ball. A break-free shot over point led to a simple catch for David at deep point.

Kumar Kartikeya, on his Mumbai Indians debut, returned 1 for 19•BCCI

A combination of losing Samson and playing disciplined spinners on a slow surface that forced Royals to recalibrate meant Buttler struck at less than 100 for much of his knock. For a period of 32 balls between overs 9.1 and 14.4, Royals were denied a boundary. Daryl Mitchell too struggled to up the pace.

Buttler was on 43 off 46 with six overs left. And he found his release in the following over when he peppered the arc between long-off and deep midwicket to hit Shokeen for a sequence of 6,6,6,6. The fifth was a dot and the sixth was cleverly bowled from around the stumps and away from his hitting arc. Buttler picked out long-off and was out for a 52-ball 67. With Riyan Parag also falling quickly, Royals needed one of their lower-order batters to finish things off. R Ashwin polished off the innings with a neat eight-ball 21 as Royals posted 158.

A hint of grip and bounce was enough for Ashwin to make an early entry with the ball as Rohit’s sweep found square leg in the third over. Kishan opened his scoring with an upper cut for six, and for a while it looked as if the lost touch and timing that had eluded him for much of the season was coming back. But he was a victim of over-aggression, as an attempt to take on Trent Boult with the short ball led to him top-edging a pull to Samson in the sixth.

Suryakumar Yadav and Tilak Varma knuckled down and kept the scorecard chugging along. Suryakumar swept the spinners off their lengths, brought out his wrists against pace and kept picking boundaries every time there was a semblance of pressure on the batters. The shot of the evening – a swat from nearly a seventh-stump Ashwin delivery – to clear wide long-on raised his half-century. At that point, Mumbai needed 46 from 36.

But there was a small twist. Both Suryakumar and Varma fell looking for big hits, leaving Mumbai with a few nervy moments. David brought out his big-hitting game against spin and was aided with some luck along the way as he raced down the runs. But things got a little nervier when Kieron Pollard fell with the side needing 4 off 5. Sams then biffed the first ball into the stands to seal Mumbai’s win with four balls to spare.