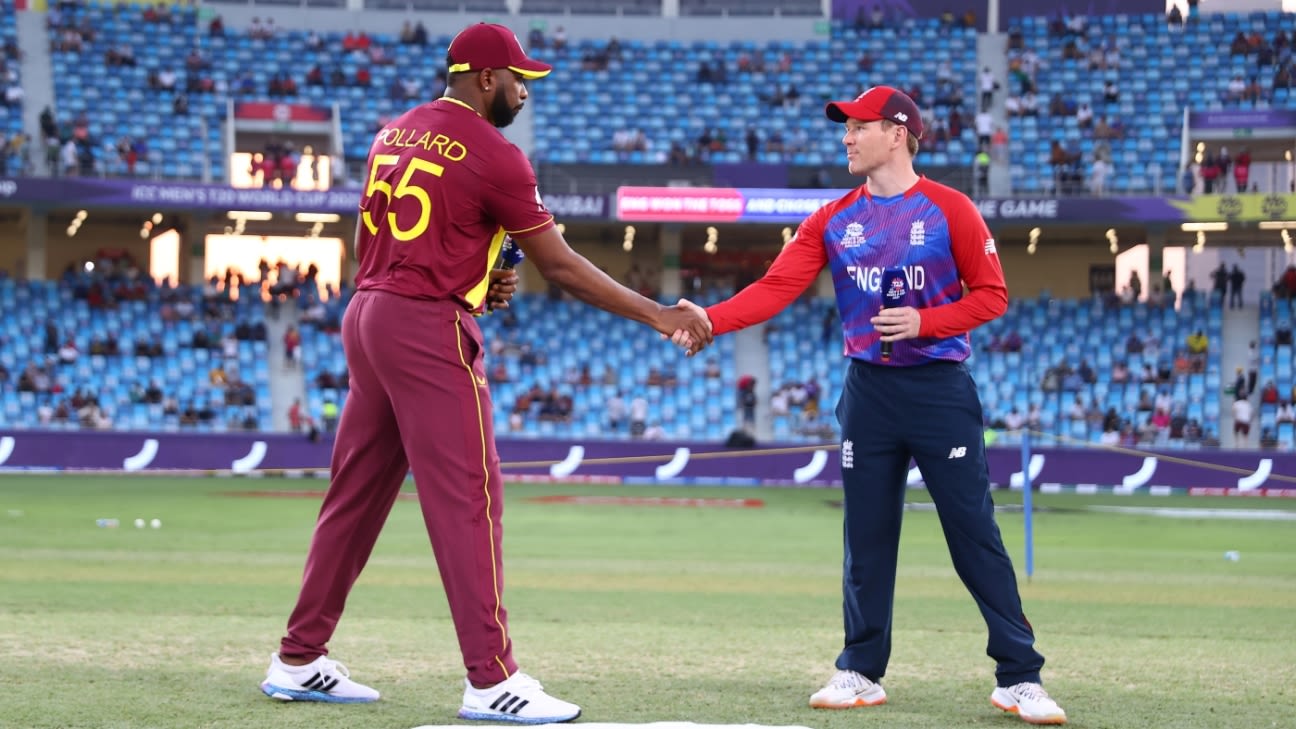 Gird your loins, get back on the horse, let the show go on. Again. So soon after the Ashes debacle, it barely seems feasible that another England campaign is underway already – and to judge by Sam Billings‘ 15,000 km and four-flight sprint from Hobart to Bridgetown (to follow up his 500km, nine-hour drive from Brisbane to Hobart earlier in the month), it probably isn’t reasonable to expect the white-ball squad’s one representative from that fifth-Test thrashing to be sufficiently combobulated to take his place in Saturday’s starting line-up at the Kensington Oval.

But such time-zone gallivanting is the way of the modern touring world. Two distinct England squads, with ever fewer cross-over characters certain of a place in both set-ups, are spreading themselves across the globe, to cover off the myriad bilateral obligations that keep the creaking jalopy of international cricket on the road.

And in that respect, let no-one be under any illusions how important this particular series is. The ECB dropped a clanger in October last year, when they unilaterally bailed out of their goodwill stop-over in Pakistan – a two-match tour that should have been their first to the country since 2005, and had been arranged to say thank you for the PCB’s efforts in ensuring that the Covid-stricken summer of 2020 went ahead without a hitch.

The same and more applies to this campaign. Before Pakistan’s arrival that summer, West Indies were the first touring team to brave the restrictions of the bio-secure lifestyle, and as a reward for their over-and-above efforts to mitigate the ECB’s multi-million-pound losses, it was agreed last March that this tour would be extended from three T20Is to five, and from two Tests to three.

The timing is ironic, in a week when the ECB have been hinting at the need for quality over quantity to improve their Test fortunes in particular. But for now, the money in international cricket talks loudest and, at this crucial post-Covid juncture, so too does the goodwill.

Such rapid format-hopping isn’t actually anything new, mind you. For years it was tradition for England’s cricketers to remain Down Under after each Ashes thrashing and brace for further beastings in the white-ball format – in 2006-07, the outfield at the SCG had barely been cleared of Australia’s whitewash-sealing paraphernalia when many of the same combatants on both sides returned four days later for their one-off T20I (unsurprisingly, the result was another Australian thumping, even if Andrew Flintoff’s men miraculously bucked the usual trend in the subsequent Commonwealth Bank series.)
At least this time, you sense, the visitors will have more focus on the matter at hand. Certainly Jason Roy seems to have his game brain in gear, to judge by his blistering 36-ball hundred in England’s warm-up match against a Board President’s XI. It was the first century by an England opener since the T20 World Cup and an apt reminder of England’s enduring prowess in the white-ball format, given how quickly their efforts at that tournament became subsumed into the wider narrative of English existential woe.

The need to balance England’s ambitions across formats was an enduring theme in 2021, particularly through the thorny issue of rest and rotation, and while it was perfectly justifiable to give Eoin Morgan’s men every chance to cement their status with a second global trophy, hindsight has blown a big fat raspberry at the ECB’s attempts to compete on two fronts.

Far from being a competition to match the rollercoaster of 2019, the World Cup just gone was an anti-competitive turkey, too readily dominated by correct calls at the toss, and too easily forgettable in its squeezed window between the IPL and the Ashes. England showed their prowess in snatches – most particularly in an against-the-head win over Sri Lanka in Sharjah, and a group-stage thrashing of the eventual champions Australia – but for all the jeopardy that that campaign entailed, they’d have been better off playing heads-or-tails at the pre-tournament dinner than actually planning a coherent strategy.

That said, West Indies would have needed rather more than just a weighted coin to stay competitive at the same event. Five years on from their thrilling triumph over England in the 2016 final, an ageing outfit finally hit the buffers with a clang. Their once-radical policy of sacking off singles in favour of six-hitting came a cropper, and the rematch in Dubai was anything but, as Moeen Ali and Adil Rashid combined to rout their opponents for 55.

West Indies’ campaign culminated in four defeats out of five, the exception being a gutsy defence against Bangladesh, and it confirmed the passing of an epoch-defining generation, with the likes of Dwayne Bravo, Lendl Simmons and Ravi Rampaul all potentially saying their farewells – and so too the inestimable Chris Gayle of course, although he will surely never officially quit.

And now, with only ten months to go until yet another T20 World Cup in Australia – a tournament for which the draw was made on Friday – it’s time to mould a new team fit to lace their forebears’ Champion-dancing shoes. The initial impressions haven’t been full of promise – a 3-0 thumping by Pakistan in Karachi was followed by Ireland’s 2-1 win in their ODI series last week, after which Phil Simmons’ concerns about the quality of young batters in the Caribbean rather echoed the existential concerns about county cricket’s next generation of Test performers.

For England, however, this is a chance to take stock after the disappointments of the winter. Given the success of their own batters in the BBL, there’s no reason to think they won’t once again be among the favourites come the next World Cup in November. But as their opponents inadvertently demonstrated in the tournament just gone, a failure to evolve can catch even the most groundbreaking outfits on the hop. Morgan, in particular, may find himself chewing over that particular point with vigour.

Phil Salt admitted to ESPNcricinfo this week that he had been underwhelmed by his England debut in Cardiff last year – after sampling the New Year’s Eve party atmosphere at the Adelaide Oval in the BBL, and similarly rowdy venues on the T20 franchise circuit, it was all a bit genteel for his liking, as he made his international bow against Pakistan, in front of a Covid-limited crowd and in bizarre circumstances following the quarantining of the main England squad. Perhaps things might feel more real second-time around, however, as he prepares for a probable T20I debut in Barbados – the island where he spent six of his formative years from the ages of 9 to 15. Salt’s haul of 104 runs from 89 balls in three ODIs showcased a relentless, full-throttle approach that marks him out as something of a Roy clone – he has no qualms about cranking up the aggression from the outset, even if bowlers such as Shaheen Shah Afridi have got the measure of his methods. And though the eventual return of Jonny Bairstow and Jos Buttler is likely to squeeze him back onto the bench, Morgan is known to value selflessness when it comes to selecting his batters. He’s got a chance to impress with his intent as much as his returns in these five games.
At the age of 26, Nicholas Pooran’s time is now. The West Indies batter averages 23.47 in 49 T20Is, at a strike-rate of 128.03 that doesn’t quite reflect his pre-eminence either. However, with the passing of an irreplaceable generation, his years of apprenticeship in their batting line-up have suddenly come to an end. Two-and-a-half years have passed since Pooran’s solitary international hundred – a stunning 118 in West Indies’ valiant pursuit of a hefty Sri Lanka target at the 2019 World Cup – but he made his highest T20I score of 64 in his most recent outing in Karachi, which hints at an upward trajectory. Either way, it’s possible he’s come through the toughest run of form of his career to date, the haul of 85 runs in 12 IPL matches for Punjab Kings in last year’s IPL, which included 28 in his first seven games in India, prior to the tournament’s postponement.

There are a number of marginal calls for West Indies to make as senior players return having missed the 3-0 defeat in Pakistan. Kyle Mayers opened ahead of Shai Hope in West Indies’ practice match and may get the nod to partner Brandon King. Fabian Allen has recovered from Covid-19 and is likely to start in the lower-middle order.

Liam Livingstone missed England’s warm-up game with a mild illness and will sit out the opening T20I as a precaution – although it is understood to be non-Covid-related. Billings raced to Barbados from Hobart after his last-minute Test call-up but is unlikely to be ready to play after a gruelling long-haul journey. That would leave Tom Banton and Salt competing over the gloves, with England’s warm-up XI suggesting that Salt could be recast as a finisher, especially in Livingstone’s absence. England opted for a batting-heavy strategy in the T20 World Cup but may consider fielding an additional seamer, or the extra spin of Liam Dawson.

Kensington Oval will be limited to 50% capacity, due to Covid restrictions, but administrators are anticipating good crowds throughout the five-match series. There has not been much T20 cricket played there of late but scores were surprisingly low there during the 2019 CPL, with only one team breaching the 150 mark in the five games the ground hosted. The forecast suggests that cross-winds could be a factor, and there is a small chance of a rain interruption at some stage in the run chase.

“In Pakistan, yes we lost the three games but there was a lot more energy, a lot more enthusiasm and that’s the group that’s coming into this series here against England. We have a lot of new faces and a lot of guys who want to make an impression and be part of the team going forward, so I think from that point of view it is not as difficult as it would seem.”
West Indies’ coach, Phil Simmons believes his side has plenty room for improvement.

“We’ve got some gun players. There are some players in training that have impressed so much. You’ve seen what Banton can do, he’s an incredible talent, a young talent and will be learning a hell of a lot.”
Jason Roy has high expectations from one of his potential opening partners.