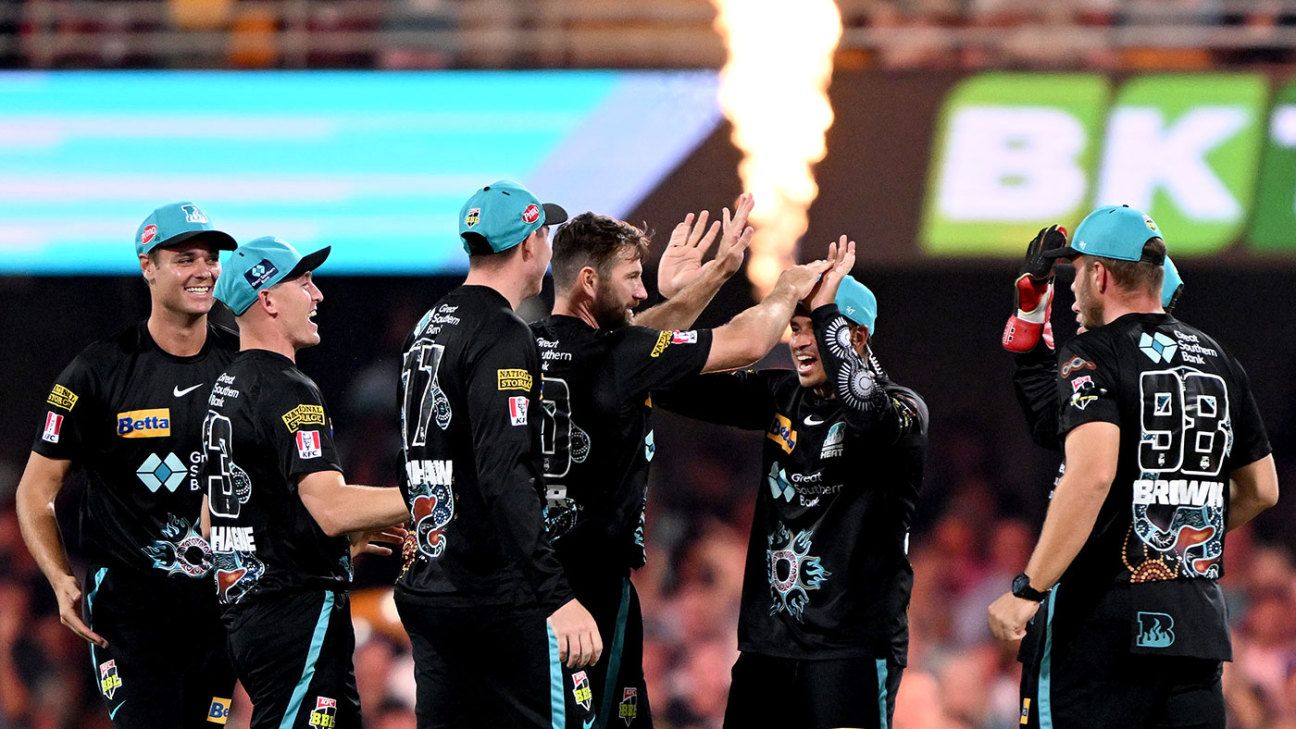 A resurgent Brisbane Heat continued their charge for a BBL playoffs berth while denting Hobart Hurricanes’ chances with a pivotal 12-run victory at the Gabba.

Defending 163, Heat were in the box seat after outstanding bowling from Michael Neser before surviving a late onslaught from big-hitter Tim David.

Three straight wins has lifted Heat firmly into playoffs calculations, while Hurricanes are currently outside the picture after being unable to break their drought on the road.

Heat needed early wickets to defend what seemed a modest total at the traditionally batting-friendly Gabba. Neser obliged with the wickets of struggling Ben McDermott and Zak Crawley as he produced a slew of outstanding outswingers in his two-over burst. .

But with David looking ominous, Neser returned in the 15th over after Hurricanes took the power surge and he bowled well under pressure. He then bowled the penultimate over and removed Mitchell Owen, but a first ball six from Faheem Ashraf breathed life into the contest.

With Hurricanes needing 18 runs off the final over, left-arm quick Spencer Johnson kept his cool against a rampant David with superb clutch bowling as Heat held on to move into the all-important top five for the first time this season.

After Hurricanes slumped to 14 for 2, they needed a spark from skipper Matthew Wade who had been in a form slump with just 68 runs in his last five innings while battling controversies.

Wade made his move in the fourth over with a couple of boundaries off Johnson and unleashed trademark inventiveness against spin. But he fell for 45 in the 13th over with the burden falling on David, who put the foot down in the 18th over with two sixes off spinner Matthew Kuhnemann.

His gamble to decline singles briefly paid off, but ultimately it proved too tough a task for David as Hurricanes lost their seventh straight game on the road.

Khawaja made 18 before spooning a return catch to Faheem, while Labuschagne lacked fluency in his 25-ball 28. Having only played one T20I in his career, Labuschagne has been out to prove his formidable longer format game can translate into success in T20 cricket.

But he did little to ease the doubters with a scratchy innings, where he struggled for timing, before falling after the drinks break at a pivotal juncture.

Heat appeared set to fall well short of a competitive total before solid knocks from Matt Renshaw and Sam Hain powered them to respectability.

Hurricanes’ attack hoped for a bounce back after being thumped by in-form Scorchers batter Aaron Hardie, who in fairness has been dismissive of most bowlers this season.

It was a task made more daunting without injured spinner Paddy Dooley, who has enjoyed a breakout season to emerge as an unlikely talisman of the attack.

Frontline quicks Riley Meredith and Nathan Ellis were expensive, but an outstanding performance from left-arm seamer Joel Paris helped restrict Heat. Paris has been in and out of the line-up and before this match claimed just three wickets from five innings at an economy rate of 8.56.

But he conjured swing during the powerplay and then dismissed Labuschagne in the 11th over. Paris also bowled a clutch over at the death to finish with figures of 2 for 15 in four overs in his best performance of the season.

Faheem was also accurate to frustrate Heat, who failed to hit a boundary for six overs at one point. Sharp catching capped a notable improvement in the field for Hurricanes.