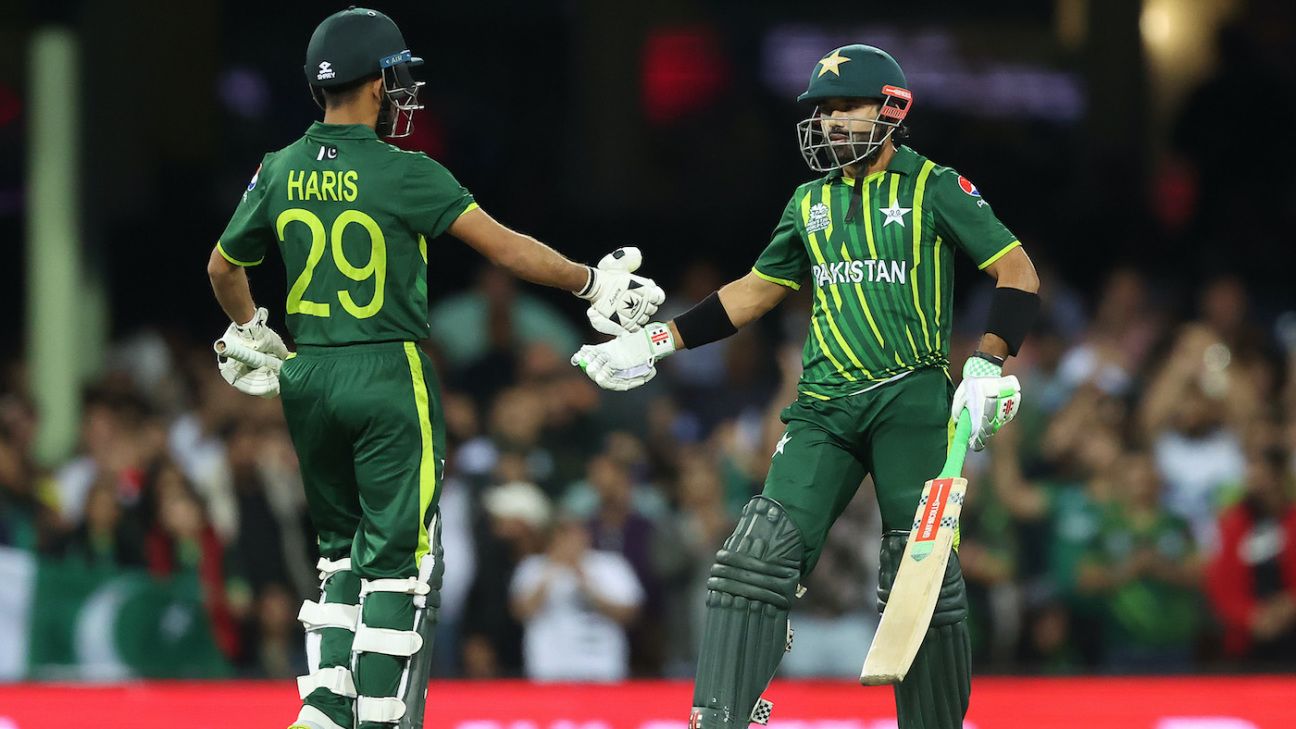 Pakistan, who lost to Zimbabwe earlier in the tournament, who limped into the semis thanks only to Netherland’s unlikely win over South Africa, have stormed into the final of the 2022 Men’s T20 World Cup, having executed a near-perfect game.
So much that is great about this Pakistan team fell into place in this game. Shaheen Afridi got his first-over wicket, trapping Finn Allen in front with a vicious inswinger third ball. Their seamers locked down the back end of the innings, conceding just 53 runs off the last six overs (this is something they’ve done well right through the tournament).
Then, having restricted New Zealand – who struggled to find boundaries – to 152 for 4, their openers returned to dazzling form. Having been dropped in the first over, Babar Azam struck 53 off 42 balls, whipping quicks through square leg, thumping spinners down the ground. Mohammad Rizwan was even more impressive, hitting 57 off 43 as the pair put on 105 for the first wicket.

There was a slight stutter towards the end, as Pakistan lost their openers, and slowed down a touch. But Babar and Rizwan had foolproofed the chase. They got there with five balls to spare.

Pakistan dominate the death
At 99 for 3 at the end of the 14th over, New Zealand’ weren’t exactly flying, but given the firepower in their middle order, they could have had a score in excess of 160 in their sights. Pakistan’s quicks mixed up their pace, bowled expertly to their fields, and were backed up beautifully in the field, where Pakistan excelled this evening. New Zealand could muster only three fours in the last six overs, relying instead on hard-run twos, Daryl Mitchell taking the lead on those.

Rizwan and Babar take New Zealand’s quicks down
Trent Boult could have had Babar in the first over, when the batter nicked his first ball. But a diving Devon Conway could only get the webbing of his gloves to the chance, and couldn’t make it stick.

In Boult’s next over, Pakistan’s openers kicked the innings up into the high gear at which it would stay for the duration of their stand. Babar crashed Boult through point, before Rizwan glanced him fine, then thumped him square on the offside as well, the pair taking 15 off that over. Off Tim Southee’s second over, they took 15 again, Rizwan slamming him twice through midwicket, before Babar cracked him through backward square leg.

The spinners provided New Zealand a little control, but the pair negotiated that period smartly, rarely failing to find the boundary off the bad balls. By the end of the 12th, the required rate was just 6.37.

Williamson and Mitchell provide a sliver of hope
If there was one period New Zealand can claim to have been on top, it was likely overs 11 to 14 of their own innings. They’d been 59 for 3 at the halfway stage, desperately needing to get a move on. Mitchell hit two fours off the 11th over, bowled by Shadab Khan. In the 13th over, Williamson hit the innings’ first six, smoking Mohammad Wasim over deep square leg, before Mitchell launched Shadab into the sightscreen in the 14th. All up, they scored 40 runs in those four overs. They did not match that rate of scoring after that period.

Haris eases Pakistani nerves
There was a slowdown after Babar and Rizwan were parted, and a slight unease when Rizwan was out at the end of the 17th over, leaving Pakistan with 21 to get off 18 balls. Mohammad Haris put Pakistan back on the smooth road to victory next over, however. He backed away and drilled a Lockie Ferguson yorker wide of mid-off for four, before sitting back to hook him into the stands next ball. He was out before the winning run came, but he’d made the game safe.