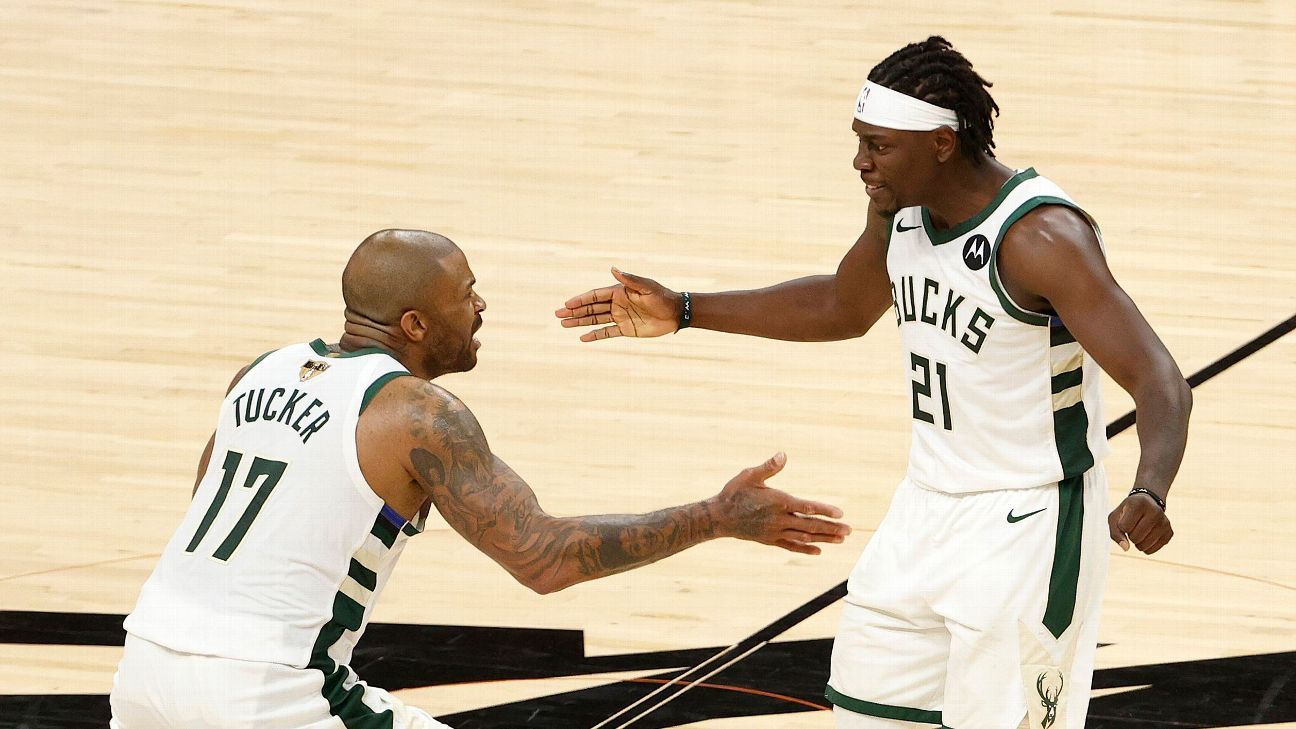 PHOENIX — Jrue Holiday knows what everyone wants him to do. No one needs to tell him to be more aggressive offensively. Or to keep shooting, that his shots will eventually start falling.

“We always kind of throw that out there,” said his father, Shawn Holiday.

But Shawn has coached his son long enough to know how self-observant he is. Coming into Game 5 of these NBA Finals, Holiday had hit just 33% of his shots (23-of-69), including an especially ugly 4-for-20 in Game 4.

“After the game, we might get in the car and say, ‘That’s a rough one,'” Shawn said. “But we really don’t talk about the game much, because he already knows what he has to do.”

Be more aggressive. Keep shooting. Trust that eventually, his shots will fall.

“My dad thinks I’m the best player in the world,” Holiday said with a smile after scoring 27 points, dishing out 13 assists and creating the play of the night with a steal off Phoenix Suns guard Devin Booker with 16.7 seconds remaining in Saturday night’s Game 5. A perfect alley-oop to teammate Giannis Antetokounmpo followed to seal the Milwaukee Bucks‘ 123-119 win to take a 3-2 lead in the Finals.

“He just feels like I can do everything — play 48 minutes, I don’t need to come out, I don’t need a break. But really just be aggressive the whole game.”

As Jrue points out, his dad is a bit biased when it comes to him. But Shawn’s message to stay the course is important here.

How many star players could struggle from the field as much as Jrue Holiday had before Saturday night and not get down on themselves?

How many would shrug after a 4-for-20 shooting performance and just be happy the team claimed the victory?

“We still won,” Holiday said. “And I know I can do other things to affect the game.”

Holiday has been phenomenal against Phoenix’s megawatt backcourt of Chris Paul and Booker. According to Second Spectrum, in the 268 matchups in which Holiday is the primary defender on Booker or Paul, they’re averaging just 22 points per 100 possessions. Against all other Bucks defenders, the duo is averaging 39.7 points per 100 possessions. Holiday has forced Paul into an uncharacteristic 10 turnovers and Booker into eight.

One of those turnovers, of course, was the play that ended up deciding Game 5.

The Suns were rallying back from a 14-point fourth-quarter deficit behind clutch shot-making from Booker, Paul and Mikal Bridges and a succession of three missed free throws by Antetokounmpo.

Get access to exclusive original series, premium articles from our NBA insiders, the full 30 for 30 library and more. Sign up now to unlock everything ESPN+ has to offer.

After Paul cut the lead to 120-119 with 56 seconds to go, Booker had a chance to give the Suns the lead. He drove past P.J. Tucker into the teeth of the Bucks’ defense. Antetokounmpo rotated over to stop his drive, leaving Booker with little choice but to spin away from him.

Holiday had been eyeing the play unfold, while defending Paul near the 3-point arc. He couldn’t leave too early or Booker could find the open Paul. But he couldn’t be late, either, or Booker would’ve had a clean look at a shot out of his spin move.

As it has been so often in this series, Holiday’s timing was perfect. He dropped down as Booker was spinning, ripped the ball out from him without fouling, then rushed down the court on a fast break, where Antetokounmpo was in a full sprint, ready for the alley-oop.

“Honestly it was great team defense,” Holiday said. “I feel like we knew Booker wanted to take that last shot and played great defense on him and made him turn his back and he turned right into me. I guess I was just in the right place at the right time.”

Giannis Antetokounmpo walks Malika Andrews through Jrue Holiday’s crucial steal on Devin Booker as the Bucks are on the verge of an NBA title.

“First Team All-Defense play. It was a Defensive Player of the Year [play],” Connaughton said.

Up in the stands, Shawn and Toya Holiday watched the decisive sequence with a small group of Bucks family members and friends. They’ve been staying with their second-eldest son at his house in Milwaukee throughout these playoffs and traveling to each road game.

They were happy, but not overly so considering their son had just turned in his finest performance in the Bucks’ most important playoff game to date, which has left them one win away from their first title since 1971 with Game 6 Tuesday night in Milwaukee.

“He’s been through this before where his shot’s not falling,” Shawn says. “But people have to understand there’s more to the game than scoring. He’s running the team, controlling the tempo of the game through defense.

“So we just tell him to stay the course.”