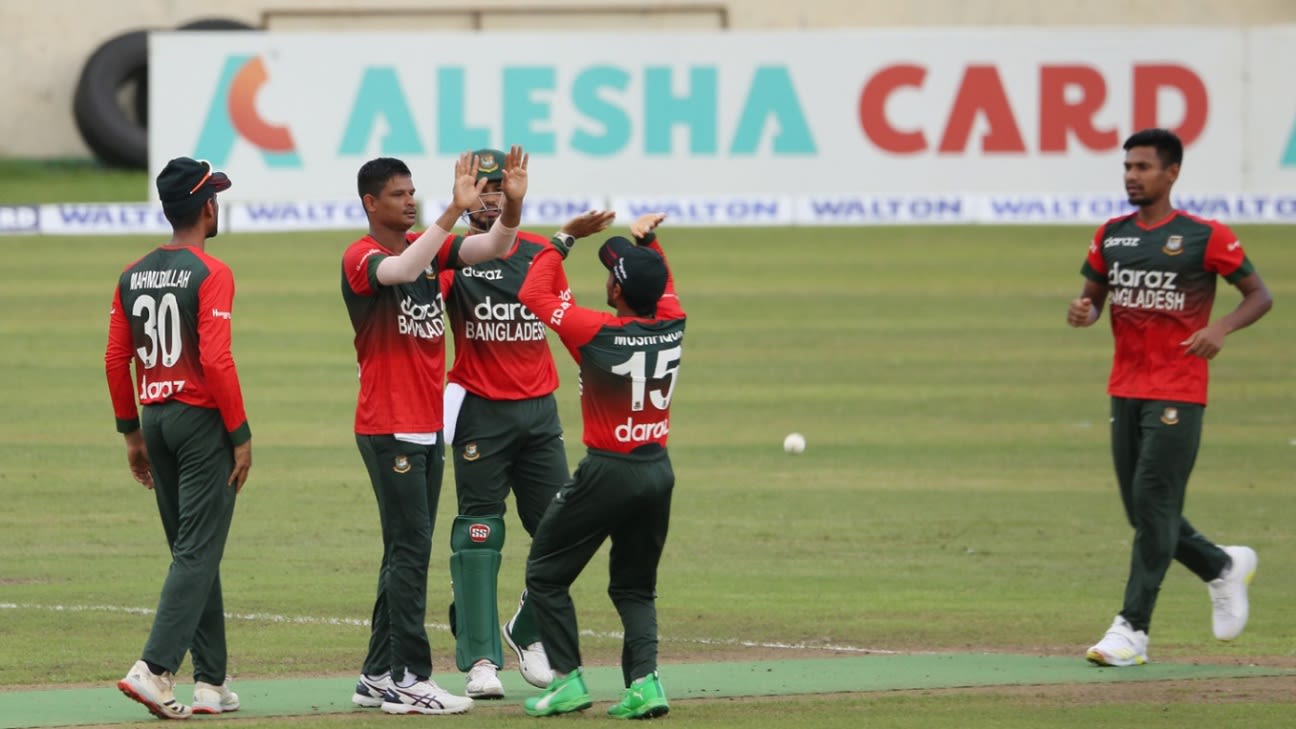 Bangladesh completed their first T20I series win against New Zealand, taking an unassailable 3-1 lead on Wednesday. Victory was hard-fought – the hosts eventually won by six wickets and five balls to spare despite bowling out the visitors for 93. The series win is Bangladesh’s third in the last three months – they beat Zimbabwe 2-1 in July and Australia 4-1 in August.

New Zealand were shot out for below 100 mainly thanks to Nasum Ahmed and Mustafizur Rahman. They became the first Bangladeshi pair to take four-wicket hauls in the same T20I innings. Then with a hint of tension in the chase, Mahmudullah settled nerves with two meaty blows.

While Shakib Al Hasan remains their premier spinner, Nasum was equally deserving of the title, bowling with a great deal of accuracy. He got Rachin Ravindra out in the first over of the day and was nonplussed by Finn Allen going for reverse sweeps, eventually getting him caught on the same shot.

Then later in his second spell, Nasum capitalised on Mahedi Hasan having already broken the flourishing 35-run stand between Tom Latham-Will Young.

Sniffing a weakness, he got one to spin back into Henry Nicholls’ stumps from outside off-stump from around the wicket. Next ball, a classic left-armer’s delivery against a right-hander had Colin de Grandhomme feeling for one that spun away as the edge was snaffled by wicketkeeper Nurul Hasan. New Zealand at that stage were tottering at 52 for 5 in the 12th over.

The Fizz follows up perfectly

Rahman followed Nasum’s double-wicket over with two of his own.

In the 16th over, Mohammad Naim took a good catch diving to his left at mid-on, after Tom Blundell miscued a lofted drive. Off the last ball of the same over, Rahman took a brilliant return catch off Cole McConchie, who was completely undone by an offcutter that ripped off the surface.

New Zealand still had Young going strong despite the mayhem. He swept and drove well to hit five fours and a six in his 46, nearly half of New Zealand’s score. But with wickets and overs running out, Young’s attempted swipe only found Mahmudullah at cover. Off the next ball, Mahedi took a simple catch after Blair Tickner gave a thick outside edge.

Fresh off his match-winning four-wicket haul in the third T20I, Ajaz Patel took little time to threaten. Bangladesh. After McCochnie removed Liton Das cheaply, Patel had Shakib stumped in the sixth over. The left-hander hared down the wicket, but missed the full delivery that yorked him as Latham grabbed the ball and effected the stumping.

Later in the same over, Mushfiqur Rahim fell for a duck, trying to play his favourite slog-sweep. Then, perhaps brought on for his last over much later in the game, Patel immediately created a chance only for Latham to fumble and reprieve Mahmudullah. He eventually finished with 2 for 9 off his four overs, with Bangladesh needing 19 off the last three overs.

Mahmudullah does the dirty work

Bangladesh made it tough for themselves, only to be bailed out by Mahmudullah. He added 35 runs for the fourth wicket with Naim, who was not out needlessly for 29. It rocked Bangladesh, who kept on batting conservatively, before Patel’s last over nearly derailed them. Mahmudullah however rode out that stumping chance in the 17th over, to hit Tickner over midwicket for his second six in the penultimate over. It was a decisive blow in the game.