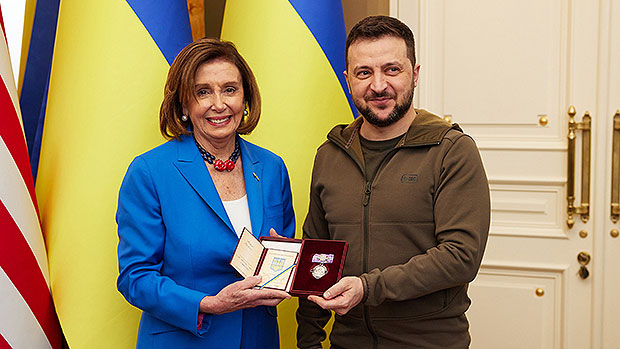 Nancy Pelosi made a surprise visit to Ukraine over the weekend to meet with President Volodymyr Zelensky and assure the people of his war-torn country that the United States backs them in their fight against Russia. The House Speaker, who led a congressional delegation in offering the support, became the highest-ranking US government official to visit Ukraine since Russia’s invasion more than two months ago.

Our Congressional Delegation was honored to meet with @ZelenskyyUa in Kyiv to salute his leadership and courage, to commend the Ukrainian people for their outstanding defense of Democracy and to say that we are with you until victory is won. pic.twitter.com/zkc588Qcrv

In videos shared by Zelensky’s office, per CNBC, Pelosi, Zelensky and other lawmakers are seen shaking hands and meeting on the steps of a building in the capital city of Kyiv. “You all are welcome,” Zelenskyy told the delegation in the clip. Pelosi responded, “We believe that we are visiting you to say thank you for your fight for freedom. We are on a frontier of freedom and your fight is a fight for everyone. Our commitment is to be there for you until the fight is done.”

The California Democrat took to her Twitter hours later to let the American people know what she was hoping to accomplish during the historical visit. “Our Congressional Delegation traveled to Kyiv and met with @ZelenskyyUa to send an unmistakable and resounding message to the entire world: America stands firmly with Ukraine,” she wrote on Sunday (May 1). “When we return to the United States, we will do so further informed, deeply inspired and ready to do what is needed to help the Ukrainian people as they defend democracy for their nation and for the world.”

Zelensky awarded U.S. House of Representatives Speaker Nancy Pelosi with the Order of Princess Olga for a “significant personal contribution” .

With @SpeakerPelosi, I met with @ZelenskyyUa and those on the frontlines of the war in Ukraine.

We had one purpose: to reinforce our commitment to our allies.

When we return, Congress must take up @POTUS‘s request for humanitarian and military aid.

There’s no time to waste. pic.twitter.com/yS0jIRYrx0

Taking Pelosi’s lead, Rep. Adam Schiff, who was part of the delegation, shared photos of the meeting with Zelensky on his own social media, writing, “With @SpeakerPelosi, I met with @ZelenskyyUa and those on the frontlines of the war in Ukraine. We had one purpose: to reinforce our commitment to our allies. When we return, Congress must take up @POTUS‘s request for humanitarian and military aid. There’s no time to waste.”

Following the meeting in Kyiv, Zelensky awarded Pelosi a Ukrainian civil honor called the Order of Princess Olga, which is bestowed upon women who have made outstanding contributions to the country and achieved success in politics. The medal was given to highlight Pelosi’s “significant personal contribution” to strengthening American/Ukrainian ties and “supporting sovereign, independent and democratic Ukraine,” read a statement from the Ukrainian government. Zelensky reportedly gifted Pelosi a Ukrainian flag signed by him and female members of the Ukrainian Parliament as well.

Pelosi and her delegation’s visit came two days after U.S. President Joe Biden asked Congress for $33 billion more in aid for Ukraine in their fight against Russia. Biden initially asked for $13.6 billion from Congress, which was enacted in the beginning of April.

Keep reading to see the enthusiastic reactions from Pelosi’s visit, below.

It is important Ukraine knows they have the full support from America and this act of diplomacy from her is really significant at this moment.

@SpeakerPelosi, 3rd in line to the presidency, vists with @Ukraine president @ZelenskyyUa !!! Love it!! pic.twitter.com/Edsak4Buhe

I just returned from Kyiv with @SpeakerPelosi where we met with @ZelenskyyUa to discuss how America can best support Ukraine in their struggle for freedom and democracy.

We discussed the need for continued security, economic, and humanitarian assistance from the United States. pic.twitter.com/MTdj7BM8Ju

No doubt, America is on Ukraine’s side. pic.twitter.com/mOR7JiX7Vs