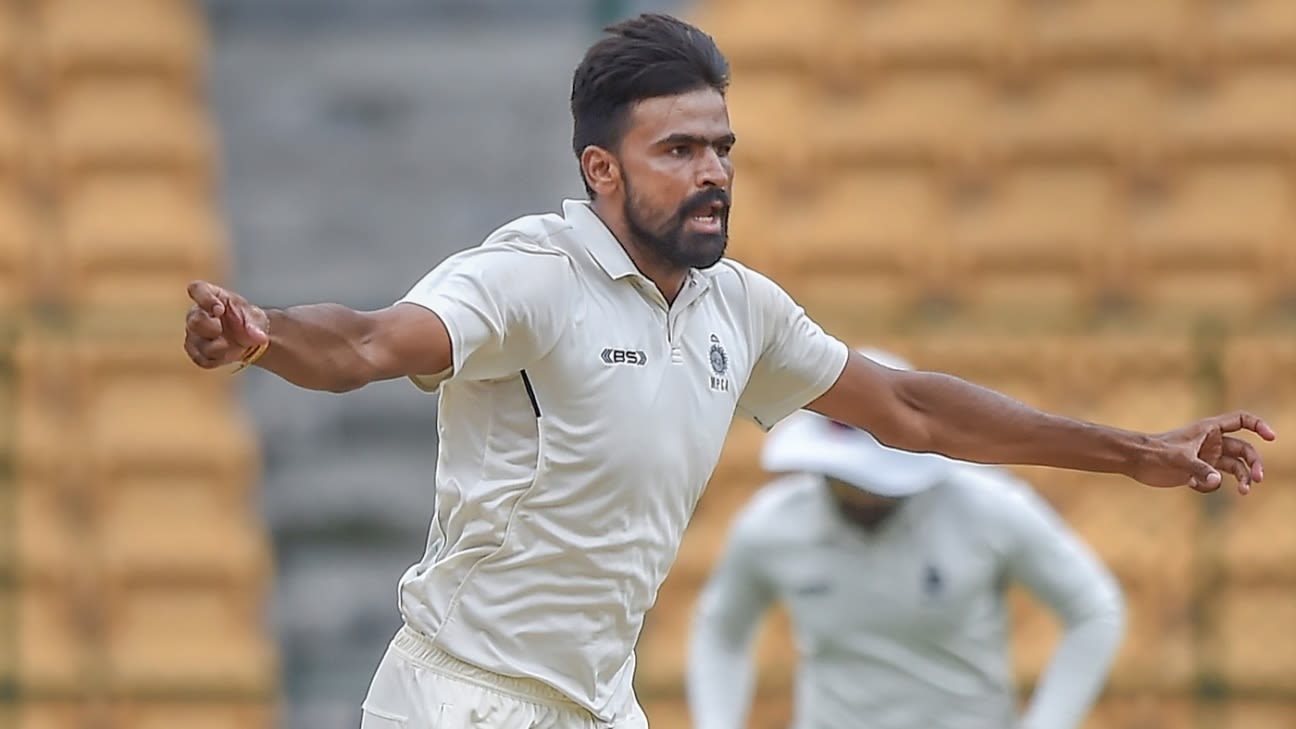 On possibly their biggest days in domestic cricket in the last 23 years, Madhya Pradesh banished nerves and bad luck, and overcame staunch resistance from Yashasvi Jaiswal, who was gunning for a fourth straight first-class ton.
Mumbai, who elected to bat and were cruising at 147 for 2, lost a clutch of wickets to leave the Ranji Trophy final in Bengaluru on an even keel. They ended the day on 247 for 5, with Sarfaraz Khan, the tournament’s highest run-getter, unbeaten on 40. He had Shams Mulani, the allrounder, for company, in their quest to try and stretch their first innings total.

The sun hardly peeped through on a leaden day, ensuring a relatively dry surface didn’t break further. With the ball turning right from the first over, MP employed both their spin options optimally, but it was their faster bowlers who kept plugging away and reaping rewards for their persistence and discipline throughout the day.

Most impressive of the lot was Gaurav Yadav, who wheeled away for 23 wicketless overs, despite creating several wicket-taking opportunities. Bounding in relentlessly, he opened up Prithvi Shaw’s inside edge and outside edge five times in a single over in the first hour, before Anubhav Agarwal reaped the rewards.

What that Yadav over did, where he had Shaw all at sea against the moving ball, was create doubts in his mind. As such, Shaw isn’t a leaver of the cricket ball; Agarwal’s accuracy only made it tougher. Drawn forward by a delivery that appeared to be moving away, the ball nipped back in off the seam to beat the inside edge and crash into the stumps to break an 87-run opening stand.

At the other end, Jaiswal tried to do what great Mumbai batters of the past have taken great pride in doing: grinding the bowlers down and then cashing in on some tired bowling later. While he managed to keep the bowlers at bay, largely refraining from playing away from the body against pace, he was particularly aggressive against spin.

His first boundary of the day was a six off left-arm spinner Kumar Kartikeya. Seemingly intent at trying to unsettle him, Jaiswal picked off a series of boundaries to get going. Just prior to that, though, he survived a run-out reprieve in the fourth over after a mix-up with Shaw. Jaiswal, who tucked the ball to square leg, was halfway down the pitch when he was sent back and only managed to make it as the throw was wide of the keeper at the striker’s end.

The first session had several instances where MP were left wondering ‘what if’. The run-out aside, Kartikeya managed to have Shaw jabbing at an arm-ball, only for it to lob over short leg’s head in the fifth over. In the 10th, Shaw’s thick outside edge off Yadav flew between second slip and gully as he attempted a flashy drive without any feet movement. Then, he beat Shaw five times in an over, before they had him.

Armaan Jaffer looked steady and resolute in defence, but hard hands proved to be his nemesis as he got a thick inside edge off Kartikeya to a shortish midwicket. It was an excellent piece of captaincy from Aditya Shrivastava that resulted in the wicket. Immediately after lunch, he specifically had the fielder there for Kartikeya’s arm-ball that fizzes in. Although the delivery that got the wicket wasn’t an arm ball, it was close to being one. A regulation left-arm orthodox bowled with a slightly faster trajectory skidded through to lob off the inside edge as Jaffer was gone for 26.

Suved Parkar was the next to go. Mumbai’s new No. 4, who only got a break for the knockouts because Ajinkya Rahane wasn’t available, managed all of 18 before getting a leading edge to midwicket where Shrivastava took a simple catch running back to give offspinner Saransh Jain his first wicket. This left Mumbai at 147 for 3.

In came Sarfaraz, who immediately shelved his natural game. It isn’t something he is known to do, but the dismissal of Jaiswal soon after, where he pushed away from the body to see Yash Dubey take a smart catch at gully, further had him shut shop and show signs of maturity in trying to see off the bowlers. Until then, Jaiswal’s was a knock studded with impeccable timing, oodles of concentration, a hint of luck and enterprise.

Jaiswal who brought up his half-century off 129 balls, started picking the gaps easily and when the fast bowlers bounded in trying to rough him up with short deliveries, he immediately gave them something to think about by ramping it over the slip cordon for a boundary. Jaiswal looked set for a fourth straight ton that would’ve had him join an elite club of Vijay Merchant and Sachin Tendulkar, before he literally had to drag himself off in disappointment, having poked at a delivery he would’ve left most times.

Like the other four batters who missed out, Hardik Tamore too got off to a start and then fell, playing for turn when there was none as he edged to slip to give Jain his second wicket, in the final session. This was shortly after he was dropped in the slips by Akshat Raghhuvanshi on 22. Sarfaraz and Mulani, who came together in the 75th over, saw off the rest of the day without too many hassles, intent on crease occupation and batting it out to stumps to try and resume their grind against the second new ball.

Purely in terms of the quality of cricket, it was a day where both teams played restrictively, trying to ensure one doesn’t concede ground to the other. It could change come Thursday.