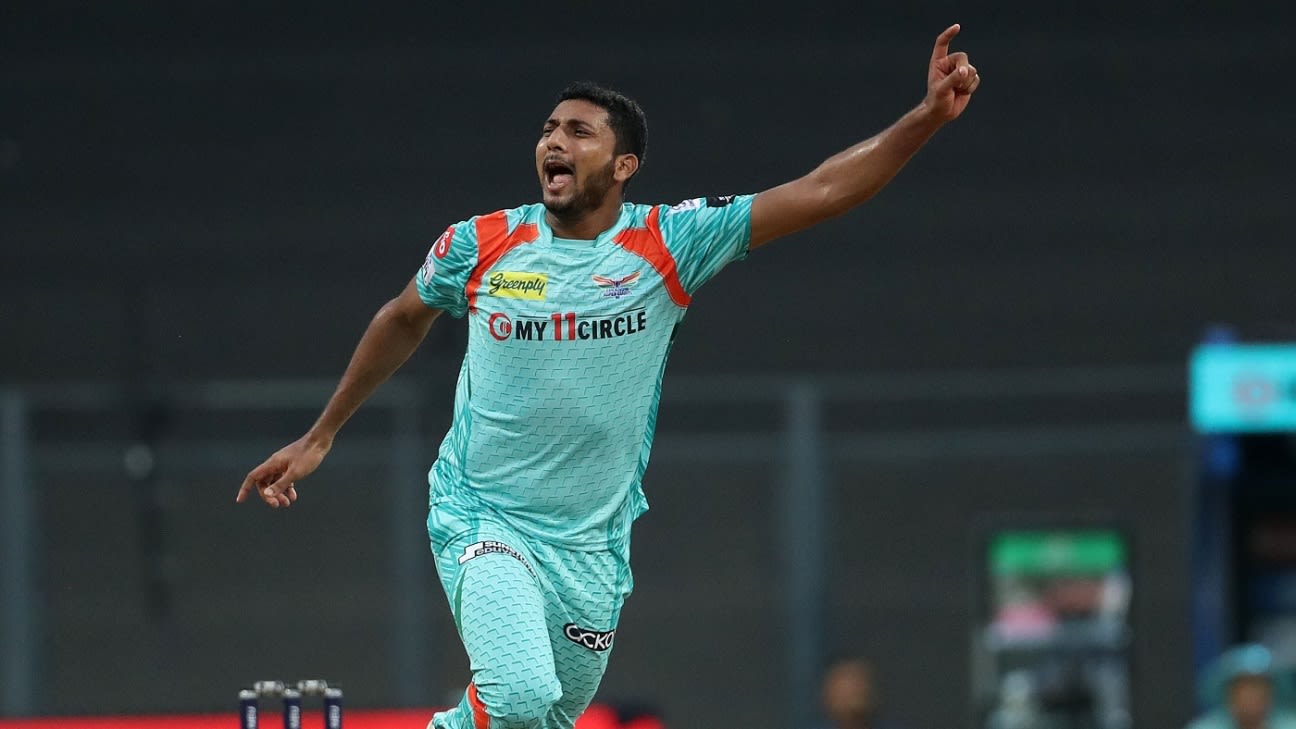 Half-centuries from KL Rahul and Deepak Hooda, followed up by a special spell from Mohsin Khan sealed a tight six-run win for Lucknow Super Giants over Delhi Capitals on Sunday. For Super Giants, the result appeared in doubt when their dropped catches and sloppy fielding gave Rishabh Pant’s men extra chances and bonus runs, but left-arm quick Mohsin’s dismissals of Pant, Rovman Powell and Shardul Thakur in his last two overs appeared to end the contest.

Axar Patel and Kuldeep Yadav did rally at the death with an unbroken partnership of 41 in 3.2 overs, but Marcus Stoinis successfully defended 20 in the final over, conceding 14, to seal the win.

It was the second time that the team winning the toss and batting first in this tournament was victorious. Rahul (77) and Hooda (52) struck a partnership of 95 in 61 balls after Super Giants opted to bat first, and it was a decision that paid off since they made early use of a surface that did not offer big bounce but stayed slow and low as the game progressed. Despite the lack of a big flurry at the death with wickets in hand, they still finished on 195 for 3.

It was a target that needed runs from Prithvi Shaw and David Warner in the second innings, and after both openers fell early, Capitals were always behind in the game. Despite Mitchell Marsh’s 20-ball 37, Pant’s 30-ball 44, Powell’s 21-ball 35 and Axar’s late burst of 42 not out in 24 balls, it was not enough. After nine games, Capitals now have more losses than wins, while Super Giants moved to second on the points table.

Pant started with five different bowlers in the first five overs, but Quinton de Kock was unfazed for the most of it, racing away to 23 in 11 balls, especially brutal on Chetan Sakariya. However, Thakur had him caught at point in the fifth over, bringing Hooda in to bat alongside a sedate Rahul.

Hooda started aggressively, hitting four of his first five boundaries through the covers off Axar and Kuldeep. Rahul, meanwhile, got to 27 in 24 balls, before hammering Kuldeep and the seamers in the next 11 balls to reach his fifty in 35 deliveries. Hooda, too, raced to a 32-ball fifty in the 14th over. Even though Hooda moved around in his crease, his shots weren’t audacious; he hit six fours and just the lone six.

Rahul charged along after his fifty. With Hooda falling to Thakur soon after his half-century, Rahul hit two more sixes off the seamers. But he wasn’t getting much support from the other end, with Marcus Stoinis, the No. 4, struggling to find fluency. Rahul fell in the 19th over as the third Thakur wicket, and a final-over six from Stoinis took Super Giants into the 190s.

A chaotic start to the chase

Warner and Shaw both fell early to the seamers, mis-timing a length and short ball respectively. Shaw was the first to go in the second over, top-edging a pull off the tall Dushmantha Chameera while Warner mis-hit a pull off Mohsin to midwicket.

That brought in Marsh and Pant early, and instead of looking to rebuild, they counterattacked. Krunal Pandya’s fourth over went for three fours and a six off Pant’s bat, and the fifth from Jason Holder went for two sixes and a four. To end the powerplay, Chameera was hit for two fours and a six. Together, the duo had struck 53 runs between overs four to six to finish on 66 for 2 after the powerplay.

And then came the ghost wicket. Marsh, on 37, and looking imperious against both spin and pace, tried to punch a skiddy K Gowtham delivery, only to miss it. The umpire gave him out caught behind, and Marsh walked back. However, replays showed that there was no spike when the ball passed the bat, and there was no way to pinpoint what caused the sound in real time. The dismissal came against the run of play, and Capitals were 73 for 3 after 7.1 overs.

Mohsin does the damage

With Pant around, and Powell having already produced a match-winning innings from the middle order, it was still game on after Lalit Yadav fell for 3.

The Super Giants fielders – including the captain Rahul – dropped regulation catches and slipped up in the field, and Pant and Powell made the most of the unforced errors to build another partnership. Gowtham, playing in the XI instead of Avesh Khan due to more left-handers in the Capitals line-up, was punished by Powell for 6, 6, 4 as ESPNcricinfo’s Forecaster gave Capitals a 24% chance of a win with six overs to go and 61 needed.

But Mohsin returned, and set Pant up with four length deliveries, including cutters, up front. He then went full and had Pant failing to flick from around his pads, and saw his stumps flattened on 44. Axar and Powell then found a couple of boundaries to keep the required run rate to around 12, but Mohsin’s final over provided the body blow. A length ball angling across was dragged by Powell to Krunal Pandya at deep midwicket. A few balls later, Shardul slog swept Mohsin to the same fielder, and it looked like the game was in the bag. But Kuldeep and Axar eked out 15 off the penultimate over from Chameera to take it to the final over.

Rahul turned to Stoinis – who hadn’t bowled all day – for the 20th, and he started poorly, conceding a six off Kuldeep’s bat. But Stoinis returned with four tidy balls to take the equation out of reach. With 12 needed off one ball, Axar hit a six that was mere consolation for a side that fell one boundary-shot short.