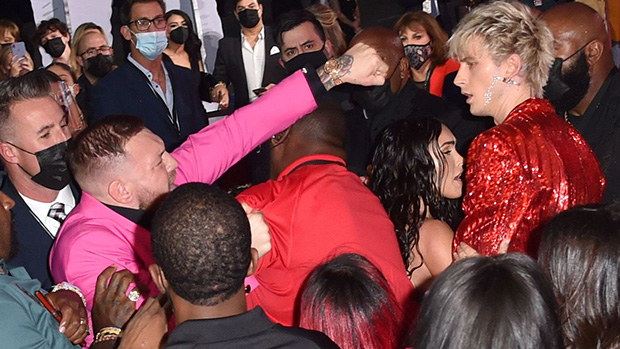 The MTV VMAs red carpet almost turned into the octagon when Machine Gun Kelly and MMA icon Conor McGregor apparently got into a heated confrontation.

It’s been about two months since Conor McGregor broke his leg in a fight with Dustin Poirier at UFC 264, but the MMA star seemed like he was in a fighting mood during the 2021 MTV Music Video Awards. Conor, 33, apparently got into a physical confrontation with Machine Gun Kelly, of all people, ahead of the Sept. 12 event, per TMZ. MGK, 31, was on the red carpet with his girlfriend, Megan Fox, when things apparently got heated between him and McGregor. Conor, in a pink suit, was photographed with his arm outstretched, as if he was taking a swing at the rocker. HollywoodLife has reached out to both camps for confirmation/clarification on the alleged scuffle.

why mgk and connor bout to fight. #vma pic.twitter.com/cMMT7CuPNN

In the paparazzi photos taken of the confrontation, Conor can be seen reaching for Kelly, but it doesn’t seem like he was able to get ahold of MGK – or if he ever got near him. Conor was held back by security on hand, with the “Notorious” fighter looking even more upset at the “My Bloody Valentine” singer. TMZ reports that Conor asked MGK for a photo, which MGK denied. TMZ also says its sources claim things “escalated into [MGK] pushing Conor,” which resulted in the Irishman stumbling back and spilling his drink.

Conor allegedly chucked the remains of his drink at Kelly, and Megan, who was nearby. MGK and McGregor’s respective teams broke things up before things got ugly. McGregor was given his walking cane – he’s still recovering from leg surgery following his UFC loss – and both he and MGK made their way into the Barclays Center for the event.

This is probably not how MGK and Megan anticipated the night going when they arrived on the red carpet. Ahead of the 2021 VMAs, the couple strutted their stuff while looking incredibly sexy. Megan wore a nude, sheer dress that was adorned with silver crystals. The mesh garment exposed her silver underwear, which complemented the whole piece. MGK walked in a sequined red suit, with silver crystals attached to his cheeks and nose. The couple looked like the definition of love – and in a heartbeat later, these lovers almost turned into fighters.