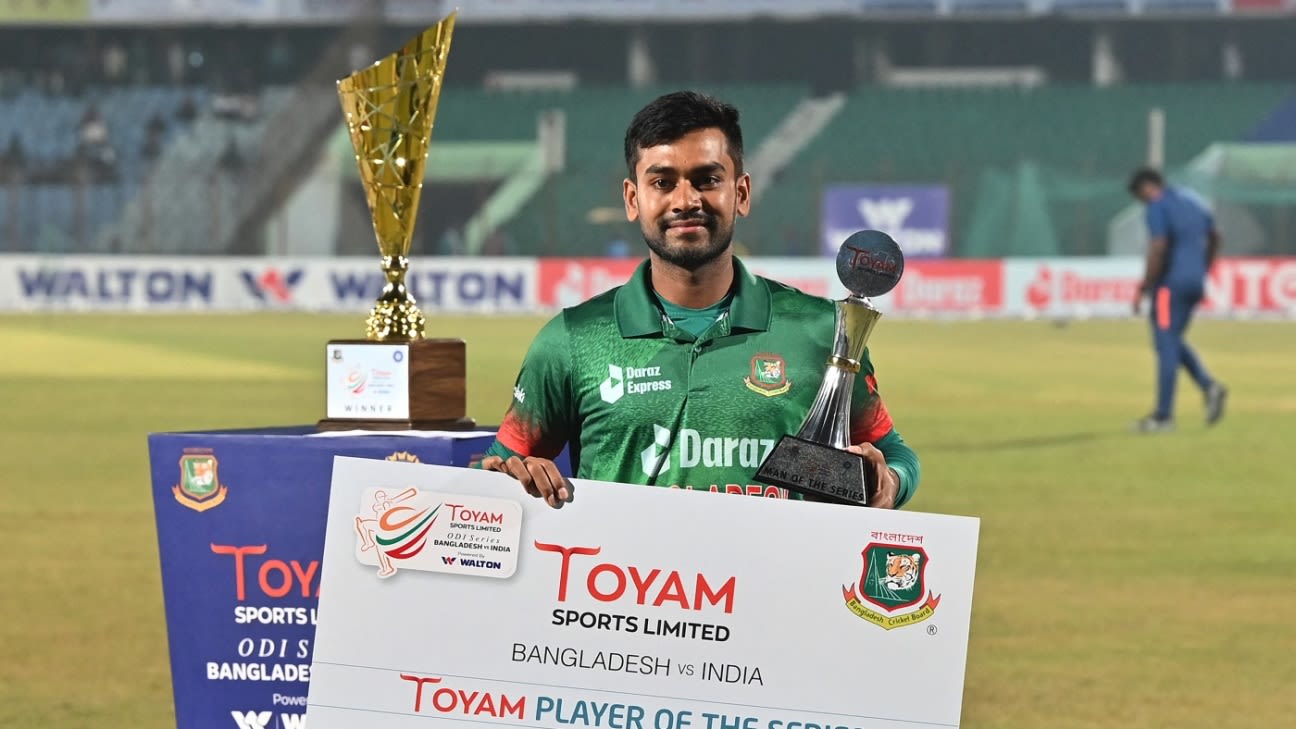 Mehidy Hasan Miraz‘s all-round performances throughout 2022 have earned him an all-format BCB contract for the period January to December 2023. He joins Litton Das, Shakib Al Hasan and Taskin Ahmed in the list of players with all-format contracts, while Mushfiqur Rahim and Shoriful Islam, who had full contracts in 2022, have one fewer format in their portfolio this time.

Mehidy previously had a contract for Tests and ODIs only, but proved himself in all three formats to get a promotion. He scored 637 runs at 24.50 in 29 games across formats, and took 59 wickets at 30.55 with his offspin. He was particularly effective in ODIs, with 330 runs at 66 and 24 wickets at 28.20, including a Player-of-the-Series showing against India in December. In the Dhaka Test later on that tour, he took a second-innings five-for to push India all the way in a chase of 145.
The BCB have given out central contracts to 13 Test cricketers in all – one fewer than last year. Zakir Hasan was given a Test-only contract, alongside Mominul Haque, Taijul Islam, Ebadot Hossain and Khaled Ahmed.
Mahmudullah has been put on a single-format contract – being cut from T20Is – while Najmul Hossain Shanto and Nurul Hasan were promoted to contracts spanning Tests and T20Is. Hasan Mahmud and Mosaddek Hossain were the new faces among the group who got T20I-only deals.

However, there was no room for Shadman Islam, Yasir Ali, Mahmudul Hasan Joy and Mohammad Naim in any category.

BCB’s cricket operations chairman Jalal Yunus said that Zakir and Mahmud were rewarded for their improvement in the previous year, while the board is hopeful that Joy, who broke through in the early parts of 2022, will take it up a notch to secure a contract next year.

“[Zakir Hasan and Hasan Mahmud] were rewarded for their performance from last year. Hasan Mahmud did well last year. We are encouraging fast bowlers,” Yunus said. “We have always noticed Zakir Hasan’s improvement through his time in the High Performance squads. His hundred against India definitely showed that he has the guts and ability.

“We tried Mahmudul Hasan Joy a lot last year. It is not a discouragement, but we want him to earn back the place. We are not discarding him. He can come back, but he has to work hard. Non-contract players are obviously available [for selection].”

As is the norm, the BCB didn’t reveal the players’ salaries, but ESPNcricinfo understands that all 21 cricketers will get a slight hike in their monthly pay this year. It is also unlikely that the BCB didn’t raise the match fees, as these are usually increased once every two years, so a raise was due this year.