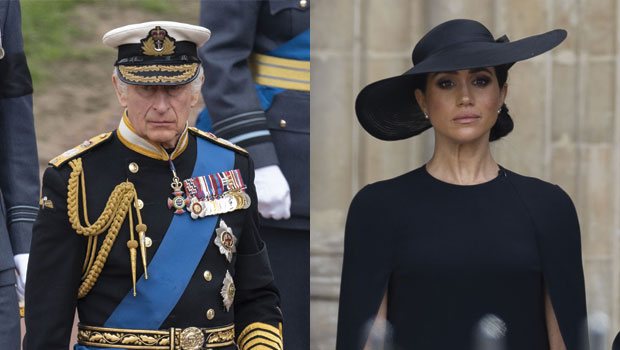 Meghan Markle, 41, has reportedly requested a “one-to-one” meeting with King Charles III, 73, before she and Prince Harry, 37, fly home to California following their weeks of public mourning of Queen Elizabeth II‘s death alongside the royal family. Royal reporter Neil Sean claimed a “very good source” told him the news in a YouTube video he posted on Sept. 17. “Allegedly, she’d now like before they return to California to have a one-to-one audience with King Charles III. That’s right: Meghan one-to-one with King Charles III. You heard correct,” he said. Neil added that the request was given to the new king in the form of a “formal letter.”

“Basically, according to this letter, she feels it would be an opportunity to clear the air, pull the rights from wrongs, and explain some of the rationale behind what they’ve been doing over the last two years,” he continued. He admitted he has “no idea” if Meghan’s request will be granted, but said it’s a “very brave move” from the former Suits actress. Neil also claimed it shows that Meghan is “the leader” in her union with Harry. However, he also claimed that Meghan may be the best person to make such a request because Harry is allegedly known to be “hot-headed”.

The written letter, which according to Neil is a customary way to request a meeting with the British monarch, came right before the royal family entered a week-long period of private mourning following Queen Elizabeth’s death on Sept. 8. The period of public mourning ended on Sept. 19, when the late queen was laid to rest next to her husband, Prince Philip, at the King George VI Memorial Chapel at Windsor Castle. She was also buried alongside her parents, the Queen Mother Queen Elizabeth and King George VI.

As fans know, Meghan and Harry were already in the United Kingdom when Queen Elizabeth died at Balmoral Castle in Scotland, and Harry rushed to be by her side when her medical staff became greatly concerned about her health. Prince Harry did not make it in time to say goodbye, but she was surrounded by several of her beloved family members, including Prince William and all of her children. Meghan, Prince Harry, Prince William, and Kate Middleton stepped outside Windsor Castle two days later on Sept. 10 to pay tribute to Queen Elizabeth II.

Despite any ongoing drama, the family put on a united front as they honored the queen’s life and legacy. Meghan and Kate even simultaneously broke royal protocol by hugging mourners outside Windsor Castle when they stepped out for the first time. And despite Meghan and Harry reportedly being uninvited from the late queen’s pre-funeral reception because they are not working members of the family, they showed up to her funeral to pay their respects, with Meghan even getting teary-eyed and emotional.