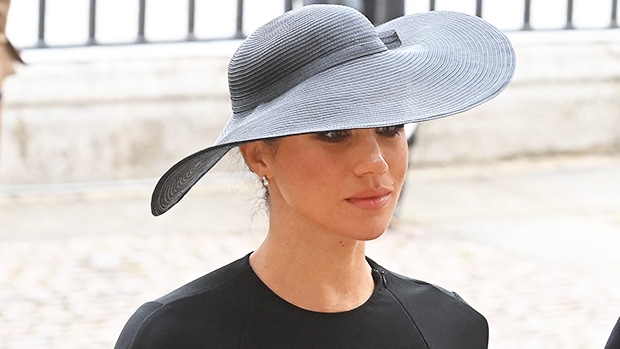 Meghan Markle arrived at Queen Elizabeth II’s funeral wearing a touching tribute to the late monarch. The Duchess of Sussex wore her beautiful pearl and diamond drop earrings that the Queen gifted to her during their first solo outing together in 2018.

Meghan wore a black dress with a cape and a wide-brimmed black hat for the Queen’s state funeral service. The 41-year-old and Prince Harry arrived separately at the funeral. Prince Harry walked behind the Queen’s coffin during its procession from Westminster Hall to Westminster Abbey.

The couple reunited at Westminster Abbey, where they walked side-by-side down the aisle behind the monarch’s coffin. The Duke and Duchess of Sussex walked behind Prince William, Kate Middleton, Prince George, and Princess Charlotte. They sat directly behind King Charles III and Queen Consort Camilla during the funeral service.

Prince Harry and Meghan were in the U.K. when the news broke that Queen Elizabeth II’s health was deteriorating. Prince Harry traveled to Scotland solo from London to be with his grandmother.  Unfortunately, he did not make it in time before the Queen passed away on September 8 at the age of 96.

The couple notably stepped down as senior royals in January 2020 and moved to Montecito, California. Their 2021 tell-all interview with Oprah Winfrey widened the rift between the royal family and the couple.

In the wake of the Queen’s death, the family has put aside their tensions in order to properly honor the long-reigning monarch. Prince William invited Prince Harry and Meghan to a walkabout with Kate to view floral tributes to Queen Elizabeth II on September 10. Prince Harry and Meghan held hands as they attended the Queen’s coffin procession from Buckingham Palace to Westminster Hall on September 14. Two days before her funeral, Prince William and Prince Harry, wearing his military uniform, attended a vigil with other members of the royal family.