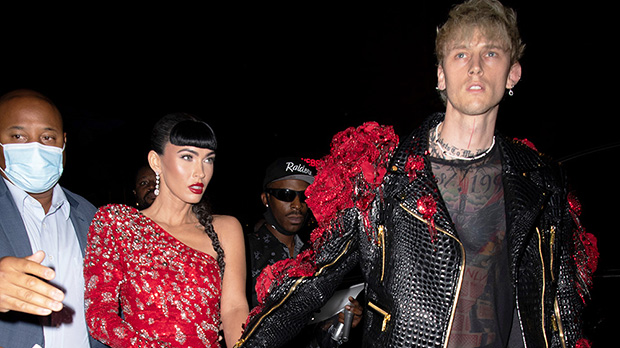 Machine Gun Kelly didn’t attend the Met Gala with Megan Fox, but he met up with her after the event to party the night away in NYC.

Megan Fox went from one red attire to another while attending an after-party for the 2021 Met Gala on Sept. 13. After wearing a ravishing red dress on the Met’s red carpet, she changed into a red mini for the post-event fun. While heading to Cathedrale restaurant, Megan wore a one-shouldered mini dress, which was adorned with jewels throughout. She kept her Met Gala hair and makeup, continuing to rock the blunt bangs, long braid and bright red lip, as well.

Meanwhile, she was joined by her boyfriend, Machine Gun Kelly, who held tight to her hand as they were swarmed by fans in the street. MGK showed off his usual unique style, wearing a completely sheer shirt, studded leather jacket and leather pants. Earlier in the evening, Machine Gun Kelly performed for fans in Central Park, although the show eventually got rained out.

The evening before the Met Gala, Megan was by Machine Gun Kelly’s side for the Video Music Awards. He performed at the show with Travis Barker, and also won the award for Best Alternative Video. Megan looked seriously sexy at the VMAs in a nude-colored, see-through dress, which revealed her lingerie underneath. She and Kourtney Kardashian proudly introduced MGK and Travis to the stage, and even referred to the rockers as their “future baby daddies” during the introduction.

It’s been more than a year since Megan and MGK surprised fans with their unexpected romance. The two met while filming Midnight in the Switchgrass in March 2020. At the time, fans didn’t know that Megan and her husband, Brian Austin Green, had decided to separate. Megan officially filed for divorce in November 2020.

Since going public with their relationship, Megan and MGK have not been shy about showing off their love for one another. They aren’t afraid to pack on the PDA at public events and on social media, and have made it clear that they’re madly in love. The future looks bright for these two!