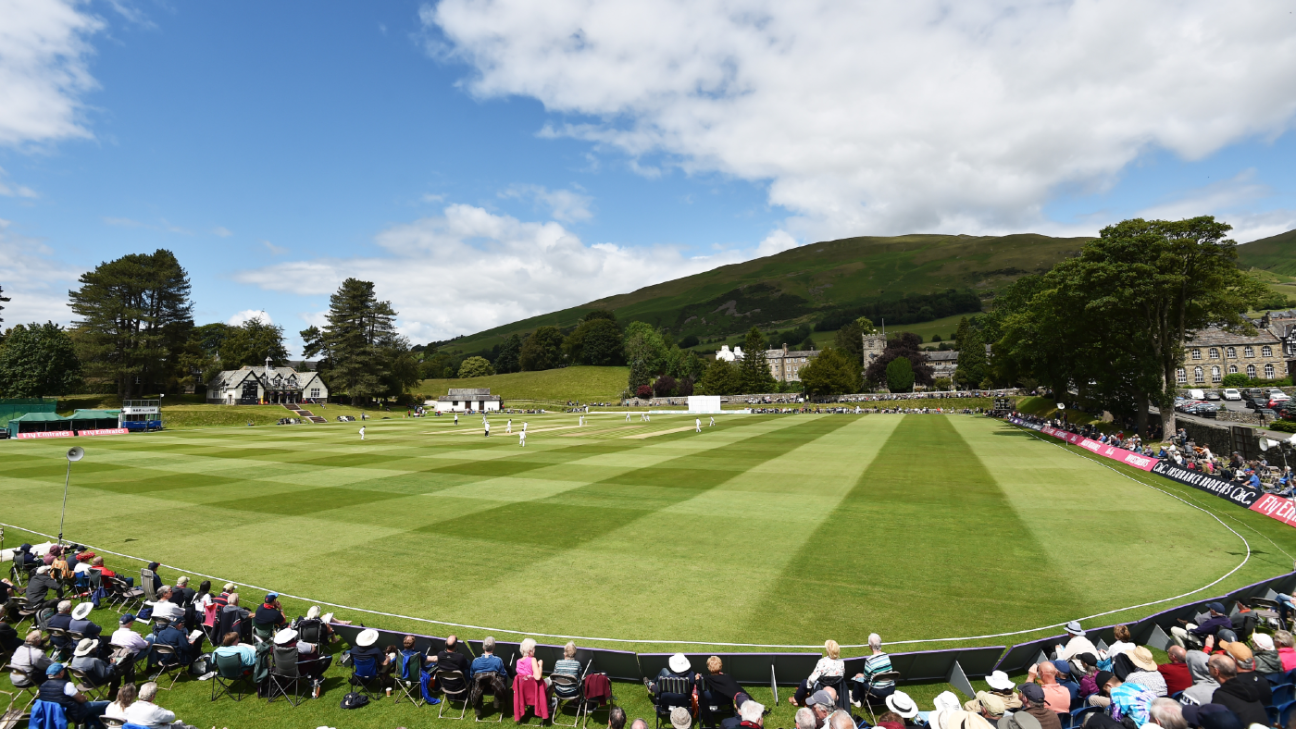 Away from the impending thrills of the Hundred, Cumbria’s homespun youngsters take on Lancs

And so we have returned to Sedbergh. For a few days this week at least, one of cricket’s caravans will rest in the shadow of the Howgill Fells. At distant stadia gaudier pantechnicons will roll up, filled with noise and novelties, but it was easy to forget such things on a summer morning in England’s North Country, when the heat lay like a cloak on one of England’s finest grounds.

Today Cumbria hosted Lancashire in what was classed as a warm-up game for the Royal London Cup, which begins here on Friday when Sussex are the visitors. And the irony of ‘warm-up’ games was plain on a day when drinks breaks were frequent, ambitious shorts revealed unfortunate legs and spectators hid like bitterns in the shadiest spots. Yet none of the folk who ringed the ground this morning or sat under the trees on the Loftus Hill side thought they were missing out on anything except sun cream.

The last time Lancashire visited this ground, a World Cup was being played and we were looking forward to an Australian summer. As though to mark that moment, James Anderson bowled Cameron Bancroft for 77 in the first innings before injuring his calf in the second and leaving the Durham captain to secure the draw with 92 not out. This occasion was different, more parochial in the very best sense. Most of Cumbria’s players represent clubs within the county boundaries and on Saturday they will compete against each other in league matches. Today, though, the rivalries between Cockermouth and Carlisle, Workington and Furness were forgotten and eleven cricketers came together in a side only three of whose members play for clubs outside the county boundary.

That is a matter of compulsion as well as desire. The regulations governing the national counties stipulate that eight of their players must be home-based and have an aggregate age of 200. For these purposes “home-based” can mean birth or the club a player represents or even his progression through a county’s school development programme. But however one cuts it, the onus on a county to develop local talent is clear. Fortunately, as Cumbria’s chairman Neil Atkinson explained, this is a policy the county had been pursuing for a couple of years before official injunctions were issued. With a little luck, therefore, the talent stream that has already produced Ben Stokes and Liam Livingstone will soon be offering more riches to the 18 fully professional counties.

“Ben and Liam are obviously two notable players but you’ve also got Jordan and Graham Clark and Liam Trevaskis,” Atkinson pointed out. “So to a certain extent we might be punching above our weight in producing first-class players. And these games are an invaluable opportunity for youngsters who aspire to playing first-class cricket to see the sort of standards involved.”

Viewed in that context, a game that might have seemed little more than a one-sided hammering attains a wider significance. Yet the problem for the national counties is that professional batters play with less fear than they did a decade ago and have added new shots to their repertoire. The put-it-on-a-sixpence line-and-length that might once have been enough to avoid dismemberment now only invites a scoop, a ramp or their reversed first cousins. It’s not that national counties cricketers do not know these strokes; some of them have played first-class cricket. But they rarely see them utilised with such freedom against balls that in almost all other games would require respect.

So much was very clear in the first half of this game as Lancashire galloped to 383 for 7 in their 50 overs. During this session the sometimes narrow line that divides the pro’s from the rest became a gulf, never more so, perhaps, than when Keaton Jennings and Luke Wells were putting on 157 in 22 overs for Lancashire’s second wicket, with Wells smacking four sixes in one over of Matt Siddall’s off spin. The former Sussex batsman was caught at long off for 86 by Matt Sempill off a Nico Watt leggie in the next over but as if exacting retribution Jennings smacked the successful bowler into St Andrew’s churchyard. The opener then reached his hundred off 102 balls with a cover-driven boundary off Matt Lowden but was bowled next ball. The crowd could barely summon the energy to applaud either event and there was no public address to prompt their appreciation.

As seems the norm during such gourmandising, someone has to go without and this afternoon it was Steven Croft, who was caught at the wicket first ball off Sempill. Just as he had done on this ground two years ago when bowled by one that kept low, Croft tossed his bat in the air and it performed a somersault before he caught it again. The fathomless charms of Sedbergh may be lost on him.

For the rest of us, they hit the mark as accurately as ever, and Lancashire’s later batters also savoured this true pitch. Dane Vilas, who has hardly been in his best form, made 82 off 46 balls and Rob Jones helped himself to a half-century before we settled down to consider one of those over-limit matches in which the second half bears limited relation to the first.

No one should blame Lancashire for this. People may blather on about the Royal London Cup being a development competition and for some counties it probably will be. But the resolve of the Old Trafford coaches was made clear when they took seven of Saturday’s T20 side to Sedbergh and their success in dismissing Cumbria for 174 in 43.3 overs was hardly a surprise. One of the newcomers, Jack Blatherwick took the first two wickets in four overs before being forced from the field with a back injury.

Regardless of Blatherwick’s injury, though, Vilas would have thrown the ball around. It was no surprise that eight bowlers were used with both Liam Hurt and Jack Morley getting eight-over spells in advance of the Royal London Cup programme. Luke Wells ended the game when he took his third wicket and Cumbrian supporters had to take what comfort they could from the gritty 35 made by the skipper, Gary Pratt, and the 38 compiled by Michael Slack, who had also picked up a couple of wickets. Pratt’s younger players, on the other hand, have seen what the first-class game is about. It is intriguing to ponder what they now make of it.

‘Mama June’ Recap: June Reveals She May ‘Die Within 6 Months’...