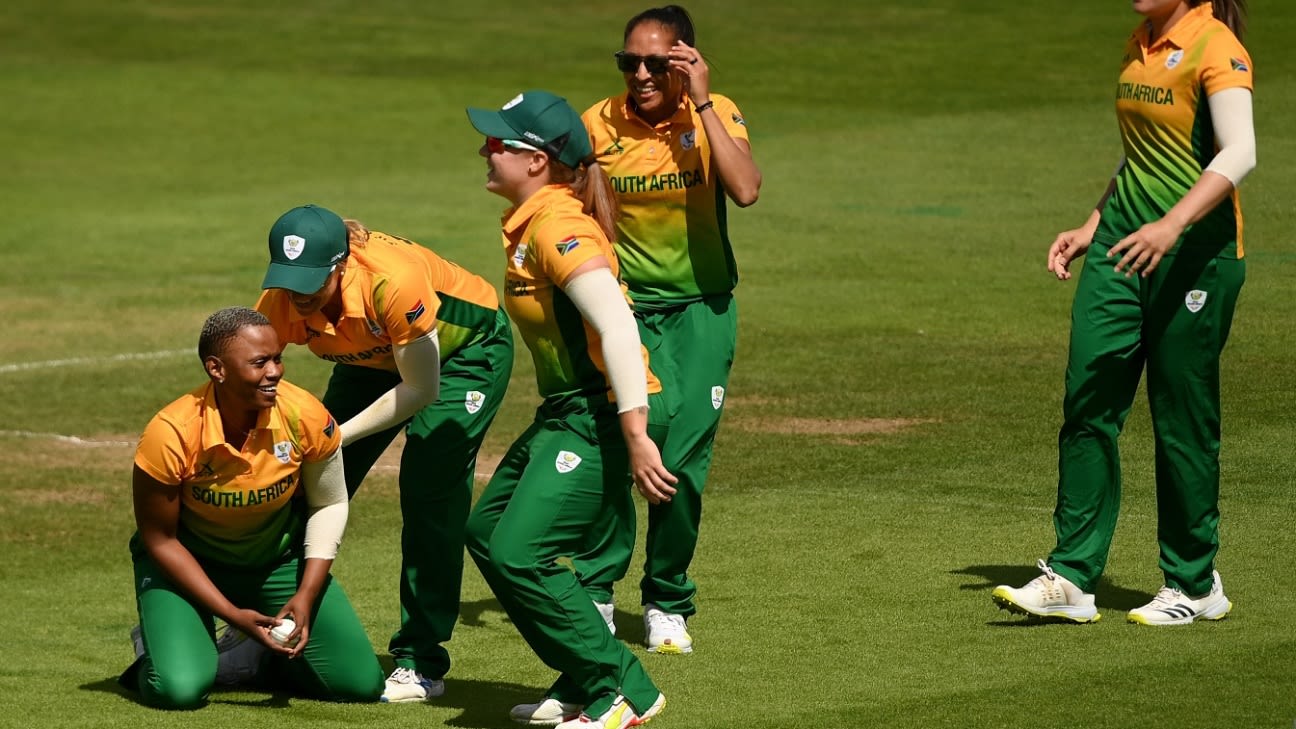 West Indies’ batting woes continued as they went down to South Africa by 44 runs in the second match of the women’s T20I tri-series in East London. After Marizanne Kapp‘s fifty propelled South Africa to 141, Masabata Klaas‘ four-wicket haul helped them bounce back from the opening game defeat to India.

A spin-heavy West Indies restricted South Africa to a competitive total on a slow and sluggish surface at Buffalo Park. After being asked to bowl first, Shamilia Connell dismissed Anneke Bosch early in the fourth over when she was caught by Britney Cooper while trying to heave it over the mid-off fielder. They ended the powerplay at 43 for 1, with Laura Wolvaardt playing a steady knock and bringing out her trademark cover drives.

However, the opener was out for 25 in the ninth over, off Shamika Gajnabi when Wolvaardt tried to slice a full ball on the off stump, and was caught by the wicketkeeper. Lack of footwork cost her her wicket.

It was Sune Luus and Kapp who lifted South Africa, as Kapp once again thrived at No.3. Walking in at 58 for 2 in the ninth over, the duo stitched together a key 63-run stand off 53 balls for the third wicket. Though the surface was conducive to slow bowlers, aiding them with turn and uneven bounce, Kapp played a cautious yet crucial knock to propel the team to an above-par total.

The seam-bowling allrounder brought up the team’s hundred in the 16th over when she hit Gajnabi for a straight four, with the scoring rate hovering between six and seven during her innings. In her innings of 52 from 43 balls – her second half-century in the format – Kapp unleashed four boundaries, converting low full tosses and half volleys to fours, and also keeping the scorecard ticking.

Her partner Luus struck 30 off 26 deliveries with three fours. The 18th over by Hayley Matthews saw both the set batters back in the dugout: Luus was run-out while Kapp was caught at long-off when she heaved a tossed-up delivery to try and up the scoring rate.

Scoring never looked effortless in East London, especially for West Indies, who had lost eight of their previous nine T20Is. That their star allrounder Stefanie Taylor had to miss out didn’t help their cause too. Taylor is still working herself back to full fitness after recovering from the injury she suffered while batting in the ODI series against New Zealand in September last year.

West Indies had made six changes to the XI that played against England in their previous T20I in December, still trying to find a partner to open the batting with Matthews. If Aaliyah Alleyne had opened the batting for the home series against England, they tried Britney Cooper on Saturday. But Cooper perished while trying to clear the mid-off fielder, and became Klaas’ first victim.

They never looked comfortable in the chase, as West Indies collapsed from 32 for 0 to 67 for 6. Three of those six wickets went to Klaas, who was on a hat-trick in the tenth over when she removed Matthews and Gajnabi off successive deliveries. While Matthews tried to slice and was caught at backward point, Gajnabi was trapped lbw.

Matthews tried to hold fort by scoring a patient 35-ball 23 before being dismissed. Cooper, Shamilia Connell and Shemaine Campbelle got to double figures but the target was far out of their reach.

Klaas, who came back in the 19th over to finish her quota, removed Afy Fletcher with a toe-crushing yorker to finish with a career-best 4 for 21.

Srinidhi Ramanujam is a sub-editor with ESPNcricinfo