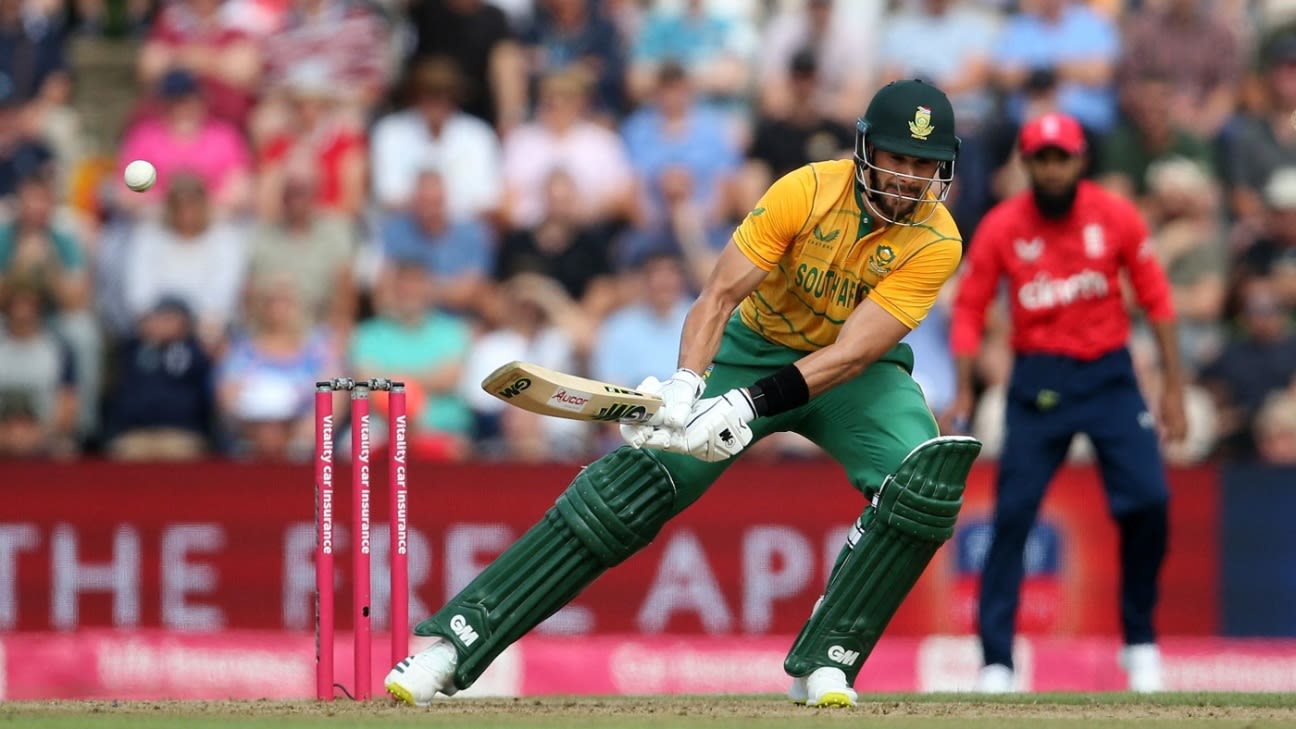 Aiden Markram won’t say it quite yet, but in spite of the bottleneck of top-order batters in South Africa’s T20I squad, he is fairly sure of his place to Australia for the World Cup. And you would think he should be.
Markram is ranked third on the ICC’s T20I batting rankings, averages 42.60 in T20Is, strikes at 146.55 and contributes with part time offspin. But he has only played one of South Africa’s eight T20Is this year, missed the series against India after contracting Covid-19 and was benched for two of the three games against England in favour of Heinrich Klaasen. So if he was feeling uncertain, it would be understandable. Luckily for him, South Africa have a plan and it almost certainly includes him.

“The communication has been really good from coach, management team and captain. It makes it easier to understand why they are doing it (rotating players). Building up to World Cups you want to pick your best squad and it’s important to give guys fair opportunities before you select the team,” Markram said ahead of South Africa’s two-match T20I series against Ireland, which starts on Wednesday in Bristol.

Although South Africa don’t have many matches left to experiment before the T20 World Cup (their two against Ireland are followed by three in India just before the tournament), they have tinkered with the top order in the absence of captain Temba Bavuma. They started off the England series giving Klaasen an opportunity at No. 4, but even though he is capable of hitting the ball hard, Klaasen may have had his run with scores of 20 and 19 against England. Markram replaced Klaasen for the third game and hit an unbeaten 51 in the deciding match.
Who bats above Markram is yet to be fully decided. Quinton de Kock will get in on reputation, if not current form, and Reeza Hendricks has done everything asked of him to open the batting with de Kock with three successive half-centuries against England. But if Bavuma is fit, that means either Hendricks is squeezed out or moved down the order, where Rilee Rossouw returned to the national set-up with an unbeaten 96 in the second match against England. If Rossouw moves down, that impedes on Markram and possibly further down where David Miller and Tristan Stubbs make up the middle order.

It’s a problem of plenty, which South Africa may not yet know how to solve apart from Markram, who can see a clear role for himself in that mix.

“Rilee, Tristan and Reeza are exciting for us as a team and creates some good competition for us as a squad. For me, it’s just about playing the situation. If they get us off to a flier, it’s about coming in and matching their intensity. And if not, it’s for me to up the intensity,” he said.

Energy in the middle order is where South Africa’s squad has seen its biggest change from the team they were a year or two ago. Rather than rely on one player to finish an innings – Miller historically – they now have Markram, Stubbs, Miller and Andile Phehlukwayo with Stubbs adding a new dynamic to the squad. “It’s exciting for us to have a player with his x-factor ability,” Markram said. “He (Stubbs) is on cloud nine now and it’s about staying there and enjoying every second. He is a bit of a free spirit and has always got a smile on his face.”

The hype around Stubbs may remind some of the same hope Markram brought with him after South Africa won the 2014 Under-19 World Cup and he was promoted to senior international cricket three years later. Markram said he “hasn’t quite got it worked out,” how to manage those expectations but his advice to Stubbs is that since “it’s been an awesome six months for him, the longer he can drag that out, the more awesome things will come for him.”

That’s how Markram has played since the IPL, where he had a “decent bit, not amazing” tournament for Sunrisers Hyderabad, with three fifties in his 13 innings. “Confidence is a massive part of this game. This IPL tournament provided me with that confidence, that belief that I was lacking [earlier],” Markram said.

While Markram may be fairly sure of himself in T20Is, he can’t be quite as assured in other formats because “I can appreciate that I might have not scored as many runs as I should have.” Specifically, his role as a Test player will come into sharp focus later this month, when South Africa play England for three games, starting on August 17.

Markram has been included in the squad, after missing the series against Bangladesh because of the IPL and following a particularly poor run. Before that, Markram had gone 13 Test innings with only one half-century and an average of 16.38. He has since been replaced by Sarel Erwee as Dean Elgar’s opening partner, and does not think he will find his way back into the XI anytime soon. “I am not even expecting to play to be honest,” he said. “If you look at the makeup of the top three, they’ve done really well over the past few series. I’m over the moon for the three of them.”

Asked if he could consider moving down the order in the longest format, as he has done in shorter ones, Markram said, “it’s something I would be open to,” but that South Africa haven’t had any planning around that yet. “We haven’t had too many discussions with regards to red-ball cricket. That will be next week,” he said. “I’ve only ever done top of the order stuff but it’s something I would be open to. If there is a role to fill in the middle order and the coaches and selectors think there is a space for me, I would be open to trying it and I would have to prepare accordingly. And make those slight mental adjustments.”

Wherever, or perhaps whether, he finds himself in the line-up, Markram remains committed across longer and shorter formats even as an increasing number of players find themselves choosing between them. “I would still love to be involved in all three formats and will put as much work as I can to try and keep that dream of playing in all three formats alive.”