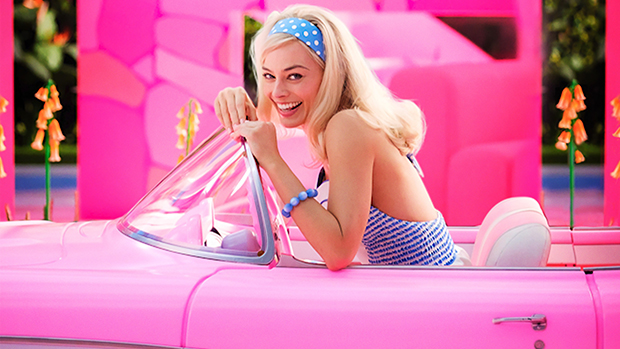 Come on, Barbie. Let’s go party! The first photo of the live-action Barbie movie was released on April 27 at CinemaCon, giving fans a glimpse of Margot Robbie as the beloved doll comes to life.

In the photo, Margot is wearing a blue and white striped outfit, a polka dot bow, and a matching bracelet. Her blonde hair has some serious volume, just like Barbie likes it. Margot is driving Barbie’s pink convertible, complete with pink and white leather seats. Pink is Barbie’s signature color.

Margot told Vogue that playing Barbie “comes with a lot of baggage … and a lot of nostalgic connections. But with that comes a lot of exciting ways to attack it. People generally hear ‘Barbie’ and think, ‘I know what that movie is going to be,’ and then they hear that Greta Gerwig is writing and directing it, and they’re like, ‘Oh, well, maybe I don’t.’”

The Oscar nominee stressed that Barbie is going to give fans something “totally different” than what they’re expecting. “We like the things that feel a little left of center,” Margot told THR. “Something like Barbie where the IP, the name itself, people immediately have an idea of, ‘Oh, Margot is playing Barbie, I know what that is,’ but our goal is to be like, ‘Whatever you’re thinking, we’re going to give you something totally different — the thing you didn’t know you wanted.’”

If there’s Barbie, there has to be Ken! Ryan Gosling will be playing Barbie’s longtime love, Ken, in the live-action film. Margot and Ryan will be joined by a star-studded cast that also includes Kate McKinnon, Michael Cera, Issa Rae, Alexandra Shipp, America Ferrera, Simu Liu, Will Ferrell, and Hari Nef.

The road to a live-action Barbie movie has been a long one. Amy Schumer was in negotiations to star in the title role back in 2016, but those talks fell through. Anne Hathaway was also in talks to possibly take on the role. Margot was confirmed to play Barbie in 2019, with Greta Gerwig directing the film. Barbie will hit theaters on July 21, 2023.