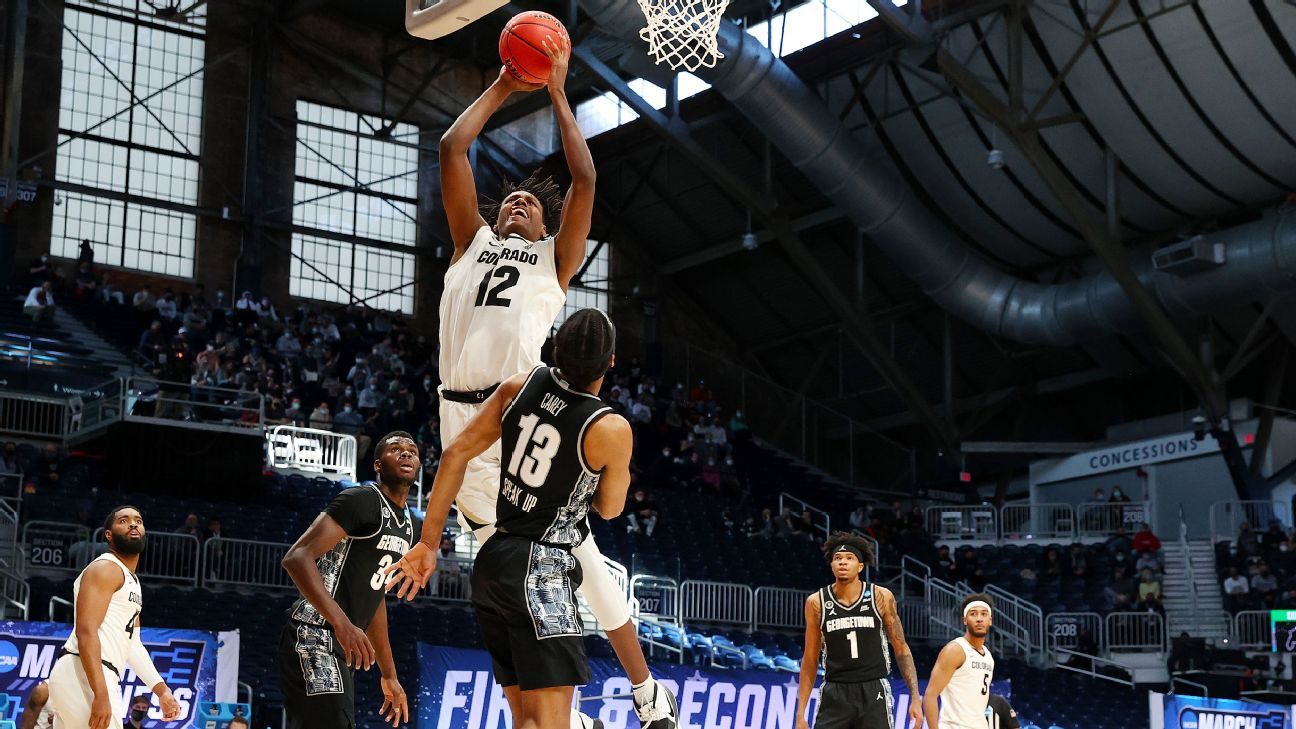 Ready for another day of March Madness? How’s your bracket? The first round of the 2021 NCAA tournament continues Saturday.

Friday’s first-round games were not kind to the Big Ten. The league lost two top-four seeds (Ohio State and Purdue). According to ESPN Stats & Information, that was the first time that had happened to the league since the tournament expanded in 1985.

The day wasn’t kind to the ACC either. The league had four teams lose (Clemson, UNC, Georgia Tech and Virginia Tech) on the same day in the NCAA tournament for the first time in conference history. But, Buddy Buckets and Syracuse went off.

Here’s a look at the best stuff from Saturday’s NCAA tournament action:

Down go the defending champs!

For the second time in three NCAA tournaments, the Virginia Cavaliers have been upset in the first round. This time, the loss came at the hands of the 13th-seeded Ohio Bobcats. The Cavs are the fourth reigning champ to be eliminated in round of 64 (UConn 2012, UCLA 1996 and Indiana 1988), per ESPN Stats & Information.

The game wasn’t without its nerves for Bobcats fans, though.

Do you have your emotional support buddy, @OhioMBasketball fans? pic.twitter.com/XJGEWf0sRn

Big 3s and clutch free throws helped send the Bobcats to the next round. It was the team’s third straight opening-round victory in the NCAA tournament.

The win was a reminder that another team from the state of Ohio deserves respect.

And the Bobcats even got a shout from Joe Burrow, who went to Athens High School in Ohio.

How bout those Bobcats

Freshman Jabari Walker had a career-high 24 points and was 5-of-5 from the 3-point line, his most 3s in a game in his career and a Colorado NCAA tournament single-game record. Walker hadn’t even attempted four 3s in a game before Saturday. Teammate D’Shawn Schwartz also hit 5 threes Saturday and now shares that record with Walker.

McKinley Wright IV had 13 assists, a CU tournament record. That included 8 assists in the first half alone. In the previous six NCAA tournaments, only one player had at least 13 assists in a game: Murray State’s Ja Morant in 2019 (16).

Colorado’s McKinley Wright IV drives for an impressive bucket and has a moment with his dad in the stands.

Unprecedented times call for new solutions. The Gonzaga Kennel Club found a unique way to bring the game to the fans.

March Madness in Covid times. @ZagKennelClub is hosting an outdoor watch party here on campus where students were able to register in groups of 6 for socially distant pods to catch the game on a 27′ outdoor screen. pic.twitter.com/TddvB9GXtP

It’s no question who the New Jersey Devils are rooting for after seeing UConn junior R.J. Cole‘s shoulder, especially after Rutgers already advanced on Friday.

No. 14 seed EWU put up a fight against No. 3 seed Kansas. That was in large part thanks to the Groves brothers. Tanner (the bearded star of Saturday) had 35 points and Jacob had 23.

The Groves bros are filling it up for EWU! 🦅@EWUMBB | #MarchMadness pic.twitter.com/jGIvSyw5XD

2nd 16:55 | More great ball movement by the Eags leads to a Tanner Groves triple! He’s got all seven for Eastern so far in the second half!

The Buffs drained 11 threes in the first half 🎯@CUBuffsMBB | #MarchMadness pic.twitter.com/HOA1NY6Dha

They don’t call them our managers THE LEADERS & BEST for nothing! #GoBlue 〽️🏀#MarchMadness#ForCompetitorsOnly pic.twitter.com/ZVIGJUAYxj

We are all this drummer today

Here’s what else you missed on Friday:

What a day. 🥵 #MarchMadness pic.twitter.com/4Lc16RCUvf

Javion Hamlet’s floater is in the middle of 13-seed North Texas’ 11-0 run in overtime as they stun 4-seed Purdue.

With Real Madrid’s triumph over Liverpool, a fourth Champions League title would be Zidane’s finest

NFL Draft 2021 – Who is Trey Lance, the draft’s most mysterious prospect?

PSG and Neymar are banishing their Champions League demons

PSG’s Champions League job vs. Bayern Munich is only half-done. Can Mbappe & Co. finish it on Tuesday?

Evander Holyfield returning to ring for exhibition fight vs. Kevin McBride on June 5

Stock futures are flat in overnight trading after S&P 500 closes...