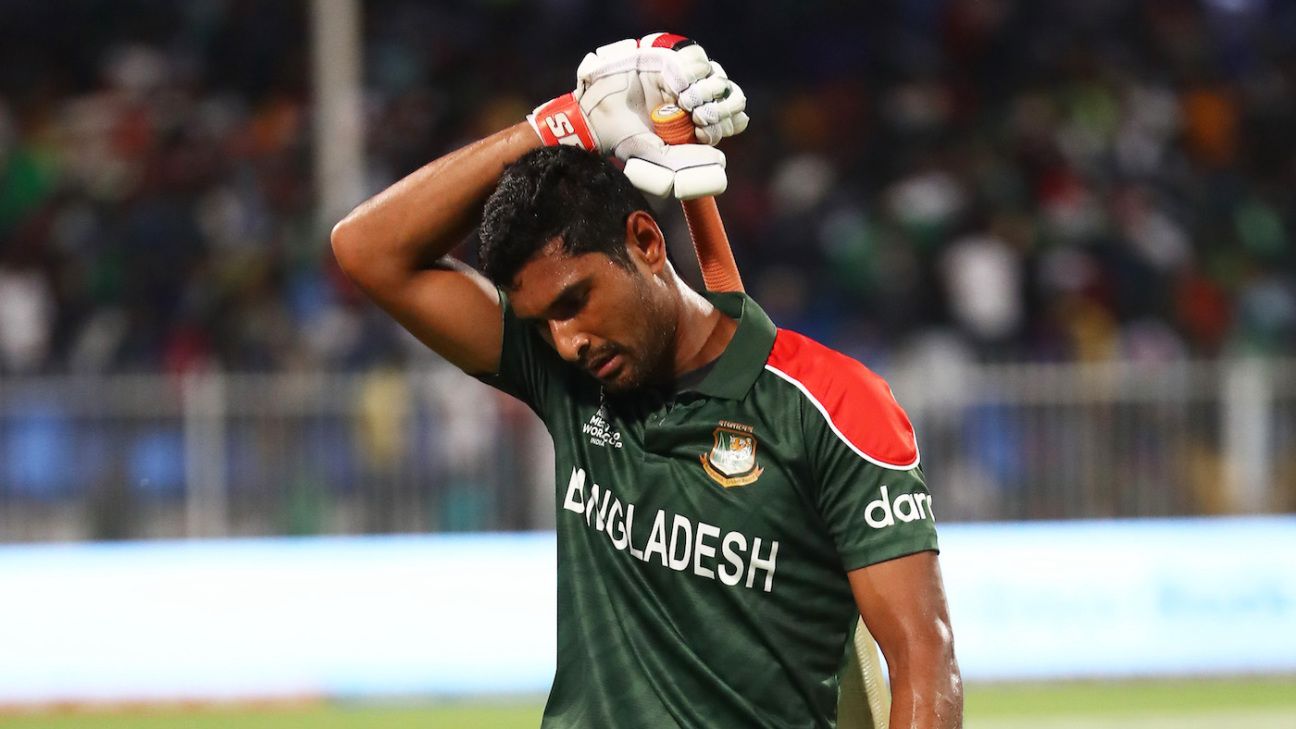 Bangaldesh skipper admits shortcomings, but has no plans to step down

Mahmudullah insisted that he would neither retire nor step down as captain in the aftermath of a T20 World Cup in which his Bangladesh side squeezed through their first-round group – despite losing to Scotland – before losing all five of their Super 12s fixtures.

Bangladesh were sixth in the ICC’s men’s T20I rankings heading into the World Cup and came to the UAE on the back of series wins against New Zealand (3-2) and Australia (4-1), but those achievements owed much to extreme home conditions, playing on pitches with low bounce that contrasted starkly with the surfaces they experienced during heavy defeats to England and South Africa in Abu Dhabi.

Their latest defeat, an eight-wicket humbling with 82 balls remaining against Australia in Dubai on Thursday, highlighted the brittle nature of their batting line-up in the absence of Shakib Al Hasan (injured) and Tamim Iqbal (personal reasons), as they were bowled out for a double-figures total for the second time in three days.

Asked directly if he would retire from T20I cricket after he had unexpectedly called time on his Test career earlier this year during a series against Zimbabwe, Mahmudullah said, “I am not thinking anything like it,” and insisted that a decision over his future as short-form captain was not his to make

“I can’t comment on it,” he said. “It is not in my hands. The decision is the cricket board’s. I have tried to keep the team together, to get the best out of the team. But definitely, there were shortcomings from my side.

“We didn’t perform well in this tournament. I’m still searching for answers, trying to find out what is missing, what we need to do. We sat together to work out where we are lacking and why we can’t perform better. Except the Sri Lanka and West Indies games, we performed poorly throughout the tournament.”

Bangladesh’s early exit means that they have still won only a single game against a full-member nation in men’s T20 World Cups, a six-wicket win against West Indies in the inaugural tournament back in 2007. When pressed on why Bangladesh had not made more progress since then in T20 cricket, Mahmudullah suggested that Sri Lanka’s comeback in their opening Super 12s game had been a major setback.

“It is quite complicated at the moment,” he said. “We are a team that works on flow. If we see how we played against Australia or New Zealand, we started well and we kept doing well. It’s the same in big tournaments like the T20 World Cup: if we could beat Sri Lanka in the first game, we could have that flow and boost the confidence. [But] there’s no point saying all this – we performed poorly.

“When you have these sorts of performances, it is hard to say much. There are a lot of areas we have to look at, especially our batting. The wickets that we have played on have been among the best for batting… we have a lot of things to figure out with our batting when we go back to Bangladesh. In T20 cricket, you have to have a good powerplay, especially when we don’t have so-called hard-hitters… but we haven’t done that at all.

“We have lacked awareness in this competition and we have to pick up on that. If you see in the Super 12s, we came close in two games against Sri Lanka and West Indies [but] we did some silly mistakes and lost those games. Other than that, we have been outplayed by the opposition.”

Russell Domingo, Bangladesh’s head coach, will doubtless find his position under scrutiny given the manner of their exit, and the fact that they had only four training sessions across the whole competition since their arrival in Muscat, Oman.

“Everyone should share the blame, not just one person,” Mahmudullah said, defending Domingo. “The whole team failed. We missed some practice sessions due to travel and injury concerns – fatigue was a factor.”