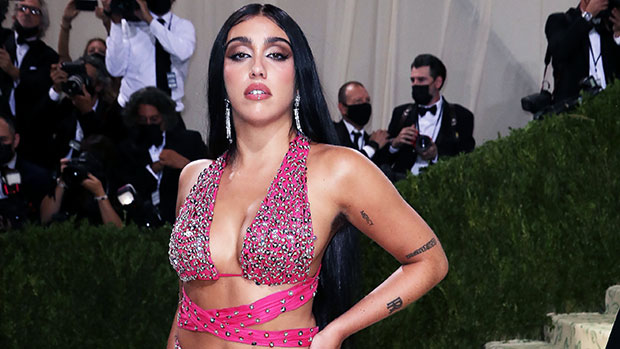 Lourdes Leon, 26, came to slay! Channeling her mother Madonna‘s unapologetic style, the bombshell brunette posed up a storm in an ultra sexy shredded dress while vacationing on the Grand Cayman Islands with her friend Eartheater (née Trinity Vigorsky), 33. Lourdes showed off the revealing black ensemble in the racy hotel room snaps, posted on Friday, Jan. 20 to her Instagram page. Her underwear showed underneath the tattered dress, which also showcased her golden tan.

The model kept her raven hued hair center parted and in a cascading mermaid like curl as she posed for a mirror selfie with Eartheater. Her makeup was also on point with a glossy dark pink lip, as well as a bold smokey eye with plenty of black eyeliner. She finished her ensemble with a gothic inspired letter necklace, keeping the rest of her look simple and understated. Meanwhile, Eartheater went for the opposite shade in a white dress with knots and a high slit. The Grecian inspired look showed off the singer’s tattoos, one of which peeked underneath a gold cuff bracelet.

“I [heart] @palmheightsgc,” Lourdes captioned the image, shouting out the five star property the two ladies are staying at. Located on Grand Cayman’s exclusive Seven Mile Beach, the Palm Heights property is the first luxury boutique property on the island. The hotel describes itself as encompassing “understated glamour” as well as “celebrating regional culture, cuisine, wellness” and more.

The song marked her first foray into music after modeling, however, she’s previously stated she doesn’t have a “specific” career goal. “Honestly, actors really annoy me and I can’t be around them. As for music, I can sing. I just don’t care about it. Maybe it’s too close to home,” she said to her mom’s close pal Debi Mazar in a piece for Interview magazine.

“I’ve been judged from a young age, but I think that privacy is the reason why I was able to keep my wits about me and not find myself in a mental asylum,” she also said at the time. “I want to figure out who the f–k I am before I let anyone else try to tell me who I am, you know?”

‘Madonna: The Celebration Tour’: All You Need To Know About Her Career-Spanning Extravaganza