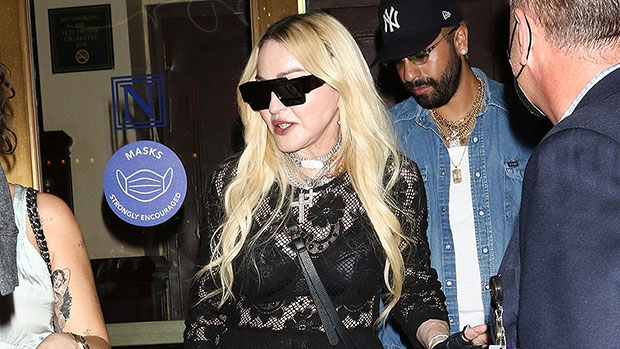 Madonna left little to the imagination on a night out in New York City. The superstar, 63, rocked a sheer floral lace dress showing off her matching black lingerie set as she left MJ: The Musical at the Neil Simon Theatre in Midtown Manhattan.on Saturday, July 30. Madonna kept her face hidden behind a black pair sunglasses, and accessorized with ’90s goth accessories including fingerless black leather gloves and a chunky pair of patent leather boots. She held onto a box briefcase as a handbag on her way out from the venue, looking like she’s barely aged a day.

A closer look revealed she sent a sign with her manicure, which included the Greek evil eye sign, meant to ward off bad spirits. She also sported a signature “M” ring as well was layered gold and silver bracelets, and cross pendants, reminiscent of her Like A Prayer era.

The “Music” singer has kept an irreverent attitude about aging, encouraging her fans not to “think” about that number so much. “I think you think about growing old too much. I think you think about age too much. I think you should just stop thinking about it,” she explained to New York Times Magazine. “Stop thinking, just live your life and don’t be influenced by society trying to make you feel some type of way about your age or what it is you’re supposed to be doing,” she also said.

Madonna’s Sexiest Pics: Look Back At Some Of Her Raciest Outfits Over The Years

And Madonna certainly seems to be doing that. There’s no shortage of sexy and revealing posts shared to her Instagram page, including a recent July 19 one where the Material Girl designer rocked a black bustier as she posed on a bed. The video, originally shared to TikTok, showed Madge posing up a storm with a top hat and sweater over top in what looked like a hotel room and then an SUV. “You wanna ride……………,” she teased in the caption, along with the hashtag, “#laidback.”

Julia Garner: 5 Things About The Actress Who Was Offered The Role Of Madonna In Biopic