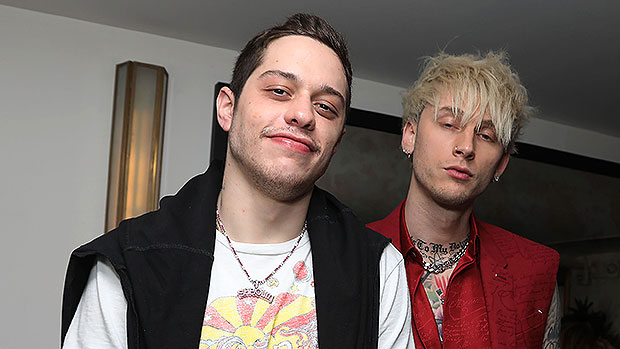 According to our sources, Machine Gun Kelly ‘couldn’t be happier’ for ‘his boy’ Pete Davidson amid his new Kim Kardashian romance.

As Kim Kardashian, 41, and Pete Davidson, 27, continue their whirlwind romance, their friends are weighing in on the situation. One of Pete’s pals, Machine Gun Kelly, 31, had some thoughts on the matter, as a source close to the musician EXCLUSIVELY revealed to HollywoodLife how MGK — whose real name is Colson Baker — was “all for” the Pete and Kim relationship.

“Colson and Pete haven’t had much time to catch up lately and discuss everything going on with Kim, but he couldn’t be happier for his friend,” our source shared. MGK and Pete have been friends for a few years and, after working on [the Netflix Mötley Crüe biopic] The Dirt together, became “best friends” the source stated.

“Pete is Colson’s boy, so as long as he’s happy and in a healthy relationship with someone who treats him with respect, then he’s all for it,” the insider revealed to HL. “Colson knows that Pete has a very public dating history, and it looks like this is going to be no different.” Pete has previously been linked to Ariana Grande, Kate Beckinsale, Phoebe Dynevor, and, well, a lot more women!

Things have definitely been heating up between Pete and Kim since they became “better friends” while working on their Aladdin skit for the SNL episode Kim recently hosted. Practicing their kissing scene all week “really brought their connection together faster,” a source recently shared with HL. The pair were then famously spotted hanging out at Knott’s Berry Farm in California, cozying up on a roller coaster together.

After that rendez-vous, Kim and Pete had a series of two dinner dates, with one in Pete’s native Staten Island on Nov. 2 and another at Zero Bond in NYC on Nov. 3. Fans of the KarJenner clan are excited about the potential pairing due to Kim’s sister Kourtney Kardashian, 42, being engaged to Travis Barker, 45, who’s also friends with Megan Fox, 35, and her beau, MGK. Considering the close connection between the couples, fans are loving the idea of a triple power couple threat!