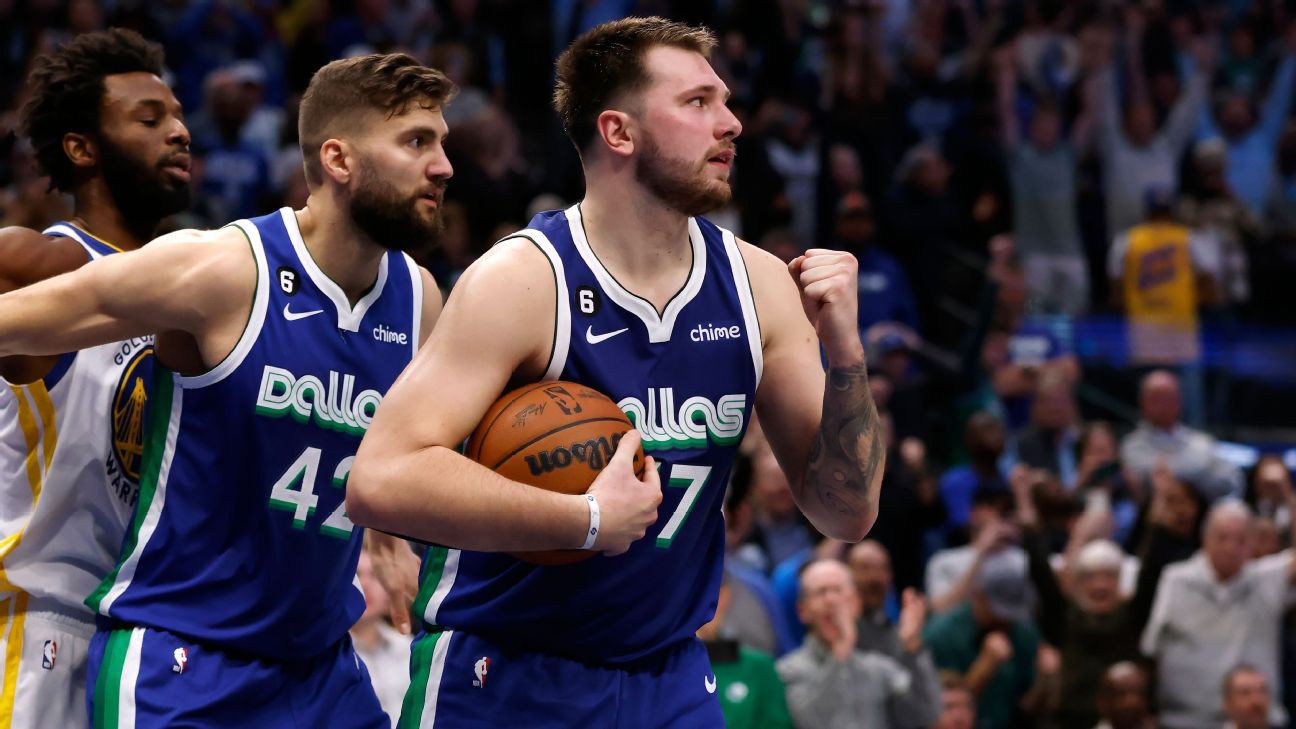 DALLAS — The full list of 40-point triple-doubles in the NBA this season: Luka Doncic 3, the rest of the league 0.

“Look, he’s one of the best in the world, and that’s what he does. Some of us can take him for granted. The man is special.”

Dallas desperately needed a special performance from Doncic on Tuesday. The Mavericks had lost their previous four games and five of the last six to fall a game below .500 before hosting the defending champion Warriors, who eliminated Dallas in the Western Conference finals last season.

Doncic, the NBA’s leading scorer, was dominant throughout the game while posting his league-high fifth triple-double of the season and 51st of his career. It was the fifth 40-point triple-double of his career, ranking behind only Oscar Robertson, Russell Westbrook, James Harden and LeBron James in NBA history, according to ESPN Stats & Information research.

“His size and his ball-handling skills keep you on edge the entire game, [and] that plus him being a three-level scorer, you’ve got to worry about everything,” said Warriors star Stephen Curry, who had 32 points, five rebounds and five assists in the loss. “Then obviously his court vision is unreal. It’s an offensive package of being a playmaker and scorer, and when he’s knocking down shots like he did tonight, it’s tough. You want to take something away from him, but he can make play after play.”

The Mavs built a 17-point lead in the first quarter, when Doncic scored 11 points, but had to come from behind in the fourth. Golden State seized the lead with a run after Dallas guard Spencer Dinwiddie, the only other proven ballhandler on the Mavs’ active roster with new addition Kemba Walker watching in street clothes, was ejected from the game with 10:52 remaining due to a flagrant 2 foul for elbowing Warriors guard Jordan Poole.

Kidd called timeout with 9:46 remaining to get Doncic back in the game a few minutes earlier than he normally returns after his rest at the beginning of the fourth quarter. He had nine points and three assists down the stretch, feeding teammates for go-ahead buckets on all three occasions. And Doncic was particularly proud that he had three of his four steals in the fourth quarter, as well as a blocked shot on a Curry layup attempt.

“I just participated, giving everything I got,” said Doncic, who was 14-of-27 from the floor. “I was really tired at the end, but we needed this game. I think we deserved this win, and we for sure needed this win.”

Curry had a chance to tie the game or take the lead but was called for a traveling violation while trying to set up for a 3 with 10.1 seconds remaining. He said he didn’t think it was a travel, but Curry criticized himself for a making a “dumb play” by not driving for a layup and attempting to launch a “hero shot.”

After Dallas forward Dorian Finney-Smith made one of two free throws with 4.4, Golden State got an opportunity to send the game into overtime. A beautifully designed out-of-bounds play resulted in a wide-open 3-point look for Klay Thompson from the left wing, but the ball rimmed out, punctuating an off night for Thompson (five points, 2-of-9 shooting) and sealing the Mavs’ win.

“I was scared, I’m not going to lie. It’s Klay,” Doncic said. “He’s not going to miss many open shots. I was really happy when it didn’t go in.”

Hold or trade – Second half fantasy outlook for NHL all stars

Giannis Antetokounmpo drops 54 as Bucks come back from 21 down