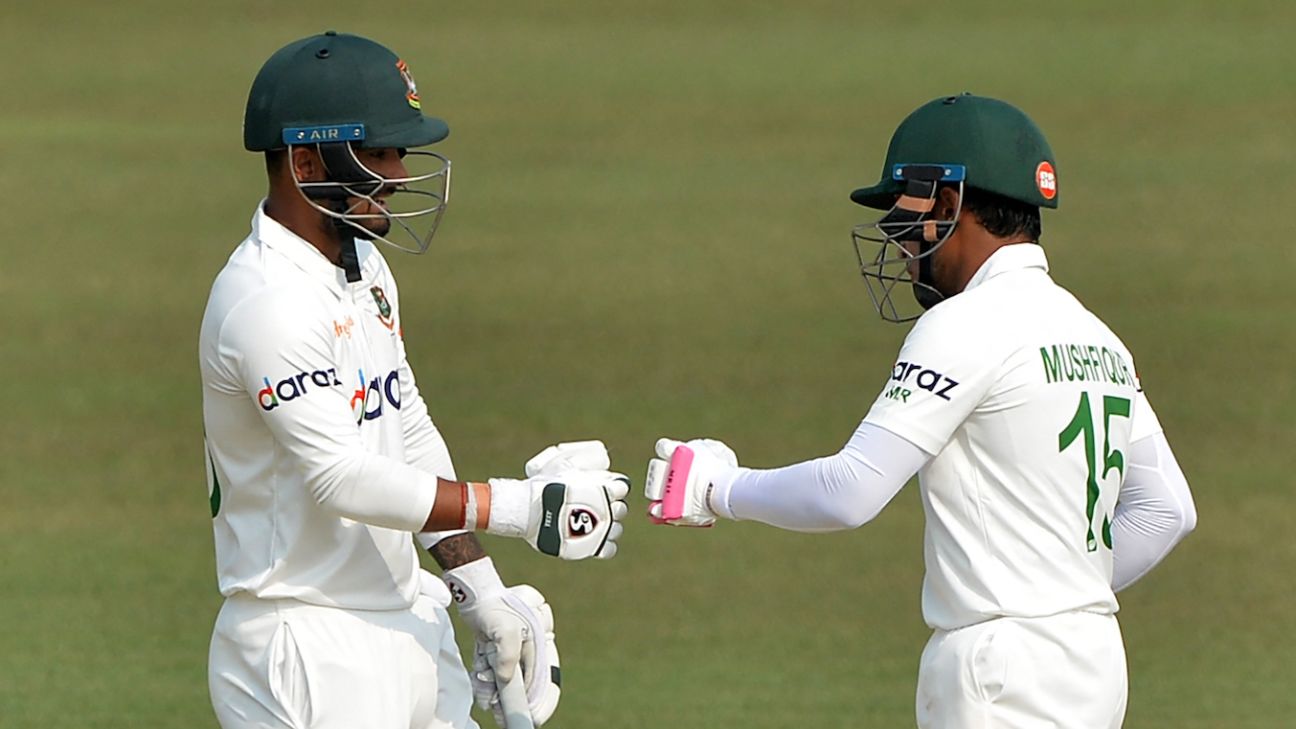 On a day in Chattogram that began with an earthquake and then had smoke from a nearby fire billowing above the stadium, Pakistan blazed through the Bangladesh top order to get the early advantage in the contest. Once Bangladesh found the ground beneath their feet, though, there were no aftershocks. Pakistan’s early morning menace melted away in the watery winter sunshine of the afternoon, and from four down for 49, Mushfiqur Rahim and Liton Das put on an unbroken 204-run partnership to wrest back control on the first day, the home side sitting pretty at stumps at 250 for 4. It’s just the second time Bangladesh have ever put on a partnership of 200-plus in Test matches against Pakistan.

Liton’s maiden Test century decorated the day for Bangladesh, a fighting knock from a man who has been knocked down a fair bit of late. Dropped from the T20 side after Bangladesh’s torrid World Cup campaign, Liton got a vote of confidence from captain Mominul Haque, who said Liton was strong enough to recover mentally. Coming in to bat with the top and upper-middle order decimated, Liton fought off the new ball, the spinners, a niggle as he approached his hundred, and, under the fading light, a few overs with the second ball, coming out of all of that unscathed to guarantee he would be out there on the second morning to take on Pakistan’s bowlers once more.

His partner, Mushfiqur, has enjoyed a similarly redemptive story arc on the first day. He, too, did not play the T20I series and was involved in a spat with his board. He looked especially fresh today. He was instrumental in turning the momentum around in the early overs of the partnership, removing the sting of Shaheen Shah Afridi with the expertise of a beekeeper and setting the wheels in motion for a Bangladesh revival. By stumps, he, too, was closing in on a hundred, just 18 away from his eighth Test match three-figure score. The last two times he reached that mark, he had gone on to score double-hundreds.

In the morning, Mominul Haque continued the trend Mahmudullah had started in the T20Is by besting Babar Azam at the toss, and, like Mahmudullah, opted to bat first.

But it was Pakistan, who called the early shots, dominating the morning with a new ball that found a surprising amount of swing. However, with Saif Hassan willing to drive on the up and put anything too straight away to the leg-side boundary, it was the effort ball from Afridi that fetched Pakistan’s first wicket. The left-arm quick banged one in that threatened to lodge up the batter’s nostrils, and the desperate fend from Saif found Abid Ali at short leg.

His opening partner Shadman Islam fell to an inswinging ball from around the wicket from Hasan Ali – who had been somewhat wayward up till then – that trapped him in front, beating the left-hander on the angle. Spinner Sajid Khan got into the act shortly after, coaxing an edge from Mominul, which the umpire somehow missed, only for the decision to be overturned on review. Pakistan threatened to run riot when Faheem Ashraf had Najmul Hossain Shanto caught sharply at point by Sajid, bringing Mushfiqur and Liton to the crease.

The pair survived the Pakistan offensive in the first session and saw off the early post-lunch overs cautiously, before getting comfortable with Pakistan’s five-pronged attack. Nauman Ali had kept a lid on scoring early in the middle session, but Bangladesh tended to get a boundary from the other end more often than not. They were more sure of their footwork, while the bounce stayed true when it came to both spin and pace, and the batters gradually began to find their timing and confidence. Afridi was punished by Mushfiqur whenever he went full or wide, the batter finding the gaps in the off-side with trademark precision.

Liton, meanwhile, wasn’t to be outdone, and used his feet to the spinners very well. A six over wide long-on after dancing down the track was the most explosive shot of the session, but it also indicated Bangladesh’s comfort with charging Pakistan’s spinners, who do not have the wrong’un in their armoury. In the period after drinks, the run-scoring against the spinners picked up markedly, and Pakistan were forced to bring back Hasan. But with the pitch offering very little to the bowlers, Bangladesh appeared to have realised this was their chance to notch up a competitive first-innings total.

Pakistan might have hoped the tea break would disrupt Bangladesh’s momentum, but they only returned rejuvenated. Aside from a sharp chance Liton offered to square leg when on 67, there was nothing for Pakistan, who found themselves firmly shut out as the bowlers came back for second and third spells to try their luck. The spinners might have been more probing with their lines; Sajid, in particular, was guilty of dropping the ball too short, with Abid at short leg paying the price, but for the most part, Bangladesh didn’t need any assistance from the bowling. Liton picked up his hundred with a quick single in the 78th over, putting in a dive to get to roars of approval from the home faithful.

As the sun began to set and the floodlights came alive, there was a faint glimmer of hope for Pakistan with the new ball due. Liton was struggling with cramp by now and the light was fading fast; this was as good an opportunity as ever to pick up another wicket. Bangladesh’s defences, however, were not to be breached, the duo bringing up the 200-run partnership before the day was out. It’s just the sixth time in Test history when four wickets have fallen before the fifty mark only to be followed by a double-century stand for the following wicket.

The partnership broke records left, right and centre, and as the players walked off, Bangladesh may just begin to feel they have a shot of finally getting a win over Pakistan in this format.